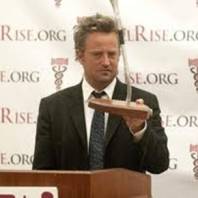 “When a court orders an addict to treatment instead of prison,  we All Rise” ~ Martin Sheen

I am always elated when a person conquers their demons, and then uses it to help elevate someone else. Amazingly, Matthew Perry is one of many individuals working with All Rise who are lending their celebrity to help bring about awareness on issues that would only fall off the lips of the poor, imprisoned, or invisible. Matthew Perry made a recent appearance on Hardball to discuss how his drug addiction could have easily landed him into prison. Although he should have been riding high on his success with the hit television show The Good Housewife, Matthew disclosed how he needed a certain amount of pain pills to get him through each day. Matthew is thankful his activities never got him arrested, but he stated that is not the case for the majority of Americans. Matthew along with many others are advocating for government funding to Drug Courts because they make sense, cost-effective, and measurable. The biggest barrier for prevention programs aren’t funding, it’s for profit prisons. As long as sending people to prison is incentivized, there is no incentive to find solutions.

According to the All Rise National Association of Drug Court Professionals website:

For centuries, anyone with business before the court has heard two words called out by the bailiff or court officer. Two words that demand everyone in the courtroom to come to attention. Two words that create order amidst chaos. Those two words are ALL RISE!

In Drug Court, these two words have an even greater meaning. These simple words capture the essence of what a Drug Court does. ALL RISE describes how instead of imprisoning an addict, Drug Courts insert hope and support into the very lives of people who the traditional justice system says are hopeless.

Whenever one person rises out of addiction and crime, we ALL RISE. When a child is reunited with clean and sober parents, we ALL RISE. When the intergenerational cycle of drug addiction in a family is broken and healing begins, we ALL RISE.  Whether the charge is driving while impaired, theft, burglary or any number of other addiction-driven offenses, we ALL RISE when a Drug Court guides the offender past the chaos and wreckage and toward recovery.