byDeona Hooper, MSW
in Global, News
0
ADVERTISEMENT
Share on FacebookShare on TwitterShare on LinkedinShare on PinterestShare via EmailShare on Reddit 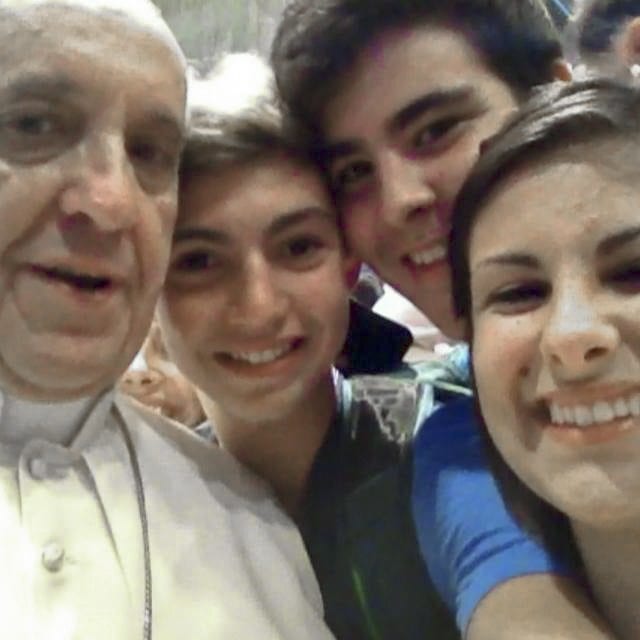 Pope Francis has certainly made an impression on the people with his compassion for the sick and less fortunate. However, what has been received as a call for capitalism to share wealth with the poor is not garnering any favor with right-wing conservatives and Wall Street. From the day he was announced as the new Pontiff, Pope Francis has been hailed as a “defender of the poor and a champion of social justice”.

In an article written today in the Catholic Online, author Deacon Keith Fournier claims that Rush Limbaugh is wrong and Karen Finney of MSNBC is nuts for their perception on Pope Francis’ comments relating to capitalism. Fournier writes, “The word capitalism does not even appear in the Apostolic Exhortation entitled The Joy of the Gospel. In fact, there is nothing new in what Francis says about economics in this document at all”.

In the 84 page document, known as the Apostolic Exhortation, Pope Francis defines his platform and outlines top priorities for his papacy. Prior comments by the Pope has only focused on the declining state of the global economy, but the document does provide more insight into the belief system of Pope Francis. However, right-wing conservatives such as Rush Limbaugh are making claims that Pope Francis crossed the line by equating “unfettered capitalism” with “tyranny”.

“Pope Francis attacked unfettered capitalism as ‘a new tyranny’ and beseeched global leaders to fight poverty and growing inequality, in a document on Tuesday setting out a platform for his papacy and calling for a renewal of the Catholic Church. … In it, Francis went further than previous comments criticizing the global economic system, attacking the ‘idolatry of money.'” ~  Rush Limbaugh 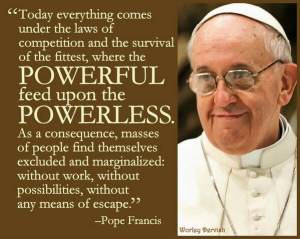 Pope Francis wrote, “How can it be that it is not a news item when an elderly homeless person dies of exposure, but it is news when the stock market loses two points?” He also went on to say, “Today everything comes under the laws of competition and the survival of the fittest, where the powerful feed upon the powerless”.

Pope Francis praised measures by global leaders to improve social welfare, health care, education, and communication, but he also reminds that the majority of people are still living from day to day in dire circumstances. Pope Francis drew from an analogy of the Ten Commandments stating, “Just as the commandment ‘Thou shalt not kill’ sets a clear limit in order to safeguard the value of human life, today we also have to say ‘thou shalt not’ to an economy of exclusion and inequality. Such an economy kills.”

Maybe the document does not include the word “capitalism’ in its word count, but this tidbit does not undermine the weight of his words and its reception by the people. In November, Archbishop Joseph Kurtz was elected as the leader of the United States Conference of Catholic Bishops (USCCB). According to his biography, Archbishop Kurtz received a Master’s degree in Social Work from the University of Maryland, and he has spent the bulk of his calling working with the Catholic Social Agency and Family Bureau.

In a statement released by Catholics in Alliance for the Common Good on Kurtz’s election states:

We thank God for the election of Archbishop Joseph Kurtz as the President of the United States Conference of Catholic Bishops. With his long pastoral experience, he’s a man who is clearly capable of moving the bishops’ conference forward in the vision laid out by Pope Francis. During this time of great excitement and fanfare for the universal Church, the bishops of the United States have a unique opportunity to renew the American Church as a place of welcome for all God’s children and as a tireless protector of God’s gifts in the public sphere, particularly as a defender of the poor and the marginalized. We look forward to journeying together with him in the years to come.

As an organization, we once again renew ourselves in our dedication to the Church. During his inaugural homily, Pope Francis asked all of us to work together to be protectors of God’s gifts. With Archbishop Kurtz, the bishops of the United States and the entire American Church, we plan to do just that.

The election of Archbishop Kurtz, who has diligently served in the area of social services, appears to be more inline with the vision and direction of Pope Francis’ manifesto. What is your thoughts? Do you feel the media has unfairly reported the intent of Pope Francis’ words?

Why Pharmacists Are at the Centre of Future Healthcare