byPatricia Fronek
in Global, Human Rights, News
0
ADVERTISEMENT
Share on FacebookShare on TwitterShare on LinkedinShare on PinterestShare via EmailShare on Reddit

The recent tragedy of the MH370 flight has triggered an unprecedented international search. The world’s thoughts are with the passengers and their relatives at such a dreadful time made harder by lack of answers. It is not my intention to take away from the legitimacy of the response to this tragedy, but it does raise questions about which humans are worthy of rescue. Certainly in Australia, it is not everyone. 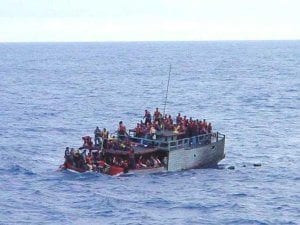 People who seek asylum in Australia have committed no crime, yet they are locked up in what can only be described as concentration camps, a step worse than prison, which includes men, women and children. Mind you. we detain Aboriginal people with disabilities without convictions in prison. People seeking asylum have no hope and with indefinite detention no future.

These are the same people who are desperate and fearful enough to risk their lives and that of their families to arrive by boat, and no one does this lightly. Privileged Australians, like our politicians, have little chance of understanding this kind of desperation. At least some people did arrive.

According to ABC Australia,

A spokesman for the Indonesian government has confirmed it is investigating reports Australia has begun turning asylum seeker boats back to Indonesian waters. Asylum seekers from two boats that washed up on islands on Indonesia’s far-east coast told the ABC earlier this month they were forced back by the Australian Navy. One boat was allegedly left without sufficient fuel and drifted for days. Read Full Article

We have let adults and children drown and have claimed we don’t have the resources to retrieve the bodies. The current government feels validated because we now tow back the boats or leave people on leaky ones. Yet, we routinely rescue sailors at sea and put a lot of resources into rescuing millionaires who find themselves in trouble. It is pretty clear to me who we deem worthy of rescue. Despite claims to the contrary, Australia does not take many refugees.

Rather than approaches that don’t work, alternatives such as facilitating rather than preventing relative reunions, increasing intake and creating improved, fair and transparent processing would respect human rights. Australia’s population is built on convicts, immigrants and displaced people. Many like the Vietnamese in the 1970s have arrived by boat and contributed economically, intellectually, and culturally. There is no reason why today’s refugees would not do the same provided we treat them with dignity and focused on inclusion.

Patricia Fronek, BSocWk; PhD; ACSW; is Senior Lecturer at Griffith University, School of Human Services and Social Work, Gold Coast Campus, Australia. She is the President of the Australian Association of Social Work and Welfare Education (AASWWE), and the host of www.podsocs.com.