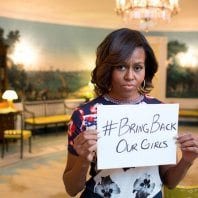 It is critically important that social workers remain at the forefront of preventing the abuse and exploitation of children and adults. The exploitation of humans both nationally and internationally must be brought to an end immediately. Recently, approximately 230 Nigerian girls were abducted from school by a militant group in hopes of selling the children as a form of human trafficking.

According to the Guardian,

After Nigerian protestors marched on parliament in the capital Abuja calling for action on April 30, people in cities around the world have followed suit and organised their own marches.

A social media campaign under the hashtag #Bringbackourgirls started trending in Nigeria two weeks ago and has now been tweeted more than one million times. It was first used on April 23 at the opening ceremony for a UNESCO event honouring the Nigerian city of Port Harcourt as the 2014 World Book Capital City. A Nigerian lawyer in Abuja, Ibrahim M. Abdullahi, tweeted the call in a speech by Dr. Oby Ezekwesili, Vice President of the World Bank for Africa to “Bring Back the Girls!”  Read Full Article

Across our nation, it is estimated that since 1999, approximately 800,000 have been reported as missing. Children in our very own system are being preyed upon by sex traffickers. The Congressional Research Institute for Social Work and Policy (CRISP) will continue to work in partnership with governmental organizations and agencies and Congress to protect children and families in the United States and on a global basis.We must continue to monitor and support legislation introduced by Rep. Karen Bass (CA-37) – H.R. 1732 Strengthening the Child Welfare Response to Human Trafficking Act, and Rep. Joyce Beatty (OH-3) – H.R. 3905

We must continue to monitor and support legislation introduced by Rep. Karen Bass (CA-37) – H.R. 1732Strengthening the Child Welfare Response to Human Trafficking Act,  and Rep. Joyce Beatty (OH-3) – H.R. 3905Improving the Response to Missing Children and Victims of Child Sex Trafficking Bill. In addition, let’s continue to linking up with fellow social workers around the world to combat human trafficking through various Departments of Social Services,CNN’s Freedom Project, and organizations such as Half the SkySave the Children, and the National Center for Missing and Exploited Children. Social workers are fighters for social justice. Let’s continue to ring the alarm and end human trafficking.

Dr. Angela S. Henderson is the Executive Director and one of the founding members of the Congressional Research Institute for Social Work and Policy. Dr. Henderson is responsible for CRISP’s public policy, research, education, and strategic planning initiatives. As a congressional fellow in the office of Rep. Edolphus “Ed” Towns, she was instrumental in developing Web applications and social media for the Congressional Social Work Caucus and supervised staff and interns on various projects. View all posts by Angela Henderson