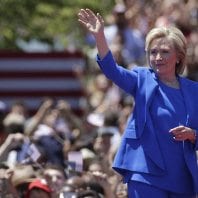 Saturday’s rally in Freedom Park on New York City’s Roosevelt Island provided Hillary Clinton with an opportunity to present ideas about what she will do to boost opportunity for prosperity for the poor and middle class. She spoke of four fights she will wage as President—getting the economy working for everyone, strengthening families, defending the country, and restoring integrity to the democratic process.

She vowed to support a constitutional amendment to undo the Supreme Court’s Citizens United decision that allows unlimited money in the electoral process. She defined herself as a fighter who has been knocked down but not knocked out. She received criticism early in her public career beginning with the 1993 healthcare fiasco early in her husband’s presidency and the wasteful Whitewater investigation led by Ken Starr that cost taxpayers nearly $60 million. She is now embroiled in an investigation of her handling of email while Secretary of State.

The relentless attacks on Hillary Clinton’s character have taken its toll. There are many who literally despise her. She has admittedly made mistakes but has not been found guilty of any criminal wrongdoing. The voices that are loudest and heard the most are the haters. They wish she would go away. Take the money and run.

At 67 years old, why would she want to take on a Republican-led Congress? What is there to gain? She’s had the White House experience. She says she is seeking the Presidency because of her lifelong commitment to children and those less fortunate. There are millions of Americans who believe in Hillary Clinton and look to her for leadership and she will not abandon them.

Secretary Clinton is taking heat because of the millions she and Bill Clinton have amassed through their Clinton Global Foundation. There is nothing wrong with becoming rich in America as long as most people have a reasonable chance at success and you are not trying to destroy those chances by undermining unions and depressing wages.

Yet, both she and Bill missed opportunities to be magnanimous with their largesse instead of piling up huge sums of money for their personal use. Allegedly charging nonprofits huge fees for speeches seems a bit over the top. She needs to address this issue because it will not go away and while it may not prevent her from reaching the White House it puts a damper on her public support.

Should she be elected President—and the odds are truly in her favor because of the demographic makeup of the electorate during Presidential elections—she will have no magic wand that will bring about the sweeping changes she is proposing with her policy agenda. She will need an active and vibrant citizenry working with her and the Democratic Party to rebalance our political and economic systems to expand opportunities for prosperity.

She will need every supporter she can muster. Social workers should not just be part of the effort social workers should be leaders in the pursuit of a more egalitarian society. That means helping to register new voters, empowering individuals and communities to become more involved, getting people to vote, and running for elected office. Changing the system often requires changing people in the system.

Democrats have a nine point advantage over Republicans among Americans who identify with either party, 48 percent to 39 percent. Yet Republicans were able to win control over the Senate and control 31 state governorships. They are also in control of the State Senate in 35 states and the State House in 33 states. Republicans won 52 percent of the votes for the House of Representatives in 2014 but gained 57 percent of the seats. Hillary Clinton has pledged to rebuild state Democratic parties that were largely abandoned during the Obama presidency.

The next President of the United States may be in the position to nominate four Supreme Court justices over the course of two terms. That alone should motivate progressives not to sit idly on the sidelines but to be actively organizing and working to get more like-minded people to register and vote. It would be wonderful if Secretary Clinton was flawless but it’s enough for me to know that she wants to improve circumstances for the poor and middle class. I have no reason not to believe her other than the words of those who would like to see her fail.