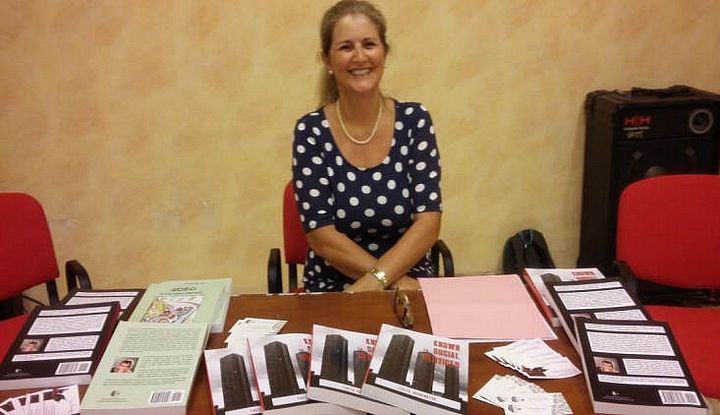 Freya Barrington, a highly commended Social Worker, is the author of the international bestseller Known to Social Services. This powerful and unflinching book follows the fictional Social Worker Diane, and the characters she meets during her work at the barren, underprivileged Deacon Hill estate. Known to Social Services offers a glimpse into the world of social work from the unique perspective of the social worker herself.

In an interview with Social Work Helper, Freya was animated and keen to share her reasons for writing the book. “I wanted to raise the profile of Social Workers,” she explained. “This is a hard job that people are doing… The main reason for the book was to highlight what it’s really like”. Indeed, Known to Social Services includes a range of challenging situations, including such harrowing topics as incest, rape, domestic violence, female genital mutilation, and child abuse. It is no surprise that Freya wanted to champion her profession.

Freya spoke about her own career, which, somewhat unusually, began with working with horses in a racing yard. After around 20 years of equine-related work, Freya felt ready for something new and through a friend obtained employment in schools focusing on children with emotional and behavioral issues.

From her subsequent encounters with Social Workers whilst working in schools, Freya realised that she wanted to take up the mantle herself. When asked about this, Freya said that she had “great ideals of saving the world and helping children”, and describes her idea of Social Workers as fundamentally being able to help others: “They are carers, caring people”. After an impressive career as a Social Worker, Freya became a full-time foster carer and wrote her first book.

Known to Social Services, primarily, brings across the chaos of the Social Worker’s world. The narrative of the main character Diane is frequently interrupted with chunks of other people’s lives – from other professionals, to strangers on the street, to the families on her caseload.

“I did this to bring across the effect of how it really is”, Freya explained, “Because you don’t just deal with one family in a block, you might deal with 6 families in a day. And, if something serious happens, you might have to reschedule everything you’d already planned”. In discussion, Freya made it clear that social work requires creativity, hardiness, quick thinking and constant re-prioritisation. Reminders and diaries, she assured are essential!

This led to the question: given the many demands of being a Social Worker, what helps to prevent burnout? Freya spoke about a time that she personally experienced burnout, just 9 months into her first job. She feels that theoretical university education had not adequately prepared her for “suddenly dealing with real people”. This, coupled with a huge and complex workload, could lead in only one direction. Freya sensibly took time off work to recover, and to reflect upon how she had reached burnout.

Freya talked extensively about how crucial it is to separate one’s home and work life, however difficult this may be. “When it’s time to go home, though obviously you still have concerns for the children on your caseload, you have to accept that it cannot be your responsibility 24/7 and that there are other people in the out of hours team to deal with any ongoing crisis.” This tension – between caring and wanting to give everything to the job is a constant theme in Known to Social Services. Currently UK universities now include Known to Social Services on their reading list to help give insight on the pressures of social work to students.

“You’re not superwoman!”, Freya laughed, referring to both her main character and herself. She also spoke about her personal fondness for ‘winding down’ with animals, nature, and being with her friends. Self-care is one of the cornerstones of being an effective Social Worker. Freya noted that her supportive partner was an added bonus, and has written elsewhere about some of their journeys together.

Whilst at work, Freya recommends that Social Workers “Take hope from the positive outcomes”. Such positive outcomes are all too often missed, especially by the media, which will often criticise or vilify Social Workers, while encouraging the “child-snatcher” myth. This, of course, affects staff morale. Freya believes that supportive and understanding management is essential in helping a Social Worker negotiate workloads, manage expectations, and engage in proper self-care in a system that pushes Social workers to overwork.

However, Freya believes in the power of  social media, blogs and article writing, and their usefulness as a tool to share the life of a Social Worker because they can get the message out quickly when needed while helping to foster relationships with the public. Freya’s blog offers insight into her life and writing as well as her current projects.

When asked, at the conclusion of the interview, what tip she could give to fellow Social Workers, Freya had a range of ideas. She acknowledges that it is important to be firm, even with hardworking and busy managers, when the workload gets too much. “Don’t be afraid to say no, and know your limitations. It’s okay to say, ‘No, I have too much work to do and if you give me one more case, the other cases will suffer as a result’.

“You’ve got to know yourself. You’ve got to find the inner strength to deal with everything that faces you – appropriately, and in a balanced way”. Freya’s latest book, Caught in Traffick continues to follow her fictional Social Worker, Diane. Whilst coy about the content, Freya told us that it took about six months to write, centres on child trafficking, and contains some of the characters from Known to Social Services in its ranks. Caught in Traffick is due to be published in August 2016.