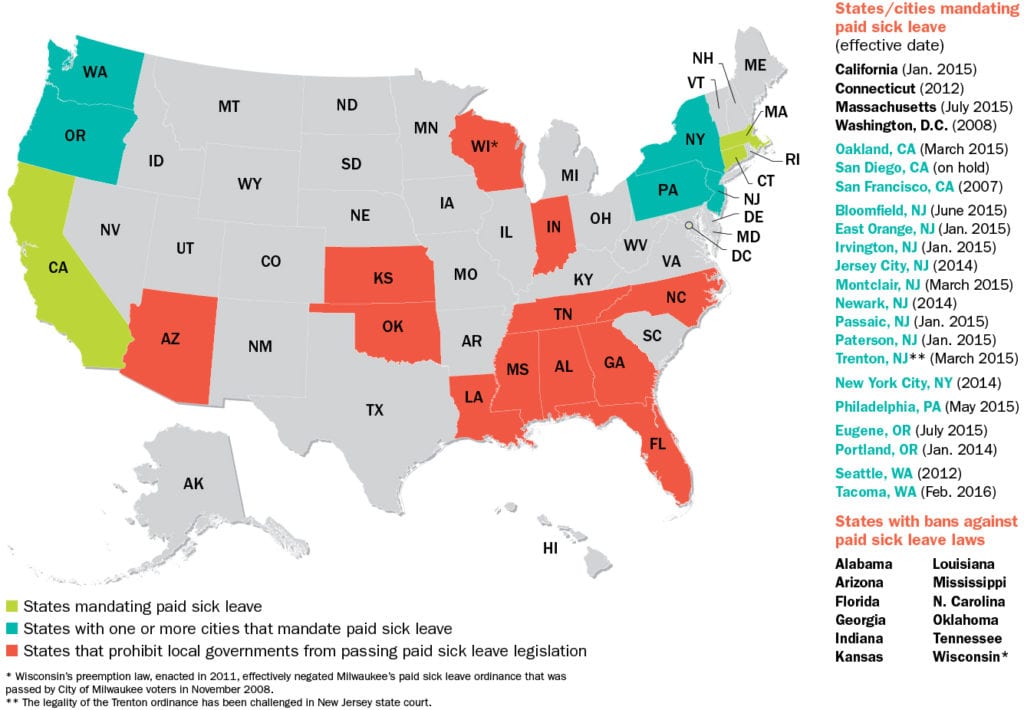 Researchers from Florida Atlantic University and Cleveland State University are the first to explore the link between psychological distress and paid sick leave among U.S. workers ages 18-64. Results of their study, published in the American Journal of Orthopsychiatry, illuminate the effects of exacerbated stress on Americans without paid sick leave who are unable to care for themselves or their loved ones without fear of losing wages or their jobs.

The researchers found that workers without paid sick leave benefits reported a statistically significant higher level of psychological distress. They also are 1.45 times more likely to report that their distress symptoms interfere “a lot” with their daily life and activities compared to workers with paid sick leave. Those most vulnerable: young, Hispanic, low-income and poorly educated populations.

“Given the disproportionate access to paid sick leave based on race, ethnicity and income status, coupled with its relationship to health and mental health, paid sick leave must be viewed as a health disparity as well as a social justice issue,” said LeaAnne DeRigne, Ph.D., co-author of the study and an associate professor in the Phyllis and Harvey Sandler School of Social Work within FAU’s College for Design and Social Inquiry. “Even modest increases in psychological distress are noteworthy for both researchers and policy makers since we know that even small increases in stress can impact health.”

The study included 17,897 respondents from the National Health Interview Survey(NHIS), administered by the U.S. government since 1957 to examine a nationally representative sample of U.S. households about health and sociodemographic variables.

“For many Americans, daily life itself can be a source of stress as they struggle to manage numerous responsibilities including health related issues,” said Patricia Stoddard-Dare, Ph.D., lead author of the study and associate professor of social work at Cleveland State University. “Making matters worse, for those who lack paid sick leave, a day away from work can mean lost wages or even fear of losing one’s job. These stressors combined with other sources of stress have the potential to interfere with workplace performance and impact overall mental health.”

The researchers used the Kessler Psychological Distress Scale (K6), considered the gold standard for assessing psychological distress in population-based samples in the U.S. and internationally. With a theoretical range of 0 to 24, higher scores on the K6 represent increased psychological distress and scores above 13 are correlated with having a mental disorder of some type.

The most significant control variables indicated an increase in the expected psychological distress score among those who were younger, female, in fair or poor personal health, had at least one chronic health condition, were current smokers or did not average the recommended range of seven to nine hours of sleep per day.

Approximately 40 percent of respondents in the NHIS sample did not have paid sick leave; approximately half of the respondents were female; more than half were married or cohabitating; three-quarters indicated that their highest level of education included at least some college; and 62 percent were non-Hispanic white. The mean age was 41.2 years. Most of the respondents (79.1 percent) worked full-time and 82.7 percent had health insurance coverage. Respondents were in families with a mean size of 2.6 persons and 39.3 percent reported having children in the family. Approximately 32 percent had an annual family income of $35,000 to $50,000, and more than one quarter were below the poverty threshold.

DeRigne and Stoddard-Dare caution that even though there is concern about the potential burden on employers if paid sick leave laws are passed, it is important to be mindful of the overall situation regarding productivity loss and workplace costs associated with mental health symptoms and psychological concerns among U.S. workers. Furthermore, the personal health care consequences of delaying or forgoing needed medical care can lead to more complicated and expensive health conditions. U.S. workers with paid sick leave are more likely to take time off work and self-quarantine when necessary, without the worries of losing their job or income while also not spreading illness to others.

“Results from our research will help employers as they think about strategies to reduce psychological stress in their employees such as implementing or expanding access to paid sick days,” said Stoddard-Dare. “Clinicians also can use these findings to help their patients and clients as can legislators who are actively evaluating the value of mandating paid sick leave.”