byDeona Hooper, MSW
in LGBTQ, News, Politics
0
ADVERTISEMENT
Share on FacebookShare on TwitterShare on LinkedinShare on PinterestShare via EmailShare on Reddit 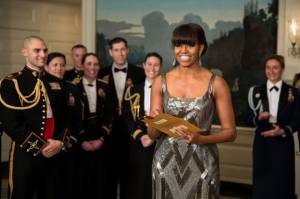 First Lady, Michelle Obama with some assistance from Jack Nicholas announced the winner for Best Picture at the Academy Awards 2013. At the end of all the suspense, Argo directed by Ben Affleck snagged the Academy’s top award after not being nominated for Best Director. Although this was a major upset with Lincoln being the favorite to win, this Oscar moment triggered lots of angry tweets by right wingers at Michelle Obama’s Oscar appearance.

The New Civil Rights Movement was one of the first to report on this massive upset, and they also took the initiative to create a storify archive of all the tweets. Here is an except from their article:

“It’s through cinema,” Mrs. Obama added, that “our children learn to open their imagination and dream just a little bigger and to strive every day to reach those dreams.”

But the First Lady also delivered a shout-out to the LGBT community, concluding, “These lessons apply to all of us no matter who we are or what we look like or where we come from or who we love.”

Can POTUS and FLOTUS just relocate the White House to Hollywood and be done with it? #oscars2013