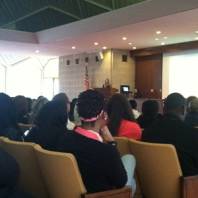 On March 20, 2013, the National Association of Social Workers-North Carolina Chapter (NASW-NC) held its Lobby Day 2013, which always occur on odd number years, at the North Carolina General Assembly. The purpose of Lobby Day is to expose practicing social workers and students to the legislative process and teach them how to advocate for legislation and policies that influence social work practice.

The entire day was focused on macro social work (community practice), advocating for policies in adherence to the social work code of ethics, and being informed on current issues in front of our elected officials that will overwhelming affect the vulnerable populations that we serve. There was one stand-out school in attendance that made their presence known.

Livingstone College in Salisbury, North Carolina, approximately 30 minutes from Charlotte, showed up at Lobby Day 2013 with the largest social work group at the General Assembly despite having one of the smaller programs in the state.

I had the opportunity to talk with several of their students after the session to hear their thoughts and impressions on Lobby Day.

They are pictured in the photo on the right with their Lobby Day Certificates of Attendance from the NASW-NC. They were also aware that Livingstone College was the largest social work group in attendance, and they gave credit to their teachers Ms. Kathy Riek and Dr. Walter Ellis.

Many of them plan to pursue their Masters in Social Work, and they are considering programs such as Clark Atlanta University, University of North Carolina at Charlotte (UNCC), and UNC Greensboro.

It was refreshing to see young social workers at the beginning of their careers who were eager and willing to make the connection between legislative policy and social work practice.

Pictured on the left is NASW-NC Board President Jessica Holton along with Kay Paksoy, BSW  (Director of Advocacy, Policy and Legislation) and  Valerie Arendt, MSW, MPP  (Director of Membership Marketing & Communication).

Kay helped set the tone for the day by relaying to everyone the valuable information they would need on how to approach and talk to legislators.

She also provided an in-depth explanation on the three key pieces of legislation that NASW-NC has thrown its support behind which are Voter Protection Integrity, Prevention of Mandatory Co-Pays for Vulnerable Populations, and Exemption for Children in Foster Care from Corporal Punishment in Schools. You can view her presentation later in the article.

Also, I had the opportunity to talk with Kathy Boyd, NASW-NC Executive Director as well as several other board members such as Jack Register and Jamillah Bynum. They all expressed their excitement about the turn out of social workers, social work professors, and students from around the state. Kathy talked about several initiatives in process such as the rebooting of a policy program started in the late 90’s to connect policy professors and their students throughout the state.

Also, Kathy is spear heading another project to produce a publication of social workers working as Policy Analyst, Lobbyist, or have been elected to public office which is due to be released soon. For more information on NASW-NC activities, you can visit them on their website at http://www.naswnc.org.