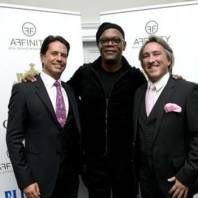 Former social worker and Django Unchained actor, Samuel L. Jackson, has announced that he will be hosting for five years running the Fifth Annual Shooting Stars Gala 2013 with this year’s donations benefiting the Alzheimer’s Association. Mr. Jackson’s decision to continue hosting the event each year in its five year existence shows his commitment to lending his celebrity to promoting worthy causes. The Samuel L. Jackson Foundation is responsible for organizing the event in order to raise donations for various worthy causes.

This year’s event is especially important to Mr. Jackson due to the tragic loss of his mother in 2012 after a long battle with the disease. The goal of the Samuel L. Jackson Foundation is to raise money that will be put towards research for Dementia and Alzheimer’s. Mr. Jackson makes a passionate plea to help him raise donations and awareness for the Alzheimer’s Association.

There are only 12 days left to make a donation before the event, and Mr. Jackson is asking for donations of $3.00 or more. Let’s show this fellow social worker turned celebrity that we got his back on this, and you can make a donation using this link.  I guess that I should mention that a $3 dollar donation will also enter you to win tickets and a plane trip to the UK to attend the event. For more information on the shooting stars event, you can visit http://www.shootingstarsbenefit.com

Affinity Real Estate was chosen to be the event’s primary sponsor, and it will be held on June 14th and 15th at The Grove luxury resort in London, United Kingdom. The Shooting Star’s event is a charity golf tournament packed with other compassionate celebrities willing to lend their personas to help raise awareness for important causes. Here is an excerpt from the Alzheimer’s Association website to help you become familiar with the good work they do in fighting this incurable disease:

The Association is the leading voice for Alzheimer’s disease advocacy, fighting for critical Alzheimer’s research, prevention and care initiatives at the state and federal level.  We diligently work to make Alzheimer’s a national priority.  Join our effort.