byLydia Long
in Human Rights, Local, News, Politics, Poverty
0
ADVERTISEMENT
Share on FacebookShare on TwitterShare on LinkedinShare on PinterestShare via EmailShare on Reddit

On June 3, 2013, more than 150 people were arrested at the North Carolina’s State Legislature on what has been deemed “Moral Mondays”. Citizens from around the country has been flocking to the state’s capital for protest rallies on the radical legislation being passed that overwhelming affect vulnerable populations while at the same time increasing tax benefits for the state’s richest families. Moral Monday arrest total is now over 300 people being arrested from peaceful protest. 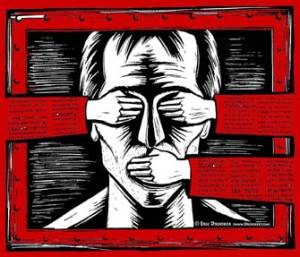 Nancie Carmody once said the complaining she hears about our government gives her comfort because it’s a sign we have freedom of speech.  What does this mean when our government begins to censor our opinions?  Are dissenting opinions not important? Will North Carolina continue to arrest people who don’t agree with them who are exercising their first amendment rights of free speech and assembly?

I was reading some posts online about the ongoing political movement in North Carolina where citizens are protesting the radial legislation by the Republican led legislature.

As I came to Senator Jerry Tillman’s Facebook page, I began reading many of what I felt to be misconceptions about the consequences of the current legislation on our state which was pointed out politely so in the comments section.  I checked back later to realize that my comments had been deleted and I was unable to comment again. This reflects perfectly the current Republican Party’s attitude to our most vulnerable populations.

Senator Tillman happens to also be in my district. His dismissal of my comments gives me  perspective on his character and bleak hope for our future.  I fear for my state, and the direction it is going. I fear for my state because political leaders make decisions without looking for feedback or  assessing the wellbeing of their community.

I fear for my state because we seem to be moving toward a system of totalitarianism where a political system holds authority over society.  I believe all people have the right to food, health, safety and their pursuit of happiness.  Our current legislature is taking these necessities from our most vulnerable populations in order to benefit the most wealthy estates and families.

It is our civic obligation and responsibility to fight against unjust laws.  It is also our civic obligation to abolish governments that do not benefit us as a whole. I will not be silent in the face of this current injustice, and I will speak out.  If society can change one oppressive policies in the past, then great change is possible again. For the sake of our state, I hope for this change.