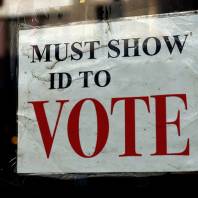 The North Carolina General Assemby recently passed a new set of voting rules that will disenfranchise an estimated 319,000 North Carolina voters, 30% of whom are African American. North Carolina voter id bill is gaining national attention because it will be the most restrictive voter id laws passed by any state in the country. SCSJ will fight to the end to ensure that every eligible voter is able to exercise their fundamental right. Here is the story of just one of the voters who effectively lost their right to vote thanks to the new Voter ID bill.

Alberta Currie is the Great-Granddaughter of slaves. Mrs. Currie, her parents, and her children all worked picking cotton and tobacco in the fields of Robeson County NC. She is the mother of seven, 78 years old, and does not have a birth certificate because she was born at home. She has voted consistently since she first became eligible to vote in 1956. She does not have a photo ID and cannot obtain one in North Carolina without a birth certificate.

When Mrs. Currie first went to vote in 1956, election officials made black voters wait until whites had voted while keeping them standing at the back of the line. In 2012, she and her daughters stood in line to be the first ones to vote on the date that early voting opened. When it was her turn, local election officials told her that she better not come back to vote unless she gets a picture id. She and her family consider it a matter of personal dignity to be able to go in person and vote. It is one thing that lets them say to the world that they are equal to everyone else.

Her is an excerpt of Alberta’s interview with CBS News;

But the North Carolina bill, entitled the Voter Information Verification Act (VIVA), goes much further. It rolls back the increasingly popular early voting period from 17 days to 10 days, even though 61 percent of ballots in 2012 were cast before election day. The bill outlaws early voting on Sunday, which is particularly popular with predominantly black churches bussing “souls to the polls.”

In 2012 in North Carolina, Democrats cast 47 percent of the early votes, and Republicans cast 32 percent, according to a CBS News analysis.

The North Carolina bill repeals same-day registration, which allowed 100,000 North Carolinians to register and vote early in one stop in 2008 and again in 2012. In last year’s general election, about 1,300 of those same day registrants, or one-and-a-half percent, could not be verified after the votes were counted, according to the State Board of Elections. Read Full Article

On July 25, 2013, the North Carolina General Assembly passed harsh new rules that will prevent hundreds of thousands of North Carolinians like Alberta from voting.

Here are some of the ways the new law will affect all NC voters:

What you can do:

Shoshannah Sayers is the Deputy Director at the Southern Coalition for Social Justice. Graduating from UNC Chapel Hill School of Law in 2004, Shoshannah immediately went into civil rights work as a Post-Doctoral Scholar at the UNC Center for Civil Rights, where she worked on public education reform and voting rights matters. She then spent a year at the Center for Community Action in Lumberton, North Carolina, doing community organizing and policy analysis for the grassroots nonprofit. View all posts by Shoshannah Sayers