byLogan Keziah
in Entertainment, LGBTQ, News
0
ADVERTISEMENT
Share on FacebookShare on TwitterShare on LinkedinShare on PinterestShare via EmailShare on Reddit

Last fall, LGBTQ individuals and allies found solace and strength when Macklemore and Ryan Lewis released “Same Love,” The fourth single off of their album “The Heist,” featuring Seattle based singer/songwriter Mary Lambert. The song was recorded during the campaign for Washington Referendum 74, the ballot measure that legalized gay marriage in the state of Washington. “Same Love” became an anthem for gay rights activists across the country, a rallying cry for legalization and recognition of same sex marriages. The single topped out at number #11 on the Billboard top 100 charts but reached #1 in Australia and New Zealand.

Mary Lambert co-wrote the song and composed the hit’s hook chorus in less than 2 hours. Mary Lambert a self-taught pianist from age 6, pulled her inspiration for the song from her personal experiences. 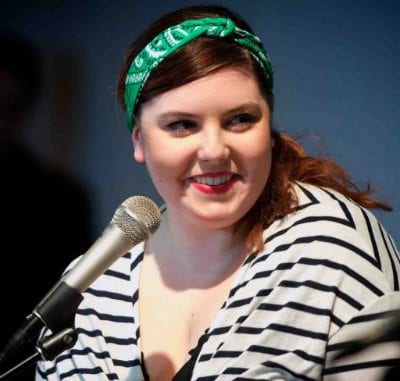 Lambert was raised Pentecostal, and saw firsthand the prejudices many within the church have against the gay community when her mom came out as a lesbian.  “My mom started dating women when I was six,” she said, “and the church ostracized us.”  Growing up in poverty, their forced severance from the church took not only a toll on their faith-based lives, but also on their finances.  “We were sort of a charity family, and so we lost all of that, and that connection to that community.” read full article

After the unprecedented success of “Same Love,” Mary embarked on a journey to expand on the story glimpsed in “Same love”. With the support of co-collaborators Macklemore and Ryan Lewis, she wrote and recorded a beautiful extension to the hit song, “She keeps me Warm.” The new song was released nationwide in July.

“Two years ago, I did an extensive YouTube search for a mainstream music video that depicted a lesbian relationship,” she says. “I was disappointed, shocked and a little hurt that I couldn’t find a single one. Sure, there were hot girls rolling around in lingerie, girls briefly holding hands, or something involving a man. Lesbians were used as shock value. This video came to fruition with an all-queer female crew who shared my vision. It was an incredible experience.” read full article

Mary Lambert will be performing along with her co-collaborators, the nationwide hit, “same love,” at the Video Music Awards this coming Sunday Night. The VMA’s will broadcast live on MTV on August 25th at 9pm/8pm Central. Follow the link below to view the exclusive premiere on the Billboard Music website, before its wide release at noon on August 25th.

CSWE Film Festival Series: A Film Short on Depression Entitled "Got You" by Bianca Morris