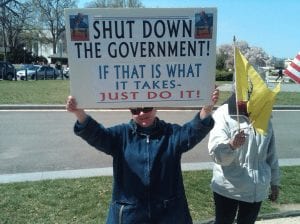 It is shortly after midnight, and a government shutdown is now reality. Republicans have refused to pass a budget or continuing resolution unless Democrats agree to defund or further limit Obamacare which has led to the first government shutdown in 17 years. It appears Texas Senator, Ted Cruz, is leading tea party Republicans in their disdain for Obamacare. However, their efforts have done nothing to prevent full implementation of the Affordable Care Act which also went into effect at 12:01AM.

You can read the full text of the President’s speech below:

Hi everybody. As President and your Commander in Chief, I’ve worked to make sure you have the strategy, the resources and the support you need to complete the missions our nation asks of you. Every time, you’ve met your responsibilities and performed with extraordinary professionalism, skill and courage. Unfortunately, Congress has not fulfilled its responsibility. It has failed to pass a budget and, as a result, much of our government must now shut down until Congress funds it again. Secretary Hagel, General Dempsey and your commanders will have more information about how this affects you and your families. Today, I want to speak directly to you about what happens next. Those of you in uniform will remain on your normal duty status. The threats to our national security have not changed, and we need you to be ready for any contingency. Ongoing military operations—like our efforts in Afghanistan—will continue. If you’re serving in harm’s way, we’re going to make sure you have what you need to succeed in your missions. Congress has passed, and I am signing into law, legislation to make sure you get your paychecks on time. And we’ll continue working to address any impact this shutdown has on you and your families.

To all our DOD civilians—I know the days ahead could mean more uncertainty, including possible furloughs. And I know this comes on top of the furloughs that many of you already endured this summer. You and your families deserve better than the dysfunction we’re seeing in Congress. Your talents and dedication help keep our military the best in the world. That’s why I’ll keep working to get Congress to reopen our government and get you back to work as soon as possible.

Finally, I know this shutdown occurs against the background of broader changes. The war in Iraq is over. The war in Afghanistan will end next year. After more than a decade of unprecedented operations, we are moving off a war footing. Yes, our military will be leaner, and as a nation we face difficult budget choices going forward.

But here’s what I want you to know. I’m going to keep fighting to get rid of those across-the-board budget cuts—the sequester—which are hurting our military and our economy. We need a responsible approach that deals with our fiscal challenges and keeps our military and our economy strong. And I’m going to make sure you stay the greatest military in the world—bar none. That’s what I’m fighting for. That’s what you and your families deserve.

The “Invisible Man” Made Visible