byDeona Hooper, MSW
in Politics, Poverty
0
ADVERTISEMENT
Share on FacebookShare on TwitterShare on LinkedinShare on PinterestShare via EmailShare on Reddit 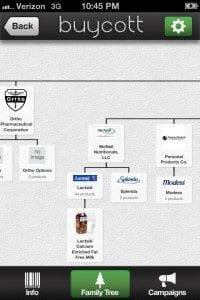 Did you know buying Dixie cups, Angel Soft toilet tissue, or Brawny paper towels were part of the Koch Brothers empire? Neither did I, until a nifty mobile app called Buycott was created, and it is currently available for download in Google Play and iTunes

In North Carolina, Billionaire Art Pope owns Maxway and Roses among others, and he does not allow any of his stores to be constructed unless they are in neighborhoods that are two-thirds minority. Then, he uses those profits to advocate for policies against the poor and minorities. The buycott app and future similar inventions could create a phenomenon that corporations are not used to. It could drive competition between corporations for consumer dollars if consumers decide to reward those that contributor to charity and punish those who use their profits to lobby for more oppressive polices.

According to Forbes Magazine,

Once you’ve scanned an item, Buycott will show you its corporate family tree on your phone screen. Scan a box of Splenda sweetener, for instance, and you’ll see its parent, McNeil Nutritionals, is a subsidiary of Johnson & Johnson.

To watch Forbes test drive the app in a supermarket aisle, click here.

Even more impressively, you can join user-created campaigns to boycott business practices that violate your principles rather than single companies. One of these campaigns, Demand GMO Labeling, will scan your box of cereal and tell you if it was made by one of the 36 corporations that donated more than $150,000 to oppose the mandatory labeling of genetically modified food.

Deciding to add that campaign to your Buycott app might make buying your breakfast nearly impossible, as that list includes not just headline grabbers like agricultural giant Monsanto but just about every big consumer company with a presence in the supermarket aisle: Coca-Cola, Nestle, Kraft, Heinz, Kellogg’s, Unilever and more. Read Full Article

View the Video Below to See How it Works:

What If Walter White on Breaking Bad Had Obamacare