byJeuron Dove
in Entertainment, News, Social Good
0
ADVERTISEMENT
Share on FacebookShare on TwitterShare on LinkedinShare on PinterestShare via EmailShare on Reddit 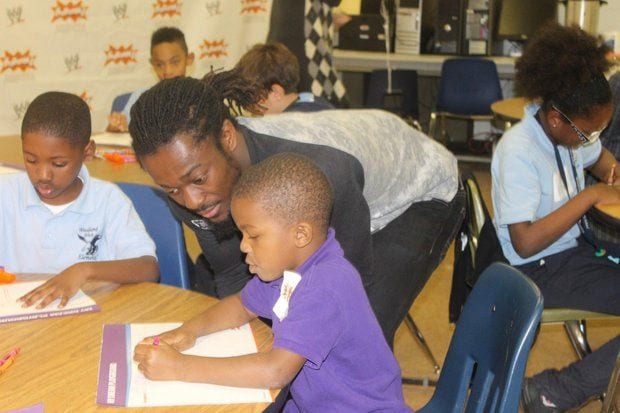 Whether it be on the playground during recess or after school at a community park, children cherish their recreation time. Unfortunately, there are several neighborhoods and schools across this country where such facilities do not exist due to a lack of resources. However, WWE  has partnered with KaBOOM! to build a new playground at Woodland West Elementary School in Harvey, La.

KaBOOM! is a national non-profit organization dedicated to ensuring all children get the proper balance of active play they need to become healthy and successful young adults. Founder and CEO Darell Hammond was inspired to begin the organization after reading a 1995 Washington Post article about two local children who suffocated while playing in an abandoned car.

In his mind, the tragedy could have been avoided if only the children had a safe environment to play in. Since its inception in 1996, KaBOOM! has raised more than $200 million and led in the hands-on construction of over 2,000 playgrounds.

“We are honored to partner with WWE to help give the children of this community the childhood they deserve with this play space,” said Hammond. To kick off the project, WWE Superstar Kofi Kingston hosted a Design Day at Woodland Elementary, where the children were able to brainstorm and design various ideas for their dream playground.

The children will have their final design come to life during WrestleMania Week on Friday, April 4 when WWE Superstars, employees, and community volunteers will spend the day constructing the playground from scratch. Kingston, a 4x Intercontinental Champion, spoke at length to the children about how his adventures on the playground as a child played a significant role in fulfilling his lifelong dream of becoming a professional wrestler.

“Practice, dedication, and wanting to succeed; it all starts at the playground,”  he said. The playground build serves as part of WWE’s week-long lineup of community outreach activities leading up to WrestleMania 30 on Sunday, April 6 at the Mercedes-Benz Superdome in New Orleans.

WWE is utilizing all its assets, including TV, live events, PSA’s, in-arena, digital and social media to generate awareness of the playground build and partnership, and the initiative ties directly into First Lady Michelle Obama’s Let’s Move campaign

Since her husband, President Barack Obama, took office in 2009, Michelle has embarked on a comprehensive mission to bring awareness to the health of America’s children.  In addition to healthier eating habits, she cites a lack of physical activity as a major contributing factor to childhood obesity. It is recommended that children participate in at least one hour of moderate to vigorous physical activity on a daily basis.

Recent studies have also shown a correlation between physical activity and academic performance. A 2013 report from the Institute of Medicine states that children who are more active show greater attention, have faster cognitive processing speed, and perform better on standardized academic tests than children who are less active.