byDeona Hooper, MSW
in News, Politics, Social Work
0
ADVERTISEMENT
Share on FacebookShare on TwitterShare on LinkedinShare on PinterestShare via EmailShare on Reddit

How does conservatism factor into social work policy and practice? Justin Nutt, a conservative staff writer for Social Justice Solution, wrote an article entitled “Social Worker Doesn’t Mean Liberal”. When I started Social Work Helper a couple of years ago, I made a conscious decision that I would use this platform to challenge conservative and right-wing fallacies that often cause people living in the margins to vote against their own interest. 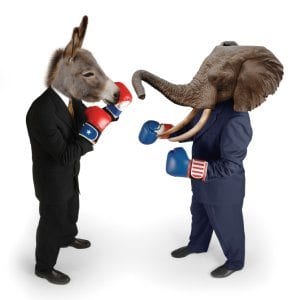 I was often told that it was inappropriate for a social worker to discuss politics or party affiliation in the scope of social work practice.  However, I was born, raised, and have lived my entire life in the Jim Crow South, and my almost 40 years of living on this earth tells me that our belief systems is the filter in which we process information and determines how we interact with the world.

Especially in the South, I believe it’s extremely naive to believe that a person’s belief systems does not influence their decision-making in practice. No social worker is immune from having prejudices, but it is when we lack the ability to acknowledge our deficiencies that those we serve suffer.

I have personally been affected by the racial animus of the Christian conservative right were their barbaric hatred allowed them to feel entitled to kill African-Americans at will.

My great-grandfather was killed by the Ku Klux Klan, and it happened approximately four miles from my parents’ current home where there is a street the locals refer to as Nigger Head Road. This is where they would hang black people who got out of line. My parents grew up in a segregated South, and America is not as far removed from the oppressive beliefs, policies, and politics that has perpetuated this stain on America’s history as many want to believe.

On social issues which consist of any public policy issue affecting individuals and/or society at large, I identify as a liberal. I made the decision long ago to advocate on behalf of vulnerable populations, and I believe democratic values happen to align more closely with those beliefs and principles.

When it comes to government spending, I would say my beliefs align as a fiscal conservative. If the government wants to eliminate loop holes to reduce fraud and abuse in governmental programs, I believe the other side of the equation should include elimination of tax loop holes to prevent tax avoidance by the 1 percent. I believe way to much is focused on the small percentage of federal dollars funding governmental assistance programs versus the lack of outrage for the tax-free status of the NFL while tax dollars are being used to build stadiums.

But, when I hear Republicans talk, there is a familiar oppressive undertone that resonates which appears to be reflective of their value system. As social workers, our primary purpose is to serve the oppressed, vulnerable, addicted, and marginalized. However, It causes me great concern when helping professionals in positions of power to make policy, determinations of benefits, eligibility of services, prevention programs, and treatment hold the conservative values articulated in Mr. Nutt’s article.

A relatively new social worker, named Amanda, wrote a response to Mr. Nutt’s article in the comments section that I wanted to share with you. She went point by point to address various statements within his article from her point of view, and here is her comment in full:

As a relatively new/young social worker who looks to experienced social workers as leaders in this profession, I must admit I am disheartened by this article.

My critique is not a slight to you personally, Mr. Nutt. I wholeheartedly support your right to form your own opinions. However, I am concerned that appearing within the context of this website frames these opinions as “social justice.” Furthermore, it suggests that stereotypical descriptions of “Liberal” and “Conservative” are evaluative social justice frameworks when in fact, they are not.

In my personal life, I am neither Liberal nor Conservative. In my professional life, I am a social worker. And as such, I use a strengths based approach to my clients’ needs, data from both research and practice, and social justice frameworks to collaborate with clients to create, assess, implement, and evaluate policy. Strictly adhering to traditional political silos because of my own personal partisan identification is not an intervention I have or will ever use.

Furthermore, as this is a social justice site, I am confused as to how the following conclusions were made through the lens of social work values or social justice evaluative frameworks:

“insurance is a personal responsibility”

Many of our clients do not have access to employment that provides insurance and cannot afford their own plan. Wouldn’t social workers acknowledge that the systems that set the price and accessibility to insurance are *also* responsible for making it something everyone *can* actually obtain? Why take a personal-deficit approach to being uninsured? Where is the macro-level assessment of this issue?

Many undocumented immigrants come to the U.S. fleeing political violence and hostility, risking death to do so. A growing number of these immigrants are very young, unaccompanied children. I was taught that social workers are to globalize their community identification with other human beings, meaning that national borders do not determine whether or not someone is entitled to life, freedom, and human rights–and the services necessary to secure those things. In other words: social justice.

“damn right you need an ID to vote,”

In the state where I reside, the voter ID law stood to disenfranchise an estimated half-million citizens in favor of eliminating “illegal voting”–something no one could even agree as to whether it even existed or was statistically significant. How is this research-informed policy making?

“just because something negative about Obama is said doesn’t mean the person is a racist. Actually saying it is a race issue creates racism,”

Social work values demand cultural competence which includes acknowledging personal racial biases. The idea that racial bias is either “present or not” or that racism can be “created” is concerning to me because racism.is.present. The U.S. is NOT post-racial and racism permeates every corner of U.S. society. Many critiques made about Obama do in fact ooze with racist microaggressions.

“if you need a drug test to get a job then those receiving government assistance should be required to take them, too”

There is a difference between an at-will employee taking a drug test to maintain employment, and the government drug testing someone as a contingency to survival. What is the solution then if someone’s test comes back dirty? Do they and their children deserve to starve because they struggle with addiction? Will that make the addiction better? Is this “social justice?”

The state of Florida spends tens of thousands of dollars per month drug testing welfare recipients and 98% test clean. Not only is this a complete waste of money but it also perpetuates the stigma that lower income folks are presumed drug users. How is this strengths-based? How is this policy position research-informed? Furthermore, social work dictates that the community most affected by a policy help create the policy. Are welfare recipients OK with being drug tested and presumed as drug users?

“I also believe abortion is acceptable, but that the current way it is used is not always the best practice.”

I am not even sure I want to go here, especially if you’re implying that the “abortion is mostly used as birth control” stereotype has any place in policy making.

“If you want equality, it must be equal treatment across the board rather than one set of rules for the majority and a special set to keep the minority from feeling persecuted…..”

I am going to stop here, because I find this just incredibly disrespectful. I am a white, straight, cisgendered, coupled, married, educated, middle-class, able-bodied, free, family-supported, food/housing secure, Christian woman, and I am not about to sit here and cry big privileged tears that some (hardly enough) policies in this country give oppressed (“minority”) groups the opportunities that I automatically have as a person with unearned, unquestioned power and privilege.  ~Amanda Woolsten, BSW, MSW Candidate

I am interested to know what are your thoughts, and does our personal values matter or don’t matter in terms of how we practice social work? Do our personal belief systems affect how we develop and implement policy? I look forward to having this debate with you.