Recently, I went to the #fostercare hash-tag on Instagram to look at the most current foster-care related photos. At the top of the list of images, I saw a very inappropriate nude photo of an attractive young woman. Initially, I was very frustrated that someone would post nude photos in the #fostercare hashtag in which I use to inspire foster care youth and advocates.

Then, I read what she posted and noticed the other hash tags she used: # orphan, # liar, and # molestation. This girl was molested most of her younger years and is deeply scarred. Posting nude photos appears to be her way of expressing and fighting back. 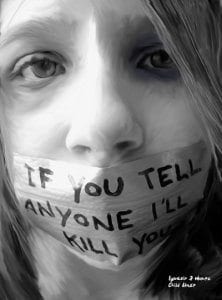 It is understandable she is trying to take control of what was taken from her for many years, and I can’t really blame her for no longer wanting to be silenced. However, do you know what was the most shocking? When I clicked on the hashtag #molestation, I found something even more disturbing. Almost every other photo that I saw was of someone joking and inappropriately touching someone else. A mockery of what is both a sad reality and the cause of a life-time of guilt, shame and a lack of self-esteem for many.

The 2003 National Institute of Justice report states that 3 out of 4 adolescents who have been sexually assaulted were victimized by someone they knew well (page 5). VictimsOfCrime.org lists that 1 in 5 girls is a victim of child sexual abuse while 1in6.org reports that studies show 1 in 6 men have experienced sexual abuse before the age of 18.

It is no surprise that “as many as 75% of those in #fostercare have been sexually abused.” That makes them a prime target for repeat abuse and more horrendous statistics. According to the website 1 and 6, they report studies in two east coast states indicating that 21 and 28 percent of child sexual abuse cases, respectively, involved reports that originated in a foster home.

Although these statistics reference children, I would like to place emphasis on how one’s traumatic experiences impact adulthood. Anyone who experiences any type of trauma, regardless of socioeconomic status, lives with it forever. AceStudy.org reports that “studies reveal staggering proof of the health, social, and economic risks that result from childhood trauma.”

The above stats are a harsh reality to swallow. Maybe that is why so many joke about it on social media, but never allow the subject to be talked about in public. In our society, it is so easy to joke about some pretty messed up things, yet when someone has something real to talk about people clam up and don’t know what to say.

Well, sometimes you don’t have to say anything. Sometimes you just need to not be scared of the truth, open your heart and ears, and listen. Allowing someone to hurt and express their hurt might be all they need to feel reassured and start to heal; even if it is something as taboo as molestation. We all need healing.

Healing Our Most Dangerous Communities: Putting the ‘Social’ back in to Social Work