byDeona Hooper, MSW
in News, Technology
0
ADVERTISEMENT
Share on FacebookShare on TwitterShare on LinkedinShare on PinterestShare via EmailShare on Reddit 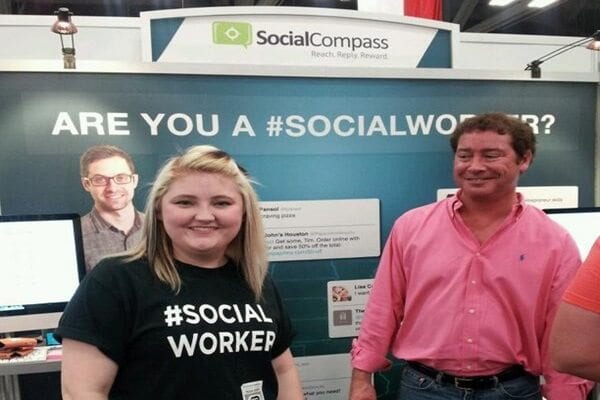 From March 7th to March 11th, South by Southwest held its 21st annual SXSW Interactive Festival which featured presentations by the brightest minds in the tech community, networking events for industry leaders, and showcases for new emerging technologies. With all the competition to get noticed, Hiplogiq, the Parent company for Social Compass, developed a marketing campaign using the hashtag #socialworker to attract industry leaders to their booth. They also provided free #socialworker T-shirts to visitors, and it appeared to have been a huge success.

The company tweeted out pictures of the Hootsuite and PepsiCoJobs Teams taking pictures with their #SocialWorker T-Shirts. My first reaction was how awesome for Social Workers to get some publicity at a major Tech Conference. Then, it dawned on me that this company has successfully branded #SocialWorker as a marketing campaign for their social marketers. According to Business wire,

Social Compass, a Dallas-based social marketing company, is changing its name to HipLogiq and will retain theSocialCompass name for its enterprise social marketing software. The software is used by big brands to harness the power of social media and engage with customers 1-on-1 across mass media social networks. HipLogiq will preview a new product, SocialCentiv, for small-to-medium businesses (SMBs) at SXSW Interactive (booth 106), reflecting the company’s evolution to a broad-based idea factory that brings a number of innovative software solutions to market.  Read More

I sent tweets out to the company to verify whether they were actual Social Workers or whether it was a marketing campaign for social marketers, and I received the following reply.

I must admit, once I realized they were a software company, my initial reaction was negative. As social workers, we are constantly fighting the negative stereotypes that prevent us from working in nontraditional social work roles such as social marketing with social media. Many social workers with technology and macro practice backgrounds who would be great at the jobs Hiplogiq has successfully branded as #socialworkers are prevented because the Social Worker title is actually viewed as individuals who take people children away or only provide mental health services. This is the reason I created Social Work Helper and built it from the ground up due to denial of opportunities in the tech field because of my social work education.

However, if we are completely honest, the hashtag #socialworker is way under utilized, and I can see how it was an opportunity for a marketing campaign. After giving this some thought, I realized their campaign actually captured the definition of social workers that we want to promote. Social Workers listen to client’s concerns, assess their strengths and identify areas for improvement, and help them extend their support networks to strengthen their unit all in an effort to increase their outcomes and productivity.

When what could appear to be a negative situation arose, I chose not to stay within those negative feelings, but instead ask myself,  “What lessons can be learned from this” or “How can this be turned into a positive”? After several correspondence with Mr. Ben Read, the Marketing Director for Hiplogic, he has arranged for one of the Co-Founders, Lindsey Madison, to join our Live Twitter Chat this Sunday at 3PM EST to discuss how we can better use social media to brand our profession. This is an opportunity for us to investigate what are the key ingredients they utilized and how do we replicate their success in branding social workers? Initially, I see they utilized a T-Shirt promotion campaign at an industry conference. Then, they live tweeted the conference to promote the event to those who could not attend. Apparently, it worked because we are talking about it.

Join us on Sunday, March 16th at 3PM EST with Guest Expert Lindsey Madison using the hashtag #SWHelper, to talk social work and tech for our weekly live twitter chat. This week is week one of our evidence based twitter chat, and I will be collecting data in an effort to measure using twitter to evaluate emerging issues. For those who may not have participated in a live twitter chat before, you can get detailed instructions at this link, and you can tweet me your responses at @swhelpercom.