Sexual Exploitation in the UK and the Need to be Loved

The National Crime Agency released figures last month which stated that over the past year, 56 UK-born children were trafficked around the country for the purpose of sexual exploitation; a figure that has more than doubled from the previous year. It was acknowledged that this figure only marks those cases that have been recorded and that there are likely to be numerous more unidentified cases. 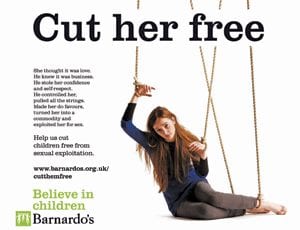 Other charities such as Barnardo’s have released snapshot figures stating that in 2012 they worked with over 140 child victims of sexual exploitation. The drastic difference in the figures exemplifies the complete lack of clarity we have on the scale of sexual exploitation in the UK. It is only through the prosecution of high-profile sexual exploitation grooming rings, such as those in Rochdale and Oxford, that public and political awareness has grown.

As a trainee Social Worker, one of my first cases was a beautiful, funny and intelligent 16 year old girl called Eva who was being sexually exploited by a 35 year old male. Eva had been referred to my service as she was homeless and was in need of accommodation.

Eva was at my office every day, making any excuse to see me. Sometimes she needed help with a problem; other times she just wanted a cup of tea and a chat. At the root of it all, Eva was a 16 year old girl who had been abandoned by her family at a very young age and who ultimately just wanted human contact and affection. Having worked with Eva, and subsequently working with many other young people who have been trafficked and exploited, it comes as no surprise to me that we are yet to grasp the true scale of the problem.

As a Social Worker who has spent six years working with criminals, I am reluctant to use inflammatory language about any sort of criminal behaviour. However, what strikes me most about sexual exploitation is just how much of a truly cruel and opprobrious crime it is. Exploiters spend years and years building a relationship with a young person, to the end aim of that young person falling hopelessly in love with them. They use the most powerful of forces, that of teenage love, to ensnare children and subsequently trap them in a life of violence, drugs and rape. It is not a quick crime. It is calculated and unforgiving.

Consequently, many young people, such as Eva, do not recognize that they are being exploited. The exploiters are their boyfriends. Eva would defend her exploiter above anything else, by repeatedly lying to Police and professionals, because she genuinely loved him. And as a young girl who had been denied love from a young age, she had no basis from which to compare and realize that love does not involve violence and rape.

If a young person does eventually realize that they are being maltreated, they are left with very few options. Some are so entangled in a life of sex and drug addiction that they permanently make the transition to adult sex worker. Others, have had their self-esteem shattered so disastrously that they do not believe that help is available to them and will never disclose their long ordeals. And those who do choose to stand up to their exploiters and inform the Police are likely to face threats of murder and rape until they back down.

In the UK we are only at the genesis of solving the problem of sexual exploitation. The more cases that come to the attention of the Police, the more information we have to learn from to prevent further abuse. However, disclosures to the Police will only ever continue to drip through and so progress will remain slow.

What is clear, is that whilst the majority of victims continue to be vulnerable children, often from care homes or broken families, a lot of time and energy needs to be focused on teaching these young people that they are loved and that nobody who claims to love them will physically or mentally hurt them. How we manage that, when those who are meant to have loved them the most, their parents, have often abused or neglected them as children, is an even greater challenge and one that not just Social Workers, but the whole community must rise to.