byPhilip Patston
in Criminal Justice, Entertainment, Mental Health
0
ADVERTISEMENT
Share on FacebookShare on TwitterShare on LinkedinShare on PinterestShare via EmailShare on Reddit

I was pretty unimpressed with the rather ugly responses to Justin Bieber’s misdemeanours back in January. Sure, some of the reactions were comical, like this YouTube video, and RuPaul’s tweet of his rather beautifully made-up mugshot in which I was told it’s transphobic appearance was no offense intended. 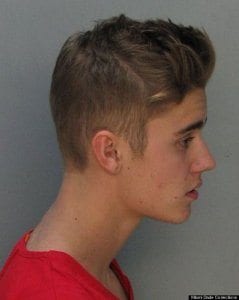 However, an online White House petition was created to have him deported from the US, for doing something that a good many if not most teenage boys do, seems pretty mean-spirited and exaggerated to me. Particularly as Americans have, until now, been happy to claim him as their own, and I didn’t even know he was Canadian until this hit the news. According to the Daily Mail,

The petition created by a Detroit resident asking to eject 19-year-old pop star from the U.S. and have his green card revoked has drawn nearly 261,000 signatures as of Friday morning, becoming the second most popular cause in the three-year history of the White House site. At 204,500 signatures, a petition to declare the extremist Muslim Brotherhood a terrorist organization is a distant second, followed by a plea to pardon CIA leaker Edward Snowden in third with 153,000 signatures. Read More

If it were within my influence, I’d lobby for it to be illegal for kids under 18 to be signed by record labels and Hollywood studios. Perhaps that’s an over-reaction in the other direction, but it seems that there are plenty opportunities on social media for kids to self-promote from their bedrooms, rather than being shoved in the public eye by money-making media moguls.

The blatant exploitation of child celebrities by the music, film and television industry has never sat well with me. Michael Jackson is a classic example of what happens when children are exposed to the crazy hype of modern entertainment from too early an age.

Even in NZ, the media seemed to be getting back at Lorde, for her tweets about their behaviour on her post-Grammy arrival into the country, by broadcasting explicit details of her sickness that made her 20 minutes late for her concert the same evening.

Let’s have a bit of compassion and generosity with these kids. No other 19-year-old boy would be deported for speeding on drugs and alcohol at 4am. I’m not condoning Justin’s behaviour and I know he’s considered a role model for kids. But he didn’t set out to be the model teenager — that’s a by-product of his fame, which was engineered by adults.

So, as adults we need to take responsibility for the direct and indirect consequences if we’re going to profit from putting kids prematurely in the limelight. We need to protect them, mentor them, and above all forgive them.