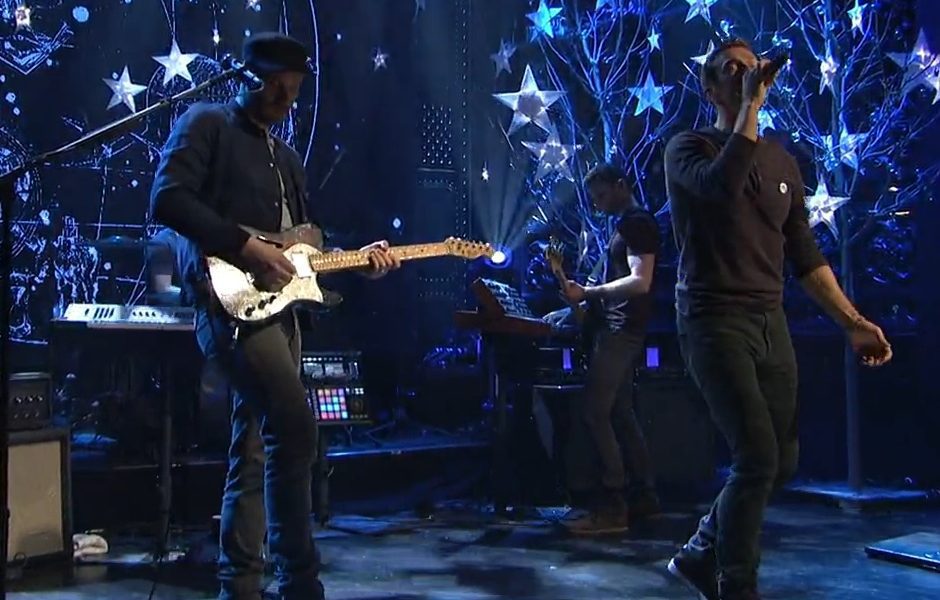 The day before its official release, Coldplay celebrated the completion of their sixth album, Ghost Stories, with a live 1 hour performance aired on NBC in anticipation of the full album being available for download on iTunes May 19th. The UK band, led by frontman Chris Martin, was started approximately 15 years ago with college friends at the University College of London.

The new album began capturing audiences, including me, with its Target commercial sampling “Sky Full of Stars” which was one of the album’s early release singles. Coldplay also made an exclusive deal with Target providing three extra tracks which are not immediately available anywhere else. Many die hard fans, known as Coldplayers, were surprised at the mainstream advertising for the Ghost Stories album. The band is widely known and respected for not allowing their music to be used for product endorsements in commercials, and they have declined multi-million dollar contracts with companies such as Gatorade, Diet Coke, and Gap as a result. However, if they are using mainstream advertisers to promote their own music, I wouldn’t consider this as selling out. As a matter of fact, the more success Ghost Stories has in sales it will translate into more money being donated to charity.

Not only is the band beloved for its great music, Coldplay has an established track record of being philanthropists who are socially conscious about the world around them. Some of the major charities and campaigns they support include Amnesty International, Oxfam, Client Earth, and Make Poverty History.

Giving 10 percent of their profits to various charities will not be a first time occurrence with the new Ghost Stories album. The band has been using the tithing concept of charitable giving since their debut album Parachutes which earned them world-wide fame with the release of the hit single “Yellow”. Members of the band include Chris Martin, Jonny Buckland, Guy Berryman, William Champion, and the unofficial fifth member manager Phil Harvey.

According to Rolling Stone’s biography on the band,

In Rush‘s wake, Martin became an outspoken advocate of fair trade (he appeared with the phrase “Make Trade Fair” written on his hand on a magazine cover) and spoke in favor of John Kerry’s presidential bid. (Martin doesn’t have an American vote, but his wife, the Oscar-winning actress Gwyneth Paltrow, does.) The band gives ten percent of their profits to charity.

Those profits went way up in 2005, when Coldplay released their third album, X & Y, which went straight to Number One in 22 countries, including the U.S. and U.K.  Read Full Article

As social workers and helping professionals, we are often submerged into heavy and emotionally draining subject matter on a daily basis. The nature of our work can leave us feeling depressed and melancholy if we are not actively identifying ways to maintain self-care. I have been listening to music from the Ghost Stories album over the past couple of a days, and I must say my mood feels uplifted and inspired. I have been experiencing writer’s block for weeks which is not very productive being the editor of a magazine, so Ghost Stories was a needed boost of inspiration. Whether you are listening while you are taking a bath, relaxing with some friends, or exercising, this album has something for every occasion, and it will carry you on an emotional journey worth taking.