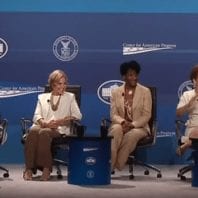 From the time we had our first memories, many of us can still remember what we wanted to be when we grew up. Childhood was a time when dreams did not have boundaries and were not obscured by societal challenges and barriers many of us would come to know as we got older. Somewhere along the journey from childhood to Adulthood, we stopped asking ourselves “What do I want to be”, and we began asking ourselves, “What can I do” under the circumstances.

Recently, I had the distinct honor and pleasure of listening to a panel of powerful women discuss their journey in climbing the career ladder and the challenges they faced along the way. I hung on their every word while trying to gain some insight into my own path and future career aspirations. What was it they did, what were their commonalities, and what were the resources these women had access to that catapulted them to the top of their fields?

There were lots of nuggets and jewels of profound wisdom that were left on the ears of the participants in the room. However, one of the statements that resonated with me the most came by way of Debra Lee who is the Chief Executive Officer (CEO) of Black Entertainment (BET). Debra Lee stated as a child, she was always taught that she could be anything she wanted to be, but she didn’t know how to define what it was she wanted. Lee stated that she had always accepted what was given to her as a result of her hard work. Unlike her male counterparts, she didn’t seek out opportunities to advance her career.

She had reached the ceiling of her current position as Chief In-House Counsel for the network, and there was no higher position for her to aspire as an attorney. It wasn’t until the former CEO presented Lee with an opportunity to move into a newly created Chief Operating Officer position that the ceiling she was previously under was removed. Before the position had been offered to Debra Lee, three men had already gone to the CEO seeking the position to be created for them.

There are several things I garnered from this anecdote and other insights from the panel of women that I would like to share with you, and here are the most important:

We live in a society where we are trained to want more for less. Jobs want to offer part-time work or unpaid internships for the possibility of earning full-time employment. Even though you are set to work a certain amount of hours, the expectation is for you to work in excess to prove your worth. This makes sense when its a symbiotic relationship where the employer is investing in your development instead of only extracting your skills and abilities as cheap labor. How many of us stay on abusive jobs because we fear a worse outcome or a bad recommendation to keep you there? How many of you are waiting for someone to acknowledge your hard work, worth, and value with a raise, time off, or promotion? What is this doing to your self esteem? Self-esteem and self-worth, is the difference between “what I want to do” versus “What I can do” under the circumstances.

2. Identify Your Challenges and Barriers

Challenges and barriers are very real no matter where you fall on the socioeconomic scale. However, those challenges may be exacerbated by the lack of resources, opportunities, and education at your disposal. Before you can change your situation, you have to identify the barriers and challenges you are up against. Admitting that your skin color or being a woman is a barrier in obtaining leadership positions is not playing the race or gender card, but its the unfortunate truth. Once you acknowledge your barriers and challenges, you can develop strategies, create partners and allies, and skills to reduce the impact of those same barriers.

3. Mentorship Is A Necessity

After listening to the women on the panel and other speakers, there was a re-occurring theme of mentorship and re-investment into creating other leaders that rang throughout the day. Not one person took sole credit for their own success. They all acknowledged someone or several someones who invested into their growth which inspired a symbiotic relationship of loyalty and hard work in return. These days, mentorship is harder to find as we continue to evolve into a “What’s in it for me” society.

More and more people who are in leadership positions aren’t necessarily there because they have the requisite skills and abilities rather than the availability of more access and opportunity at their disposal. In the past, we have expected mentorship to happen organically and naturally occurring from jobs, schools, and internships. Today, you must be more purposeful in seeking out mentors to assist your career aspirations. But, there are some pitfalls you may want to avoid on your quest to find mentorship.

Breathe…success may not happen overnight, and there may be many barriers on your path to success. However, you must keep in mind that your journey is preparation for when your moment arrives.