The month of August 2014 has proved to be one that will undoubtedly put a dent in American history. The ALS Association has broken records for their new #IceBucketChallenge campaign reaching nearly 14 million dollars in donations which is a huge jump from last year’s measly 1.7 million. 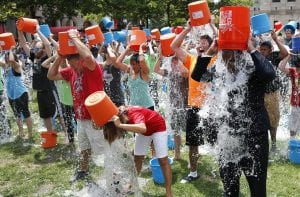 Media outlets and social media are buzzing about famous people like Bill Gates, Martha Stewart, Selena Gomez, and Justin Bieber doing the ice bucket challenge.  The most impressive that I’ve seen so far is rapper Macklemore where he takes an icing on stage during a large concert.  No wonder why the ALS Association has seen a jump in 280,000 donors.

In the video below, I share about how ALS (aka Lou Gehrig’s Disease) has impacted me personally and taken the lives of two of my loved ones.  You can watch a celebration of life video that I created for my aunt here.  I also share about an interesting viewpoint comparing the level of awareness that the ice bucket challenged has received with the level of awareness that several other causes, including racism, needs.

At the same time that millions of us are skimming through ALS ice bucket challenge videos on Facebook, an American reporter has reportedly been beheaded by ISIS and in our own backyard, Ferguson, Missouri is in crisis over police shootings.  There is no doubt that the looting, riots, and peaceful protesting is one way or another tied to the deep roots of racism that still exists today.

Also in the video, I ask you to consider the true reasons behind many of the things that are happening in Ferguson and how the world could be improved with increased awareness to tackle the issue of racism that still exists in America today.  What if the truth about racism in America today spread as wide as this ALS Ice Bucket Challenge?  Watch the video now: