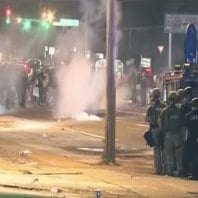 A violent threat, a criminal, a gangster, a drug-dealer, a menace, it seems these are all the things the police see you as in the United States of America if you are a black male. If the current media coverage of the shootings of Mike Brown and more recently Kajieme Powell have taught us anything, it is that to be a young black man in America is to know, despite much progress, you will still be treated as a second-class citizen.

All these young men were unarmed and all of them were killed by police officers. Just because these incidents have not made international headlines, does not mean that similar cases are not happening all across America on a frequent basis.

Many of these shootings are the result of deep-rooted racial stereotypes of African-American men. The racism is subtle and implicit. However, on other occasions the racism has been overtly hateful, such as in the case of Orlando Barlow.

In 2003, Barlow (aged 28) was surrendering on his knees in front of four Las Vegas police officers when Officer Brian Hartman shot him dead. During the investigation into the shooting it was revealed that Hartman and other officers had printed T-shirts labeled “BDRT,” which stood for “Baby Daddy Removal Team”.

Serious questions need to be asked about when firearms can be used by Law Enforcement Officers. Even if Kajieme Powell did steal from a convenience store, that does not warrant lethal consequences. As someone who disagrees strongly with the death penalty, I do not believe that the state should have the authority to kill its citizens. Even the death penalty, when implemented after years of careful consideration by a Court, still can and does get things wrong (the case of George Stinney being particularly heart-breaking).

How we expect police officers, responding to high-stress, high-speed situations with minimal information, to demonstrate clear judgement in the use of lethal force, is an impossibility. Police should of course have the right to defend themselves but this should be in the form of skilled de-escalation and disarmamant techniques. We know that it can be done.

Every 28 hours in the United States of America, someone dies at the hand of the state. This is an alarmingly high figure, especially as the state has proven, time and time again, that it cannot be trusted. Police statements from Mike Brown and Kajieme Powell’s shootings have not matched up to later released videos. In another recently highlighted case, police were shown to be lying about the arrest of Marcus Jeter. If the dash-cam video had not surfaced, proving the police had tampered with and concealed evidence, Jeter would just be one more African American male in prison victim to an unfair and unjust system.

The shooting of Kajieme Powell also raises alarm bells with regards to the police’s approach to people with mental health problems. Whilst I am not suggesting that Kajieme was mentally unwell, it is clear from the police report that they were aware, prior to arrival on the scene, that Kajieme was acting erratically and talking to himself. When they arrived, Kajieme shouted at the officers to shoot him, which of course, they did. Anyone currently feeling angry or depressed, who watched the video footage, will know now that the easiest way to commit suicide in America is to provoke the police. The police have to be trained  on how to deal with vulnerable and mentally unwell people without killing them, otherwise there will continue to be tragic consequences. Ronald Maddison was a forty year old man with severe learning disabilities who, on hearing police gunshots, ran away and was subsequently shot and killed by police officers.

Equally important, however, is the fact that the highly publicized killing of Mike Brown has rightly caused extreme anger across America and the rest of the world. Kajieme Powell did not have to be mentally unwell to act the way he did. Mike Brown’s killing sent a clear message across America that the system is racist, corrupt and murderous. It is entirely possible that Kajieme Powell was trying to further prove the words of W.E.B. Du Bois, that have for a long time reverberated around black communities: “A system cannot fail those it was never meant to protect.”

It is all too easy for the Political Class to become complacent over the issue of race. Since the election of Barrack Obama, there have been cries that racial equality has been achieved and that the Civil Rights Movement has come to a complete and happy conclusion with America’s first black President.

This could not be further from reality. Obama’s success story is the exception, not the rule. One out of nine African American men will be incarcerated between the ages of 20 and 34, and this is the rule. The fact that there are more black males in prison than enrolled in university should not be the rule. Malcolm X sums it up best when he said: “No matter how much respect, no matter how much recognition, whites show towards me, as far as I’m concerned, as long as it is not shown to every one of our people in this country, it doesn’t exist for me.”

We cannot underestimate what is happening here. Police officers are killing innocent citizens and lying about doing it. We must get over our disbelief and stop looking for other explanations as to why these atrocities have occurred and realize, what many communities in America knew already, that the police do not protect everyone equally. It is time to stand together regardless of race or religion and say enough is enough. We will take no more!