Are Sheltered Workshops A Thing of the Past

byMelissa theSeed
in Disability, News, Politics
0
ADVERTISEMENT
Share on FacebookShare on TwitterShare on LinkedinShare on PinterestShare via EmailShare on Reddit 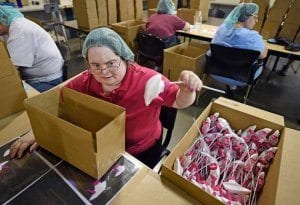 Often, the jobs are repetitive-motion tasks, do not offer much in the way of self-fulfillment, and give the employees zero opportunity to advance their position in the company. More often than not, workers make somewhere between $2 – $3 per hour which is less than half of the federal minimum wage that so many non-disabled workers are fighting to increase.

According to the Department of Labor as of August 2014, the numbers appear to support this argument because unemployment rates for people with disabilities are twice as high than people without disabilities.  You can find more information on that here:

According to an article in the Disability Scoop, Vermont has found a way to improve outcomes for the disabled after closing its sheltered workshops which states,

The sheltered workshops that are still prevalent across much of the country were shut down in Vermont more than a decade ago. And now, the employment rate of people with developmental disabilities in the New England state is twice the national average. Read Full Article

How did Vermont do it?

The University of Vermont received a grant to build programs for integrated employment in the 1980’s. They worked with state disability agencies and its success over time was enough for Vermont to realize that sheltered workshops were not how the state wanted their citizens with disabilities to be treated. Workshops were phased out over a 4-year period: new entries into workshops were no longer allowed and their funding was incrementally cut.

Of course, there were fears from the families who would be directly affected by this and rightly so. As parents, we want our children to be safe and secure, accepted by peers and part of something bigger than themselves. Could these desires be realized if workers with disabilities don’t have contact with others who are also disabled? Is there a job out there they could actually do and feel good about doing? Would society in general accept them?

It turns out, the answer is yes! In Vermont, about 80% of the people who used to be in workshops found employment in an integrated setting. The rest found other community-based services. According to the Disability Scoop article, “In fiscal year 2013, the average wage for supported employees was $9.26, more than 50 cents above the state’s minimum wage and $2 above the federal minimum wage.” How incredible is that while Vermont shows no signs of slowing its success.

It has increased its numbers of employed disabled individuals yearly. To continue their success rate, ongoing support is available in each county and doesn’t fade over time, which is common in most other states. There are also education programs with businesses that ease fears and answers questions for potential employers.

Looking to the future

Some argue the reason Vermont was able to be so successful is because it’s a small state, but isn’t that a cop out? Amazingly, Vermont was able to develop their employment program without involving the legislative process, but not every state is willing to do the work to put this program in place even though Vermont offers a living model of how and why it should be done.

In order to make sheltered workshops a thing of the past or at least a last resort, there is new legislation under consideration in both Houses of Congress that would alter their pathway into the workforce. Under Section 511 of the Workforce Investment Act, people under 24 years of age could not be employed by workshops unless they have sought employment in other settings first. This legislation also requires that state vocational rehabilitation agencies provide “pre-employment services” to students at schools in their area.

As a parent to a teenager whose disability severely impacts her, I worry about her future all the time. What will she do when she ages out of school? Today, I can’t picture a job where she can be independent because of the extremity of her physical disability but who knows where we’ll be in terms of technology and employability six years from now? My greatest hope is that all states work towards achieving the successful model Vermont has realized so that our community has as many options as it can.