byJohnathan Davis
in Criminal Justice, Diversity, Social Justice
0
ADVERTISEMENT
Share on FacebookShare on TwitterShare on LinkedinShare on PinterestShare via EmailShare on Reddit 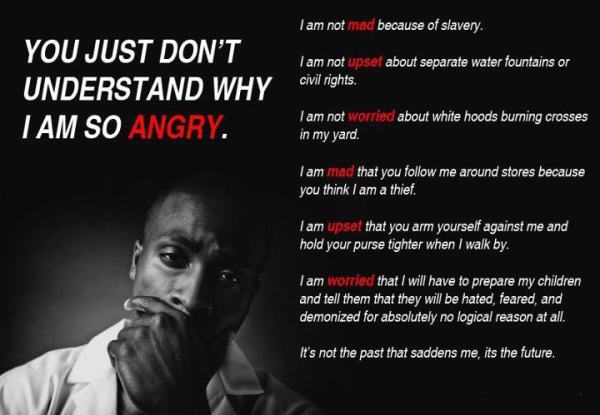 It has taken a great amount of time for me to process what has happened over the past several weeks in our country with regards to the events in Ferguson, Missouri. As a result, one of the messages I heard recently has been resonating with me which is “when women succeed, America succeeds,” spoken by President Obama at a women’s forum. What does this have to do with the underlying racism behind what happened in Ferguson? While analyzing the unfolding events of Ferguson, this quote provides a parallel and ideology for all disenfranchised groups in the United States. When inequality is eradicated, we all succeed, and America succeeds.

The inequality for African-Americans are generally no longer as blatant as the Jim Crow laws of the South, rather there is an underlying inequality that can be seen in the day-to-day lives and statistics for lives of African-Americans in the U.S. While watching the riots take place, it was hard to believe what was happening, but also made perfect sense at the same time. Anger, sadness, and most of all disappointment in the way our country handled the situation. Whether a cop, rioter, politician, professional, Christian, Jew, Atheist, black, white, male, or female, there was a wide array of emotions that were released.

I was most of all disappointed at the unfolding events because as a nation we were no longer unified, but torn in two. As President Obama stated in his address to the nation police vs. citizen trust, “regardless of race, region, faith we recognize that this is an American problem, and not just a black problem, or a brown problem, or a Native American problem…when anyone is not treated fairly under the law, that’s a problem.”

Although we have faith in our governmental systems on one hand, on the other hand we have the staggering statistics of social injustices done to the African-American community who feel like they have no voice within the United States. These social injustices were evident in Ferguson as primarily white governing bodies over the past year were giving the “boot” to the only African-American member of the school board and to the only African-American county executive while appointing their white counterparts. The African-American community believed these were racially charged actions by these governing bodies which is just one example of the underlying racism and inequality that lead to the unrest.

Racism and inequality is also evident in statistics across the board in key areas that lead to wide-spread poverty.  For instance, young African-American men are killed at least four times more by the authorities than any other race, are at least 1.5 times as likely to be a homicide victim than any other race, are incarcerated at a rate of at least six times more than whites, or that one in six African-American men will go to jail at some point in their life. These statistics could show one of two things, either African-Americans are engaging in more criminal activity or there is a huge inequality and race issue in these disparities. However, Mauer and King’s research suggests inequality and racial bias accounts for the disparities.

In Ferguson, we see this especially being a problem because “over 80 percent of police traffic stops in the past five years have been of black drivers, despite blacks only comprising about two-thirds of the population.” Additionally, blacks are twice as likely to have their car searched than whites even though whites are about 1.5 times more likely to be found in possession of contraband. Not only do we see inequality in the justice system for African-Americans but we also see it in the economic system. For example, 21% of African-Americans in Ferguson live in poverty compared to only 7% of whites. These statistics highlight the sad racial disproportionately of the criminal justice system and larger societal system as a whole, since African-Americans make up less than 15% of the U.S. population.

African-Americans are often told by well-intentioned social welfare programs, “you don’t have to be a statistic”. I question to whom is this actually preaching to because it seems that being an African-American in the United States you are labeled as a “statistic” from day one in the eyes of the law and system. You can easily see how individual cases of inequality for the African-American population easily line up with many of the at risk statistics in our society. What this means is that all of the individual efforts produced by African Americans can be so easily overlooked, because of the perception and label that society has given them is perceived as “bad”.

Processing an event like Ferguson is not easy for anyone on any side of the debate.  Personally, I have been very invested in looking at all of the evidence I possibly could that was released by the Ferguson Police Department, the views of many conservative and liberal opinion and news websites, and hearing the voices from multiple perspectives especially from police officers and African-American men. The conclusion for this fairly all-inclusive investigation is that we all need to step back and realize these protests and riots are not just about Mike Brown, Ferguson, police shooting, or brutality against African-Americans in the U.S.

There is a larger conversation that needs to happen in order for our society to become equal successfully, and it is not a conversation that is based on whites vs. African-Americans, African American cops vs. whites, or white cops vs. African-Americans. Rather, the conversation should be based on how we create a more equal society for all to live, especially focusing on groups that are considered “vulnerable”, whether it is through policy, laws and on an individual level.

What is now becoming the start of a major social movement needs to be about “if the marginalized succeed, America succeeds”. It needs to address the small gains that African-Americans have made since the civil rights movement. As a country and especially a justice system, it does not seem that we care for the lives of African-Americans. As a society we have marginalized minority groups since the beginning of our country’s history, which was originally based on freedom, equality, and a sense of endless potential. One of the major underlying factors from Ferguson had nothing to even do with the justice system, rather it had to do with economic oppression. Those who believe that in the U.S. we have reached a point of equality, especially racial equality, should get their information not only from newspapers or websites, but academic journals and resources.

These journals are written and published by very qualified professionals and experts in their respective fields, not just politicians, news reporters, or overreaching corporations with an opinion. Not only has our society marginalized African-American and other immigrants, who came willingly or by force because of their skin color, we even did it to the native people because of slight differences in skin pigmentation or cultural beliefs. In the history of the United States and many parts of the world, we as a society have never reached a point of even moderate equality.

Racism and inequality impact the lives of African-Americans, but it is important to realize there are many more places these themes can be seen in every city in the U.S. The only way we can solve this problem is together as a society, country, state, or city by acknowledging the existence of an underlying inequality based on skin color or other identifying aspects of a person. Then, we need to fight for equality in all aspects of life.

As a social worker, it is my required duty to stand up for vulnerable populations. Beyond that realization, it should be every social workers job and goal to strive for equality for every race, gender, religion, or other social status indicator to create an America that is based in true freedom and equality. As a Christian, it is especially important to remember that in God’s eyes we are all one race, the human race. Regardless of any differences that we may have when “the human race succeeds, humanity succeeds” and this is the kind of equality and reconciliation we should be striving for.

I am a social work student at Calvin College and will be graduating with a BSW along with a health and sociology minor. I am very invested in the youth of our country and believe in social equality for all and in all regions of the world. I hope to get my MSW, become a school social worker, while doing policy and advocacy work as well.

The Purpose of Education in a Democratic Society