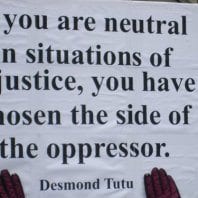 UC Berkeley Social Welfare graduate students stand in solidarity with the #BlackLivesMatter movement, and we are speaking out against nationwide police brutality and systemic violence against the Black community. As students and as social workers, we feel a responsibility and an obligation to issue a statement in support of the community action and the demands issued by the #BlackLivesMatter movement.

Our criminal justice system continues to fail the Black community. It is intolerable that the lives of Oscar Grant, Michael Brown, Eric Garner, Tamir Rice, Akai Gurley, McKenzie Cochran, Kimani Gray, and countless other Black men and women were taken by individuals who took an oath to protect and serve them. 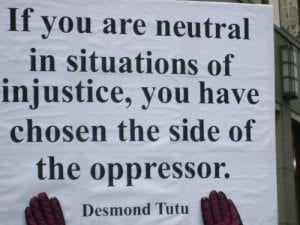 The criminalization of and violence against Black men and women speaks to larger systems of racism and oppression that we, as social workers, are ethically bound to interrupt. Students questioned the school’s response after the UC Berkeley School of Social Welfare administration had not formally issued a statement.

The silence has been deafening, and it has been particularly felt by the Black community throughout the institution. This lack of support on campus for students of color is disgraceful, and completely unacceptable, especially for an institution such as Berkeley that prides itself on diversity, inclusion, and a history of activism.

We join our social work colleagues from Columbia University, Portland State University, Washington University, Smith College, and numerous other schools and organizations that have made public statements to call for community members to demand social reform. As students at UC Berkeley’s School of Social Welfare, we too will use our voices to break the silence that pervades our academic community and act on the principles of social justice that we have been discussing in our classroom.

We are in solidarity and thankful to participate in the actions and healing spaces that Berkeley students and community members have organized: The Black Student Union action on December 4th, the walkout organized by the Black Student Union at Berkeley HS on December 10th, the organizing efforts that brought the Millions March Rally from Berkeley to Downtown Oakland on December 13th, and the December 15th  “Not On Our Watch” silent protest organized by the Black Staff and Faculty Organization (BSFO), a response to the effigies which were hung in Sproul plaza. Our goal is to uphold the #BlackLivesMatter movement’s focus on disrupting white supremacy, and we must acknowledge how Black people are mistreated in the United States, including on the UC Berkeley campus.

We invite the Berkeley Social Welfare administration as well as other Schools of Social Work to discuss how our programs can better model social work praxis and include the #SSWBlackLivesMatter organizing movement in their plans for Spring 2015. We will continue to mobilize, and we are prepared to take action on our campus and within our community – because at the end of the day, #BlackLivesMatter.