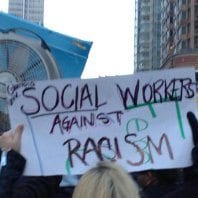 New York– Many in the New York social work community honored the reclaiming of Dr. King’s legacy, also known as the Day of Resilience and the Pledge of Resistance, by announcing the launch of Social Workers Against Criminalization (SWAC).

The emergence of SWAC is an acknowledgement of the ways in which social workers have often participated in and perpetuated institutional racism and state violence while simultaneously recognizing the capacity and responsibility that social workers have to support the already existing resilience of oppressed communities, through trauma informed care, political education, policy, and organizing initiatives. SWAC promotes the professional obligations of social workers to dismantle the structures that perpetuate state violence and mass criminalization while increasing our accountability to those most directly impacted.

Ferguson Action, activists, and community groups nationwide have come together to declare 2015 as the Year of Resistance and Resilience, directly confronting state violence against communities of color. In reclaiming the true legacy of  Dr. King, Ferguson Action announced January 15th as the day to take the Pledge of Resistance; January 18th as a Day of Resilience; and January 19th as a Day of Action.

We join collectives and organizations led by directly impacted communities such as the people of St. Louis fighting for freedom, in lifting up the call for resilience, healing and sustained organizing efforts needed for the long road of resistance to state violence, mass incarceration, and mass criminalization.

“State violence against communities of color is directly linked to the oppressive system of mass incarceration in the United States, our systemic practices of over-policing and criminalizing people of color, and the inhumane use of the death penalty in this country. The nexus between these three things can no longer be denied or ignored as Black people lose their lives every 28 hours at the hands of vigilantes or law enforcement. Social Workers are bound by a Code of Ethics that compels us to respond to torture and mass trauma experienced by communities of color, both historically, and in our present day reality,” said Shreya Mandal, Founding Member of SWAC and longtime human rights advocate in New York.

“The dominant narrative in this country is that terrible things would not happen to people of color if they would simply not ..resist arrest.. or fill in the blank. We all have been socialized to internalize this message that places responsibility for these tragic consequences, whether it’s murders, child removal or school suspension, solely on the individual. For instance the message is that Michael Brown and Eric Garner died while resisting arrest, and were therefore responsible for their own demise. It is hard for many to accept that people of color are arrested for what goes mostly ignored when committed by whites. The work of SWAC is to create opportunities for our profession to reflect upon the messages that we receive and interrupt the idea that responsibility of these acts rests solely on the individual,” said Sandra Bernabei, President of NASW-NYC.

“Humanity must learn to respect the differences among each other and leave one another alone. If we can just accept our differences, I believe that life would be a whole lot better than it is today. We must learn to respect each other and to stop antagonizing and bullying each other. SWAC promotes this goal in its initiatives,” said Larry Coldwell, Founding SWAC member and NYC Social Worker.

The visibility of state violence has reached a boiling point. Americans have awoken to the long history of police violence and extrajudicial killings of Black people evidenced by the recent deaths of Mike Brown in Ferguson, MO; Tamir Rice in Cleveland, OH; Eric Garner in Staten Island, NY; and Akai Gurley of Brooklyn, NY. As social workers we have a responsibility to stand up to injustice and to support the texture of this conversation, including the elevation of the lesser known names of Aiyana Jones of Detroit, and Shantell Davis and Kyam Livingston of NYC.

These incidents and thousands of others are reflective of the systemic problem of institutional racism and the continued criminalization of Blackness and poverty by the very institutions that are sworn to serve and protect. SWAC is proud to stand in resistance against mass criminalization and supports the efforts of social workers to build upon the resilience of communities of color.