Duffy Books in Homes Working Towards Literacy for Kids

byPhilip Patston
in Disability, Diversity, Education
0
ADVERTISEMENT
Share on FacebookShare on TwitterShare on LinkedinShare on PinterestShare via EmailShare on Reddit 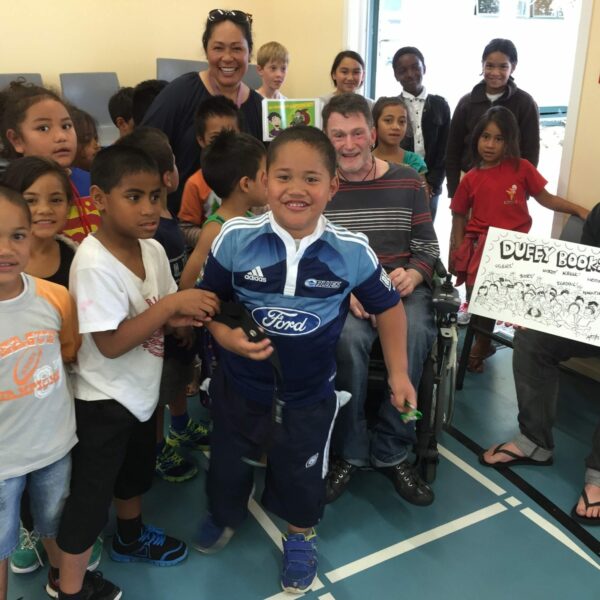 Recently, I spent an hour at Rosebank Primary School in Avondale, Auckland, speaking as a Duffy Books in Homes Role Model. It’s something I’ve done a couple of times each year since connecting with Linda Vagana, Duffy’s GM, when we both did the Leadership New Zealand programme in 2012. Duffy Books in Homes is a nonprofit created for the specific purpose of increasing literacy outcomes for elementary school children, and you can visit there website to learn more about their school book giveaway program.

It’s a tough but rewarding gig. Primary-aged kids pull no punches as an audience. I’m not the usual speaker they are used to and as I begin to speak, the giggles start.

I resist the urge to ask, “What are you laughing at?” To begin with anyway. Instead I ask all 500 to introduce themselves to me – their name, where they come from and a secret about them – all at once. The hall erupts with noise and laughter.

A few teachers look horrified that I’ve deliberately ruined the controlled quiet they’ve worked so hard to create for me (earlier a couple have asked if I’m used to speaking in front of large groups – “I’ve had a bit of practice,” I understate). I restore order and assure them I now feel like I’ve known them for years and that I won’t share their secrets. They get it.

Time to talk about the elephant in the room. “So I heard a bit of laughing before,” I reflect. A few giggles return. “What was so funny?”

“Oh you noticed. I’ve worked hard to develop a very unique way of speaking. Everyone recognises it’s me, even when I’m on the phone.”

The laughter changes, from the awkward recognition of difference to an unconscious realisation that the framing has changed. Somehow I’ve owned my difference and I’m no longer a victim – I’ve used it to my advantage.

“So what else is different about me?” There’s a pause, as if perhaps the second elephant has already become less noticeable. “Is it my shoes?” I prompt.

“Great you noticed that too! Why do you think I use a wheelchair?”

Various theories are tested – I have a sore/broken leg, I can’t walk, I walk funny, my legs don’t work.

“Maybe…but do you want to know the real reason?”

Anticipation. For the kids it’s curiosity; for the teachers it feels slightly anxious: “How’s he going to tackle this?”

“I’m just lazy.” Laughter and relief. “Why would I walk when I can just sit and move around?”

“Look, you guys are all sitting on the floor because there aren’t enough chairs. Imagine if you all had wheelchairs?”

The rest of the time I talk about reading and achievement. I help give out books. The assembly ends with a rousing rendition of Frozen’s “Let It Go” and Duffy’s song – “Going to read it. Read about it. I’m a Duffy kid and so proud of it. You can do it. Nothing to it…”

The idea is for each class to file out of the hall in silence. That works for the first class leaving through the back door. The rest, however, leave via the front door, past me, and it’s high fives all round.

It strikes me as significant that, in the space of forty minutes, I transform from enigma to elementary in these kids’ agile brains. At first glance, I’m unusual, even a threat. A few reframes later, I’m still unique, but I’m safe and approachable.

The human ability to make meaning is miraculous. The challenge of meaning-making is to keep it constructive and useful. So often we do the opposite, particularly with children.

Are Social Workers Disempowering and Contributing to Widening the Power Differential