Female Poverty is on the Rise: Protecting Women’s Rights

byNils Muižnieks
in Global, Human Rights, News
0
ADVERTISEMENT
Share on FacebookShare on TwitterShare on LinkedinShare on PinterestShare via EmailShare on Reddit

Women and men entered the economic crisis on an unequal footing. The crisis and resulting austerity measures have hit women disproportionately and endangered the progress already made in the enjoyment of human rights by women. A gender-sensitive response is necessary to halt and reverse this trend of poverty.

Female poverty on the rise

In most of the countries affected by the economic crisis, an increasing feminisation of poverty has been observed. A study conducted in 2013 on access to food banks in France revealed that the primary beneficiaries were women 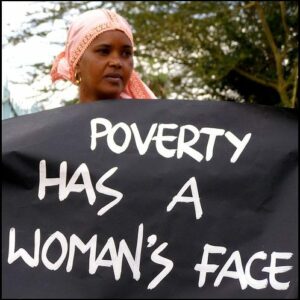 This is emblematic not just of the vulnerability of lone parent families, but also of the gender implications of the crisis. In Europe there are on average 7 times more lone mothers than lone fathers. Moreover, as indicated by Eurostat, “single women over 65 are at substantially higher risk of poverty than single men of the same age”.

In Spain, as recently highlighted by Human Rights Watch, women have been disproportionately affected by housing foreclosures related to excessive mortgages following the housing crisis. In fact, women, and especially younger women, have become more visible among the homeless of Europe as reported by FEANTSA.

These concerns have been further reflected by both the Parliamentary Assembly of the Council of Europe and the European Parliament, which have also stressed that women in poverty or at risk of poverty are more likely to work in low-paid, precarious and informal jobs, including in the field of domestic work, and face the risk of exploitation and trafficking in human beings.

Regrettably, these warnings have largely remained unheard. Many European governments have in fact implemented austerity measures which have exacerbated the negative effect of the economic crisis on women. For instance in the United Kingdom and Greece, a significant number of jobs have been cut and salaries reduced in the public sector, where female workers form the majority.

In addition, as women rely more than men on social benefits, budget cuts in the welfare system have further endangered the enjoyment of social and economic rights by women. An independent audit by the UK Women’s Budget Group has concluded that the total cuts in government spending “represent an immense reduction in the standard of living and financial independence of millions of women, and a reversal in progress made towards gender equality”. This risk of retrogression of women’s rights, and especially social rights, has also come to the fore in other countries, for example in Greece regarding women’s access to health care and in Ireland regarding childcare benefits.

The stagnation of pension rates under austerity puts older women at a higher risk of poverty as women live longer and more often alone than men, as I observed in my report on Estonia.

Women’s rights are also jeopardised by financial cuts made to programmes and infrastructures promoting gender equality, as was the case for instance in Spain where the Ministry of Equality was eliminated in 2010.

Lastly, action against gender-based violence is yet another field negatively impacted by the combination of the crisis and ensuing austerity measures. While demand for assistance among women victims of violence has been on the rise in a number of European states, some women’s shelters have had to close due to budgetary cuts.

It is time that states put an end to this disturbing “gender-blindness of public cuts”, as described in a 2013 report published by the European Commission.

In responding to the crisis, European governments should guarantee women’s equal access to human rights, including the rights to decent living conditions, work, healthcare and education. They should ensure that all women can enjoy social protection floors guaranteeing the minimum core levels of economic and social rights at all times.

There are internationally agreed standards that can contribute to the protection of women’s rights: for example, alongside the Convention on the Elimination of all Forms of Discrimination against Women (CEDAW), the Council of Europe Conventions on violence against women and combating human trafficking, as well as the 2011 ILO Convention 189 on Decent Work for Domestic Workers are all relevant texts to help ensure better protection of human rights, including women’s rights. Council of Europe countries which have not ratified these instruments should do so and implement them without further delay.

Moreover, European states should combat discrimination on the grounds of sex in all fields of life, in line with Protocol No. 12 to the European Convention on Human Rights and the Revised European Social Charter. In particular, they should ensure that none of the austerity measures that they adopt has a discriminatory impact on women, including migrant women, young or elderly women, women with disabilities or those belonging to ethnic and religious minorities.

There is a clear need for systematic assessments of the impact of the economic crisis and the recovery measures on gender equality in all fields of life, including through the collection of gender disaggregated data. Gender-sensitive policies should be devised, including by taking into account the gender perspective during the budgetary process (gender-budgeting), as stressed in the Committee of Ministers’ Recommendation CM/Rec(2007)17 on gender equality standards and mechanisms.

The agenda for empowering women and achieving gender equality in all aspects of life should not be lost to the crisis. States must take into account the impact of austerity measures on women and ensure their active participation in recovery policies.