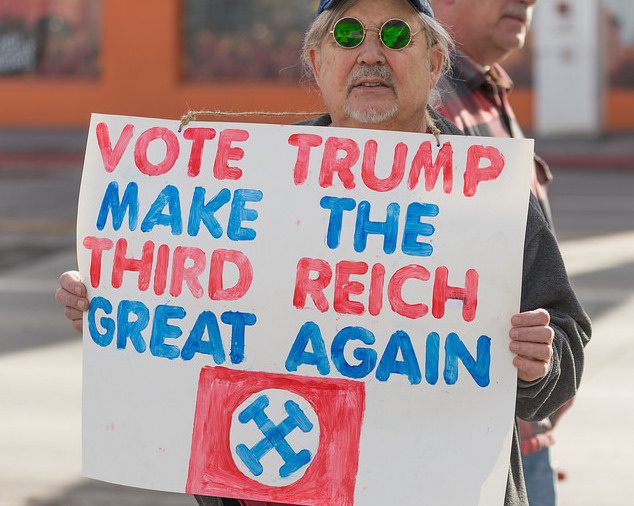 It used to be easy. The label of racist, sexist, or homophobic was a silencer on the weapon of the tongue. When a person stated views that were out of the politically correct spectrum, they paid a price professionally and publicly. However, with the rise of Donald Trump as the Republican nominee, there no longer appears to be a price for publicly embracing racist language and ideals.

Many have suggested the real problem, White Supremacy–that overt hatred for any non-white people–was institutionalized and invisible. White supremacy was lumped into the institutional mix with discrimination, prejudice, and inequality. Our policies, beginning with the civil rights act of 1964, set a precedent for addressing the institutional barriers to minorities. By 1988, the United States was addressing the individual white supremacist with censorship. But, silencing a sentiment has only resulted in the search for a new voice.

It has long been the recruitment tactic of white supremacist groups to focus on fears spawned by whatever “other” was present in a certain region. On the frontier west, the other was the Native American. In the cities, the other was the Blacks. In the southern-western border, the other was the Mexicans. But, something happened on a Tuesday night in November 2008, the worst fear came into the homes of many who had previously been silenced. It was no longer just a generalized fear of the other. It was the removal of an iconic White institution handed to a non-white. The fear moved from being offensive (in both ways) to being defensive, even despairing. Recruitment was no longer to mobilize. It was to defend against the further collapse of the Real America. Fear of the other became fear for the loss of a (White) way of life.

Empathy & Choice Architecture
The co-opting of fear changes the White Supremacist into the White Nationalist. The White Nationalist is not an institutionally-supported purveyor of hatred toward another race or creed. The white nationalist is a genuinely concerned individual who desires the best for his children and his people. Even if you are shouting for rights against the establishment, you are now the only one shouting. The rhetorical technique of the white nationalist is to claim victimization. And guess what, empathy demands that we listen.

This could be one reason for the inadequacy of our categorizations these days. The simple determination of whether a person is racist, sexist, or homophobic was never adequate as a basis for tolerance and appreciation of diversity. But, it worked in an institutional context to describe policies that systematically discriminated against specific groups based on some ethnocentric ideal.

As the unit of analysis moves to the level of the individual, categorizations will not be useful. Each individual is unique which comes with a unique set of concerns. Having children or not, levels of education, life goals, family connectedness, and a host of other characteristics form the profile of each person. Their choice architecture is built from this individualized profile, in the context of their immediate and social environment, impacted by the interactive effects that form their perception of self and the reality in which they live.

The good news is that we can mathematically map this complexity in operational research. Those may be two words that you are not comfortable applying to social science issues or social activism, but math and research are critical to interventions that promote dignity and worth of each person. It is more evident now that labeling the oppressor and demonizing the group runs counter to progress. What we have missed is that the need has shifted from the institutional level to individual level in the co-opting of fear.

The Empathy Standard
Let us first begin with a clear understanding of empathy. Empathy is defined as an ability to feel as the other feels. It is often distinguished from sympathy, which is to feel for a person. Empathy is more holistically to be distinguished from prejudices. Prejudices are characteristic means of self-protection or self-defense. More holistically, empathy is the ability to see the choices of the other as reasonable.

This definition allows social workers to work with clients whose behaviors have proven reprehensible while valuing the dignity and worth of each person. Even more importantly, this definition of empathy enables social workers to track the mechanism employed in the choice behavior. Once the mechanism is understood, the decision points can be disrupted with new information, intervention, influence, or insight. The disruption offers an expanded choice set and may result in new behaviors.

Without empathy-inspired dialogue on a topic, prejudices turn to anger and an insistence on being heard. Without empathy expect violence, disrespect, and self-promotion over others as less-than.

The Co-Opting of Fear
Which is more powerful, hatred or fear? Hatred can motivate many intentional destruction of things that are disliked. But, fear creates more things to rail against from imagined visions of even unreasonable things that may be. Supremacy groups have long used fear as a way to recruit new members. This was more of an institutional approach that reached out to individuals. It provided a target for the generalized sense of despair and hopelessness felt by the impoverished. It galvanized and educated that generalized sense into a frenzy of hate. That was the utilization of fear.

Utilization of fear was defined by Lyndon B. Johnson in 1960:
“If you can convince the lowest white man he’s better than the best colored man, he won’t notice you’re picking his pocket. Hell, give him somebody to look down on, and he’ll empty his pockets for you.” LYNDON B. JOHNSON, 1960, remark to Bill Moyers, “What a Real President Was Like,” Washington Post, 13 November 1988

We see the results in a speech by Hillary Clinton. It typically takes some version of the following form:

Let’s be honest, for a lot of well-meaning, open-minded white people, the sight of a young black man in a hoodie still evokes a twinge of fear. And news reports that poverty, crime, and discrimination evoke sympathy, even empathy, but too rarely do they spur us to action or prompt us to question our own assumptions and privilege (June 20, 2015 speech to US Conference of Mayors).

The problem is that we, as social activists or individual citizens, have not fully understood the fallacy of that “twinge of fear.” This lack of understanding is what Jeb Bush is saying he wants to work against, “I don’t think Barack Obama has bad motives,” He said on the debut of the Late Show with Stephen Colbert, “We have to restore a degree of civility.” Bush should have stopped there.

The co-opting of fear means that you are no longer dealing with institutional “other sides” of any argument or system failings. The interactions are now personal. Many in the Colbert audience noted the shift. Immediately after Jeb Bush uttered “I don’t think Barack Obama has bad motives,” a few in the audience began applause. Bush continued before the applause took hold finishing with, “I just think he’s wrong on a lot of issues.” The applause stifled. Bush turned what sounded like a conciliatory, constructive tone into a personal attack almost immediately. He could have talked about “his policies,” or better “I disagree with the Affordable Care Act,” or even better, “The Affordable Care Act has 12 provisions that limit patient choice.” In a policy discussion, the policy should reasonably be central, not the individual discussants.

Over years of political correctness, hidden resentment, and what Elisabeth Young-Bruehl calls psychologizing-sociology rhetoric has moved to individual characterization. Fear generalized at the institutional level has moved and morphed into fear personified at the individual level. The co-opting of fear has reduced policy failures to personal failures. Governance has been reduced from a sociological construct to the “liking” of one personality over another. Speaking your mind and refusing the politically-correct response is heralded as honesty and courage however ignorant and erroneous. A quick example can be shown in polls. According to a CNN poll back in 2013, 46% of people asked were against Obamacare. Only 37% were opposed to the Affordable Care Act. Same law. But, reducing policy to a “do you like this person” question creates different choice behavior.

This causes a fundamental shift in the way we work to support tolerance and move toward the celebration of difference. No longer are people simply misinformed and their generalized sense manipulated by the institution. Many are now genuinely, and individually fearful for their livelihoods, their children’s opportunity, and their freedom. Imagined or not, this new reality does not respond to institutional changes. In fact, the institutional actions to level the playing field and erase the majority advantage are seen as further disenfranchising the individual.

Now, that reality is individual rather than institutional, the only solution is empathy. It is to see the complaints of each individual as valid and worthy of our attention. The empathy solution ensures that each individual is heard. It maps their process of reason, and compares their experience to what our policies intended. Without this empathetic analysis, by denying the voice of those who perceive themselves to be eventual minorities, we others become oppressors. People who feel silenced and who fear extinction will revolt in discontent.

They will rally behind someone successful who speaks the fear, gloom, and despair that they feel. And, others will support this movement. Their support is not because they know the origins of supremacy and ethnocentrism that birth the movement. They support because they are empathetic to–they see as reasonable–the cries of people who have been silenced and hushed because their views were not politically correct. They support because they are tired of having to clean up their language to express overreaches and erroneous implementations of laws meant to create equality. Empathy, my fellow social workers, is not based on our agreement with the other. It is our ability to see their reason and continue the often uncomfortable conversation toward a comfortable resolution.