byShauntia White
in Global, Human Rights, LGBTQ, News
0
ADVERTISEMENT
Share on FacebookShare on TwitterShare on LinkedinShare on PinterestShare via EmailShare on Reddit 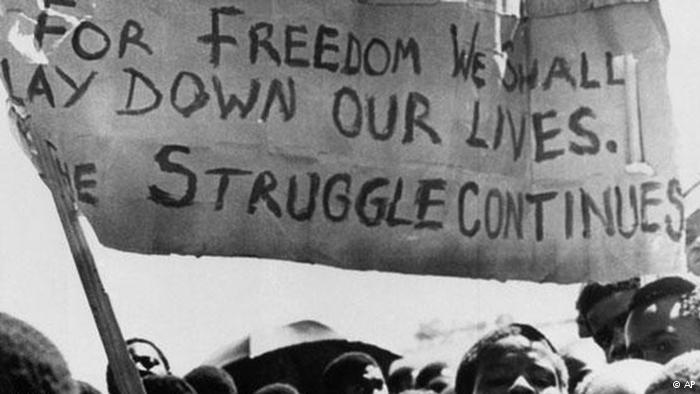 June is a special month to salute civil and human liberties — from Juneteenth, the oldest known celebration commemorating the ending of slavery in the United States, to Lesbian, Gay, Bisexual, and Transgender (LGBT) Pride Month, which honors the 1969 Stonewall riot in Manhattan, a tipping point to the Gay Liberation in the United States. However, June 16, 1976, also commemorates the youth uprising which led to the dismantling of apartheid in South Africa.

To Americans, commemorations can honor bravery and self-sacrifice, or they can remember those who have fallen victim to an unfortunate event or a series of heinous acts. But nevertheless, here in America — where Liberty stands clothed in democracy with one hand clenching independence and the other raising the importance of universal knowledge that brings light to all — tragedy no longer unites this deeply divided nation.

Of course, America is far from alone in its attempt to push a more unified front in the midst of tragedy, whether one we commemorate often or one we mourn just yesterday. South Africa — still a chronically racially divided nation — is a country where America’s struggles to end racial segregation and discrimination against African Americans in the 1960s and 1970s helped inspire its anti-apartheid movement in the mid-1960s.

Much like the origin of the 1960s Civil Rights Movement, the joint forces between students and youth in South Africa echoed the same courage and extreme tenacity of African American students protesting their unequal status in the state’s segregated educational system. Unlike the strides South Africa has made to celebrate student advocacy and its contribution to the larger society, America has not yet begun to observe, or even embrace, the strength of young people in the 1960s who sought to return the power back to ordinary citizens. As a result, this may be one of our nation’s biggest oversight: the lack of history we share about social movements inspired and led by our youth.

Today, in South Africa, millions honor the memory of a national tragedy — the tragedy that began with thousands gathering at a peaceful student protest against the education system of South Africa during Apartheid rule but ended with hundreds of young people killed by the ruling government. This historic event, also known as the June 16th, 1976 Uprising, continues to pave the way for the youth of South Africa to carry on the spirit and legacy of those who withstood the painful and unjust political force of the Apartheid State and demanded more for themselves and their community. This year marks the 40th anniversary of the uprising.

Millennials and Entrepreneurship in South Africa

After many decades of struggles, the South African government ended apartheid, but today’s Millennials still face many socio-economic challenges in modern times that are often overlooked. In this now diverse nation, largely made up of young people who constitute 66% of the total population, many are unemployed despite being qualified.

However, too many South Africans, the reality of owning a business as an alternative solution to unemployment is far too unlikely. According to the annual Global Entrepreneurship Monitor (GEM) South Africa Report (2014),  South Africa’s rate of entrepreneurial activity is undoubtedly low for a developing country. Less than 7.0 percent of the adult population in South Africa is engaged in some form of entrepreneurial activities, while less than 3 percent already own or manage an established business. This report also reveals that for every 10 adult males engaged in entrepreneurship there are eight females. However, the number of women in entrepreneurship has increased over the years primarily due to government support, but also because of the growing perception of opportunities to start a business.

The report also suggests that South Africa needs more Millennials – male and female alike – to consider starting businesses. But yet, there are very few governmental initiatives that are contributing towards entrepreneurial activities by its citizens. Historically, the most effective ones are supported by private companies or grassroots organizations that inspire to make a difference and increase the entrepreneurial propensity among all of South Africa, especially among their peers.

“Support Africa’s optimistic job creator towards success with the same passion and deliberation that propelled them into the arena of commerce, social enterprise, and industry – through providing accessible business in research, marketing and assisting in fostering their next U.S. or South African/African based partnership or collaboration”.

In fact, Ndosi Strategies in partnership with Brand South Africa will launch the first annual conference in NYC, on June 25th. South African youth entrepreneurs, both U.S. and S.A based, will come together and discuss their business ventures, the youth’s role in South Africa’s development, and the entrepreneurial movement as a vehicle for economic development and stability. The keynote speaker will include international branding & business expert, Mr. Thebe Ikalafeng, Founder of award-winning African brand and reputation advisory firm, Brand Leadership Group. Moderating the discussion will be Yolanda Sangweni, Deputy Editor of ESSENCE.com, and Founder of AFRIPOP.

Young people have always been viewed as the heart of socio-political change in South Africa. However, what is not well-documented is the contributions social workers made to help usher such change in South Africa through entrepreneurship, policy-making, practice, and community service. In events scheduled for later this month, we will be further exploring how social work and entrepreneurship can work collaboratively to improve outcomes for youth.

As a result, today I challenge my fellow budding social workers from all walks of life to learn more about Soweto, to uplift high school students or mentees in your local community by sharing this story with others, and to consider participating in one of two Twitter chat discussions focused the state of youth in South Africa and the role social workers play in developing the next generation in youth in South Africa as global change agents and social innovators.

Together let’s re-ignite the fire of Liberty here in the United States, but also in South Africa, so younger generations won’t forget those who pushed justice, freedom, and democracy forward.

Shauntia White, MS is a social work student at the University of Maryland School of Social Work, located in the heart of Baltimore City. She holds a master’s degree in human development and family science from Oklahoma State University. She is the Founder and President of YSocialWork, an independent 501(c)3 focused on applying social work values to political systems by engaging social work students in young professionals in leadership development, advocacy, and innovation. She is former recipient of the Hillman Entrepreneurs Program at the Prince George’s Community College and University of Maryland, the Creativity, Innovation, and Entrepreneurship Scholars Program at Oklahoma State University, and the Entrepreneurship and Empowerment Program in South Africa. She is an alumna of the Women’s Campaign School at Yale University, and serves as a student representative for the Greater Washington Society for Clinical Social Work.