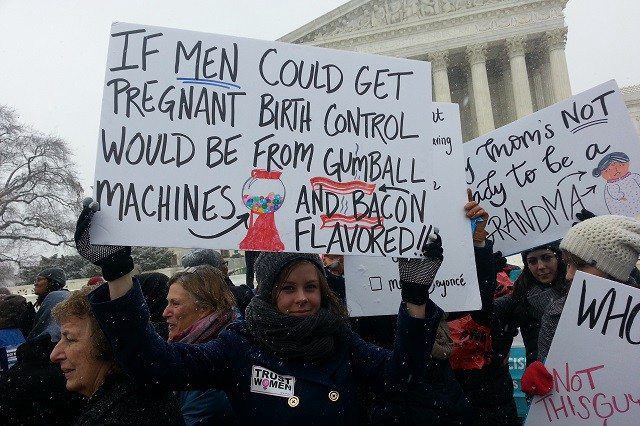 In the recent Supreme Court of the United States (SCOTUS) decision Whole Women’s Health v Hellerstat, it was determined that Targeted Regulation of Abortion Providers (TRAP) laws create an undue burden for women seeking abortion.  In the latest ruling in Alaska, the decision overturned their state-level parental notification law because it violated the Alaskan constitution. These decisions have begun to unmask biased, unscientific abortion policies in the United States, and they should be celebrated everywhere as monumental victories for client self-determination and human rights.

These rulings represent the possibility that the tables may be turning in favor of fact-based abortion policy. Also, they give advocates in this area hope that when abortion policy represents a biased, undue burden, as TRAP laws and parental notice laws do, they will be considered and ruled as such.

These cases also create precedents for the contemplation of the undue burden created by other laws restricting abortion, including mandatory waiting periods, which strip self-determination from social work clients, likely causing secondary trauma when clients are attempting to access a routine health procedure that is safe and absolutely legal in the United States.

The removal of these additional legislative barriers are a particular triumph for social work clients, who at the very moment of this ruling were already finding it harder and harder to access abortion because of the burden of pseudoscientific policy restrictions. These restrictions have been implemented at unprecedented levels since the 2010 midterm elections. Abortion access is such a problem in Texas that women were already attempting to end their own unwanted pregnancies without medical intervention which harkens back to the days of illegal abortion.

While these rulings will not address all abortion access problems immediately, they represent a rational response to moralized abortion policy, which will keep clinics open in Texas and facilitate abortion access for adolescents in Alaska that is on par with that of adults.

The impact of these decisions is also distinct because they expose the intent of the policies, which was to make abortion inaccessible by victimizing vulnerable patients with unnecessary regulation, while couching the laws as means to make abortion safer, when abortion services were already safely provided for both adults and adolescents under existing clinic regulations.

Current decisions are drawing attention to the rhetoric falsely decrying a need for women’s safety in the form of TRAP laws. They expose the actuality that unnecessary abortion regulation decreases family safety by impeding the timing and spacing of births and sets the stage for forced pregnancies similar to those experienced by women in countries like Ireland and Nicaragua where abortion is illegal outright.

TRAP and parental consent laws have been exposed as tools of oppression used by politically motivated legislators to cut off access to abortion for a subset of the population. They also bring to the forefront the understanding that abortion is a low-risk procedure that can be safely performed in clinic environments under existing regulations, for both adults and adolescents.

These decisions also expose the conflict between politically motivated abortion policy in the United States and a sound public health approach to the reproductive health needs of vulnerable groups, by demonstrating that unscientific abortion policy keeps economically disadvantaged women from accessing abortion, while merely inconveniencing adult women of means who have the resources needed to overcome the restrictions. Additionally, these rulings open the door for a scientific presence in our nation’s understanding of abortion and the laws and policies that govern it, because if we can demonstrate that these laws are thinly-veiled attempts to restrict abortion access, then we can demonstrate that the other laws are too.

The overturning of these laws has not created a panacea for abortion access in the United States.  During the time SCOTUS was considering their case, new anti-abortion tactics designed to stigmatize abortion were implemented in the form of fetal pain and funeral policies, which took effect over the summer and spring.

These pseudoscientific laws are currently traumatizing abortion patients who are already facing difficult decisions around unwanted pregnancies that are often surrounded by trauma. Moreover, these laws highlight how out of touch state legislators made up of primarily white, upper-class men are with the best interests of their constituents. They also reflect an ongoing preoccupation with promoting abortion stigma to the detriment of addressing other pressing social issues such as poverty and economic development.

The SCOTUS ruling does not address the Hyde amendment, which restricts all federal funding of abortion in programs such as Medicaid, military health programs and prison health programs. Hyde prevents low income women, and women of color who are more likely to live in poverty and rely on Medicaid, from accessing abortion. This is a prime time for social work advocates to highlight the burdens that Hyde creates, which include completely blocking access to the procedure for those who cannot gather the funds for it.  Social work advocates can call attention to the ongoing burden of Hyde by lobbying for the law’s repeal.

In order to support self-determination, the National Association of Social Workers advocates access to all forms of reproductive health services, including abortion. If we are to achieve social justice for women and pregnant people in the United States, it is imperative that social work capitalizes on these recent rulings to revive our advocacy efforts in this area and work to eliminate pseudoscience in remaining abortion policy.

Write about abortion, talk about abortion, normalize abortion and contact legislators to voice support for our clients needing access to abortion. These rulings represent the tables turning towards a more scientific approach to abortion in the United States, and if we make the best use of this opportunity we can lead the way towards rational abortion policy in that promotes access to the full range of reproductive health options for all clients everywhere.

Gretchen Ely is an Associate Professor at the University of Buffalo. Her teaching interests include policy, with research exploring policy in addition to health disparities, behavioral and physical health related to intimate partnerships, and social justice. She is a member of the Council on Social Work Education, the Society for Social Work and Research, and the Social Work in Health Inequities Network. View all posts by Gretchen Ely