byElaina Lin
in Poverty, Social Work
0
ADVERTISEMENT
Share on FacebookShare on TwitterShare on LinkedinShare on PinterestShare via EmailShare on Reddit 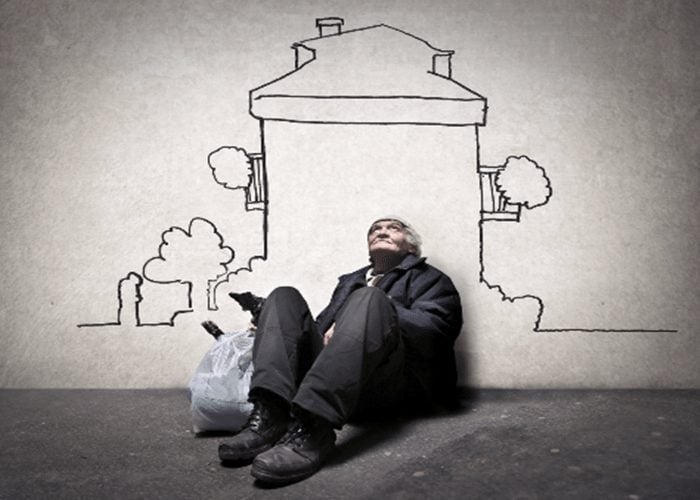 Despite positive trends showing that homelessness has steadily decreased since 2007, nearly 600,000 people were homeless in the US at the beginning of 2014. In fact, two cities in the US rank in the top worldwide for cities with extremely high homeless populations. This is relatively high considering the US is the “richest nation” with 41.6 percent of total global personal wealth.

Most homeless people, defined as people sleeping outside, in an emergency shelter, or otherwise transitional housing program, don’t choose to live on the streets. Unfortunately, there are common misconceptions regarding the stereotypes and habits of homeless people, such as having mental illness or drug dependency, further tainting the image society has on this underprivileged group. However, a significant portion of these people have been reduced to homelessness by an increasingly common cause: evictions.

This demographic of the homeless are evicted tenants, often with families, who are in financial situations where they can no longer afford to live under a roof. According to HomeStart, a housing assistance program, 36 percent of eviction cases will result in the tenant being evicted, driving low-income tenants to face impending homelessness. With the minimum wage being insufficient to support a working family, affordable housing for low-income households can be scarce. In fact, in just New York City alone, around 22,000 families per year have been ordered by court to leave their housing premises.

Often those who are suddenly evicted have insufficient time to search for a new home or acquire the necessary finances for their next rental, leading to the possibility of homelessness. It is illegal for a landlord to kick a tenant out by force, without court order. Evictions, intended for legitimate reasons such as lease violations, failure to pay rent, or property damage, are increasingly being used on low-income tenants illegally or unfairly as a result of increasing gentrification in certain neighborhoods such as Brooklyn, New York City.

What are some preventive measures?

Thankfully, tenants at risk of not having a home do have legal avenues and resources to fight back. The Institute for Research of Poverty, at the University of Wisconsin-Madison, states that “tenants with legal counsel are much less likely to be evicted.”

Michelle Yang, a licensed US attorney and legal counsel advises, “Knowing the law and your rights is key. Read your lease carefully and look up your state’s landlord-tenant laws. Carefully document and build your defense, and be prepared to argue your case at an eviction hearing. You can also take advantage of free legal services provided by organizations such as Legal Aid or the NY Housing Courts.”

There are also programs such as Coalition for the Homeless, whose mission is to save “households each year from the trauma of homelessness.” They can offer grants to tenants who need the funding for their current rental housing. Initiatives like these give people the chance to resolve their financial situations without having to resort to leaving their property immediately. The Institute for Research of Poverty asserts that such affordable housing initiatives can be the most powerful and effective method to reduce poverty.

A home for every homeless

It’s important to recognize the unique story behind each homeless individual that we see. Even though society is taking action to alleviate some of the causes of homelessness, the problem can be overlooked once housing programs have been launched. Taking the steps and initiative in assisting the homeless does not mean the problem has been entirely wiped away, despite how optimistic the media may portray it. We must be aware that preventing and addressing homelessness is a continuous process.  On the other hand, identifying the roots of homelessness can inspire more people to be proactive in driving eviction prevention programs or even lawyers to volunteer to participate in housing courts to help those who may be at risk of being without a home.

While we may not always be in a position to immediately help the homeless, there are certainly programs and projects we can embark on to help minimize homelessness and make sure people are living in their homes comfortably without fearing they have to leave. Whether you are a lawyer volunteering for a housing court to help tenants, a passionate civilian willing to help out at a local housing program, or someone donating their time and energy to provide resources to the homeless, every bit of help makes a difference.

Elaina Lin is a writer and the editor for Legal Templates, where they provide people the right tools and resources to be their own legal advocates. She works alongside licensed U.S. attorneys to produce factually accurate and up-to-date material in social and legal issues. Her publications explore strategies and solutions for people seeking to conquer challenges in areas of real estate, lifestyle, business, and finance.