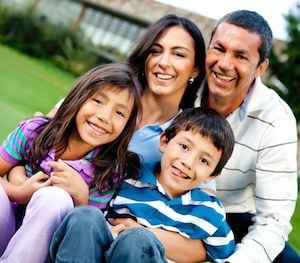 As a counseling professor, I train my students to ask their clients: “If you succeed in making the changes we’re talking about, what will be better?” So I have to ask: Has the President thought through the consequences of his actions on immigration?

America was built on positives. We didn’t become great by preventing, arresting, and deporting. Why does the President want us to return to a past we never had? Is it even possible to build something great while focusing on tearing down or walling off?

I’ve conducted more than two decades of research on population studies, and here’s what I can tell you about Latino stereotypes: It’s time to get rid of them. The fact is, immigration is at the core of America’s greatness, and Latinos are very much a part of that greatness.

Here are some of the key facts from analyses of Census data that I’ve done with my colleague Jorge Garcia and from other sources:

First, Latinos do share our culture and do adapt.

The wall-builders say that “Latinos don’t share our culture and won’t adapt — they just aren’t like us.” But in the past, some Americans said the same thing about each wave of Irish, Italian, and Polish immigrants.

Research shows that after three generations of being here, Latinos look remarkably similar to those previous immigrant groups. (Of course, most Latinos in the US aren’t immigrants but have been here for many generations – much longer than many other groups.)

Latinos are on average younger. However, that’s a big benefit for a US population that would otherwise find it much more difficult to grow the economy and pay for programs like Social Security that are based on younger people funding older people.

Second, Latinos are not criminals.

Several studies have failed to show any relationship between immigrant presence and increased crime rates. In fact, a recent study showed that areas with the most immigrants have lower crime rates. It’s important to remember that to be here without documents is a civil violation not a crime; think of it as the equivalent of traffic tickets.

Third, Latinos are not taking your jobs.

The biggest difference between Latinos and the total US population is in their types of occupations. In both 2000 and 2010, the majority of Americans overall were employed in managerial and sales jobs. For Latinos, the majority were employed in either low-level white collar or blue collar occupations, both skilled and unskilled. So, are they taking our jobs? Not as long as these types of occupational differences persist. And yesterday’s Day Without Immigrants protest is a prime example of this fact.

When Latinos do what other immigrants did and become more educated, they’ll move up and start taking some of those white collar jobs. And that will be a very good thing for America, because we’re already looking at huge shortages of educated people as the baby boomers retire.

Are Latinos a drain on our society because they use social services? They do use services, but also contribute significantly to the tax base that pays for those services.

Other Americans, for example those in rust belt states with aging populations, use a lot more services than Latinos, and already are benefiting from younger people supporting the tax base.

Sadly, Latinos who are undocumented, provide an especially big boost to the economy – they pay the taxes but aren’t eligible for benefits. These aren’t the only myths about Latinos. Language acquisition? Same as previous immigrants. Educational attainment? If Latinos get to college they tend to major in similar disciplines as the rest of the country. Military service? Latinos have a long tradition of serving in the US military.

Even the causes of death are similar for the total US population as for Latinos – both die from the same top diseases: heart disease and cancer. Many Latinos, especially in border areas, have retained the ability to speak Spanish. But English is their primary language and American culture –from sports to movies – is the only one they know or care about.

Begging the question of whether it’s possible to build greatness by tearing things down, the obvious conclusion is that Latinos are more like other Americans than they are different. Let’s build relationships and not walls.