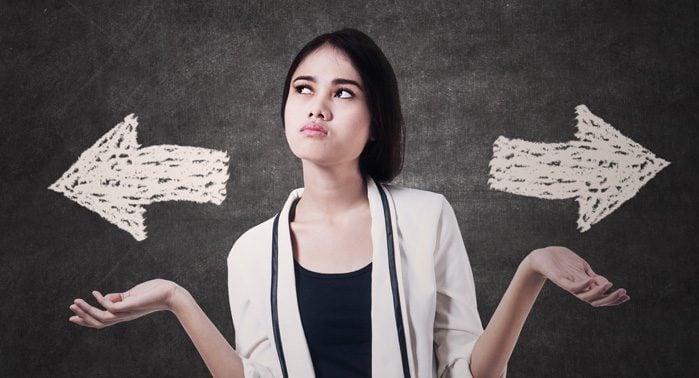 But here’s a couple of other addictive “circumstances” we don’t talk about: certainty and knowing. If there are a couple of things we all crave for, it’s assurance and understanding.

Western culture in particular thrives on these two qualities. We get paid for having them and punished for not. Certainty and knowing are the foundations of our most valued institutions: education, medicine, law, justice, business, broadcasting, politics, marketing, science, religion…[add your favourite here].

Everyone claims to know what’s good, bad, right, wrong, best, worst, cheapest, stylish, in, out, needed, not needed, true, false, left, right, etc, etc. And everyone’s certain the sun’s going to rise, the economy’s got to grow, the day after today is tomorrow, the day before is yesterday, particular rights are sacrosanct, some will go to heaven, some to hell, there is a God or there is no such thing. Ad infinitum.

But how certain can we be about what we know and how do we know what’s certain? Natural disasters, terrorism and unforeseen crises show us we can seldom be sure of anything.

Do you think your GP knows what’s wrong with you? I never think mine does. I don’t mean that as a criticism; he’s a great doctor. But his job is not to know what’s wrong, it’s to make an educated guess. I had a sore ear last week and, when he looked in it, he didn’t say, “I know it’s allergy.” He said, “It looks like allergy. We’ll try some eardrops and come back if it hasn’t settled down in five days.”

Religious people, especially leaders, claim to know there’s a God, heaven, what’s a sin, what’s not and so on. But they don’t know. They may believe it, but belief is not knowledge, it’s “an acceptance that something exists or is true, especially one without proof.” (Apple Dictionary).

Even in some areas of science, particularly quantum physics and evolution, scientists may say they know how quantum particles behave or how the universe began, but again, they can only believe in a theory based on the perception of the human brain. How the world works can only be a mystery, because we can only subjectively experience it.

I have always said the best job in the world must be being a meteorologist — who else gets paid so much to get things wrong so often? And yet a weather forecaster rarely says, “We don’t really know what the weather’s going to be like tomorrow, but it could be sunny.” Rather they usually give the forecast like they know for sure.

With the illusion of knowing comes the perception of certainty. We live our lives assuming things will be as we predict them to be. We assume that we’ll wake up in the morning and go to work; that our kids will be straight; that the aeroplane will be on time; that the internet will work. Then, when our assumptions turn out to be wrong, we rage, blame, stress and get upset.

Admitting to not knowing or acknowledging uncertainty are uncomfortable spaces. We worry, get anxious, get scared. So we do everything in our power to know as much as we can and to avoid uncertainty by strategising, planning and scheming. Our days, our weeks, our relationships, our careers, our social policies, our lives.

But, when I have to plan a project or a strategic process, I’m usually reluctant and cynical. My definition of a plan is something you look back on to see what you didn’t do. I stand by that definition because, of all the things I’ve been involved in planning, nothing has ever gone to plan.

You may be thinking, but if nobody planned, nothing would ever get done. I would reframe that by saying, if nobody had intentions nothing would ever get done. Intention, defined, includes planning, but interestingly, in logic, intentions are “conceptions formed by directing the mind towards an object.” The word’s origin is late Middle English, from Old French entencion, from Latin intentio(n-), meaning ‘stretching’ or ‘purpose’.

So I’ve always, or nearly always, had intentions: to be successful, happy, reasonably wealthy, generous, respectful and respected, authentic and aware. But I’ve never planned to do things to achieve them. They’ve all happened, but I haven’t known how and I was never certain I’d achieve them. There have been times when I’ve felt I’ve lost my purpose, or I’m not feeling stretched, but I’ve made some bad decisions when I’ve tried to recapture certainty. I think I’ve now learned to be still in the uncertainty of it all and wait.

It’s interesting that certainty has two antonyms, possibility and impossibility. This suggests another power of uncertainty: being open to possibility. Uncertainty can also render impossible unwanted outcomes. If you are uncertain about failing, for example, you may just make failure impossible.

But what is the power of not knowing? For me it is the gateway to freedom. When we don’t know about things we don’t judge or make assumptions, we invite curiosity, creativity and authenticity into our world. We are free to reframe, reinvent, reimagine and re-create. When we don’t know about people, we are free to find out about ourselves, to marvel at our diversity and to build relationships built on wholeheartedness, respect and trust.

Uncertainty and not knowing are two things we are conditioned to fear and avoid. The question is though, by steering clear of them, what are we missing out on?

Barbara has a Masters in Health Science and is a registered Counselling Psychologist with the New Zealand Psychologists Board. She is also a full member of the New Zealand Psychological Society and the Institute of Counselling Psychology. She currently works as therapist within a specialist public health service, supporting clients with both mental health and substance use concerns. She is also the part time content manager for DPSN, where she blogs regularly about issues of diversity across all areas of society, but particularly in relation to mental health and addictions