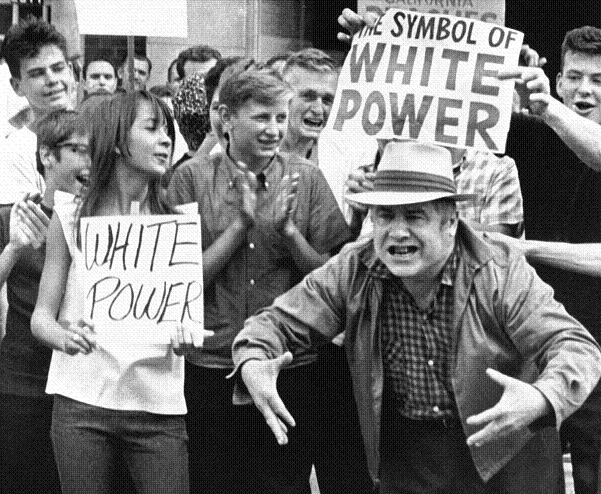 I can’t be a racist.

I certainly don’t want you to think I’m a racist. My family never owned slaves—they were coal miners, which was practically slavery. I believe in diversity, inclusivity, cultural humility, and cultural proficiency and whatever PC term-of-the-week we use for this stuff.

I want to prove to you I’m not a racist. I attend rallies and carry signs.  I was there when they voted to remove the Confederate flag from the statehouse grounds. I don’t vote for racist candidates and express my horror at racist comments, especially from our leaders.

I thought I wasn’t a racist. The truth is, I view the world through blue eyes. The world interacts with me as a person with very pale skin. I may not want to be privileged (maybe I do) but damned if I’m not. I’m often treated differently than people of color. If police pull me over, I don’t fear for my life, I fear for points on my license. If I walk down the street in a sweatshirt with the hood pulled up, people say good morning and comment on the cold weather. They don’t look at me like I’m about to rob them.

When I see rage on the faces of African Americans, I sometimes think—quietly, of course—they may be overreacting. After all, we need to love each other and put the past behind us. We are a rich tapestry of different people and that’s what makes our nation great. This is 2017—time to move forward!

And then Charlottesville happened.

And then I heard the President defend the Nazis and racist, alt-right rally participants.

And then I saw this video and watched white supremacists spew hatred against blacks and Jews while someone was doing CPR on a victim hit by the car.

And I saw this man: 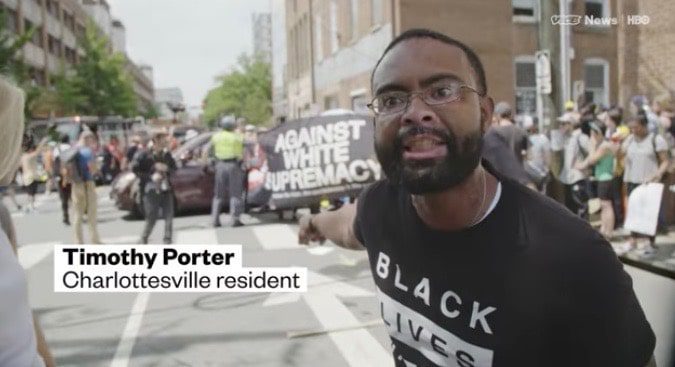 And I saw how his pain, his rage, his desperation reached depths that I have never experienced. He is emotionally bleeding for us all to see, because he has tried EVERYTHING and he is standing in the middle of a frickin’ race war. (I don’t want to say frickin’).

And I heard that right after Charlottesville, a FAMILY MEMBER who teaches about the Holocaust, had received a death threat from someone because they thought he was Jewish.

And then my writing sister who is black, said of her white colleagues, “don’t come to me with your fake tears and your prayers and your hugs. I can’t do it this week. This sh*t is not new. Charlottesville … is all of us. It’s killing us.”

She’s right. She’s right, and we don’t want to see it.

I remember feeling so proud when the Confederate flag came down, and one of my social work mentors (African-American) said, “I don’t care where they flag that ole rag. Taking it down don’t change nothing.”

Yeah, maybe I’m starting to get that now.

After the slaughter of the Emmanuel nine in Charleston, I participated in a workshop about combatting hate. I hoped it would help some of us heal. But when a HBCU professor projected a photograph of a Klan rally, it offended me. “We’re not all like that,” I wanted to scream, but that wasn’t her message. We’re not all like that, but the specter of those white pointed hats is there, is always there, and, like my wise friend said, it’s killing us.

According to the Southern Poverty Law Center, America has 276 armed militia groups, extremists like the gun-wielding pretend-soldiers in Charlottesville. 276. Let that number sink in.

I don’t want to be a racist, but I can never truly understand the black experience, no matter how hard I try to be an ally. And if I don’t want to be a part of the problem—via action or inaction—then I must confront and accept the ways I have been complicit in this mess. I don’t get to close my eyes to the ugliness that is around me.  I can vote for different leaders, march in rallies, carry signs, write blogs, and be a great social worker but none of that puts a dent in the crap storm we keep denying.

I’d love to end this with some hopeful message, something that makes you feel good about our potential (and about me).

So I’ll end with this. My eyes are open. I will fight to keep them open, even if what I see disturbs the hell out of me. And if you see me closing them, get in my face a remind me.

This is ALL OF US.

And we have to fix it.

Carla Damron, LISW-CP is a "retired" social worker and an award-winning fiction writer. Her latest novel, The Stone Necklace, the braided stories of five disparate people whose lives intersect at a tragic event, explores the many facets of grief and recovery. View all posts by Carla Damron