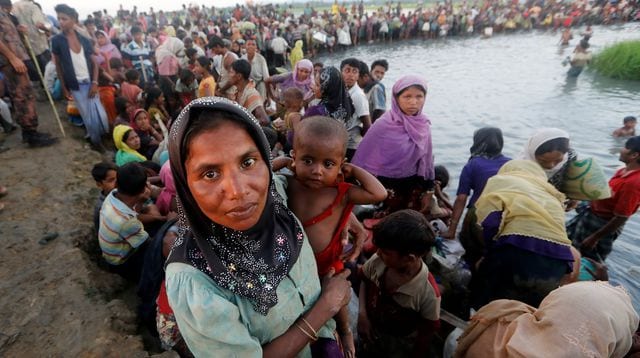 The brutal killings of Rohingyas have been confirmed by the international diaspora as being – “The Worlds most persecuted minority”. Rohingya progeny is found in Myanmar with the consistent brutal violence and forced fleeing which has become their daily existence.

A very minute spec of Humanity (The Rohingya`s) in the 21st century is in crisis and a strength of belonging to one`s land is transformed into a reality of statelessness. It’s a well directed ethnic cleansing, the level of hatred was and continues to such an extreme that Rohingyas hurriedly left their lands using the quickest available means of transport, mostly using water transportation, out of the fear of being persecuted in hopes of seeking shelter on whichever shore they reach. Despite being denied entry in many countries, they continue to float, as though living dead bodies would have done.

The very act of stamping down masses or crushing them is not limited to ethnic cleansing only, it`s a negative transformation injecting a lifelong fear, or memories of fear, hatred, and rejection from other nations, a destruction including emotional, physical and sociological. It`s a small term to call the Rohingya`s ethnic cleansing as genocide, it`s beyond the wordy jargons, something which humanity is witnessing in the 21st century – The Holocaust! The Renaissance of Killings!

“A Tale to be talked out or a Tale to be dusted in the coming years.”

The world needs to ponder, what are the paths that lead to the extremity of injected ethnic cleansing which violates almost all laws of human rights whether national or international, do question the level of insecurity any minority or small groups of tribes/masses undergo? What is the credibility that these lives will survive with dignity? The damage is done, though hope has not to be lost, human values are slowly dying a natural death, wonder the uncaptured inhuman phases the Rohingya`s are forced to live with?

There are innumerable talks on United Nations protocol, Laws which are ratified and not by Nations who want to help but find reasons to rejection or acceptance of its non-ratifications, security threats yes or no, but there is no one talking about, where do these group of neglected people go?  Who will repatriate them while guaranteeing security and safety and thereby normalising towards rehabilitation?

What does it mean to be a Rohingya?

Just one day to be a Rohingya can cost you to stand just nowhere, belonging to no one, with nothing at all to exist except a body which is better living then dead if escapes to any other land or for that matter even surviving for days in the sea ….and curse oneself to be born, living in highly impoverished conditions with  no health care access, and a life of  full of crippled mobility.

The case of Rohingyas is being dealt in a manner where a strategic displacement in shifting the identity from National identity to individual minority group with a stateless status, and it is this very depreciating transformation has been played well enough to plan a systematic exodus of the ethnic group and flush them out of the Nation just as the slag of any process.

“ Myanmar is going through self inflictment, injuring its own people, it is not that easy, it kills the reputation of a Nation globally, affects its economic growth and this ethnic cleansing has witnessed a history, a history which is not supposed to be repeated but to be repealed!!”

What can or can`t the Nations do, is not the struggling or comparative question, the responsibility is more on how can this mass exodus of Rohingyas be addressed by the neighbouring Nations and not stopped.  The reason of not stopping this exodus is clearly understood, since the history of Rohingya cleansing in Myanmar, dates back in 1970s, which is a proof of foment, displaying ethnic rifts and polarisation by using genocide as a tool to clean the cultural and religious species of Rohingyas.

“  Is Myanmar carrying  a Heritage of Horror for its next generation”

They are subjected to a systematic marginalisation and wherever they have migrated, they are living in sheer abysmal conditions after escaping the fear of persecution. Not that migration has given them any promising hopes for rehabilitation but the least it could benefit them is saving life and continuing the survival struggle. An exhumation of the Rohingya history will bring out how this ethnic group has been time and again subjected to violence, hatred, rejection, forced labour, imposed a legal stateless status, restricted freedom of movement and to be précises a 21st century Holocaust!

“Is it a fight of religion or a fight to displace people who are of no good (as considered by their own nation), for the Nations economy and residing at that terrain which is explorable for tapping rich natural resources?”