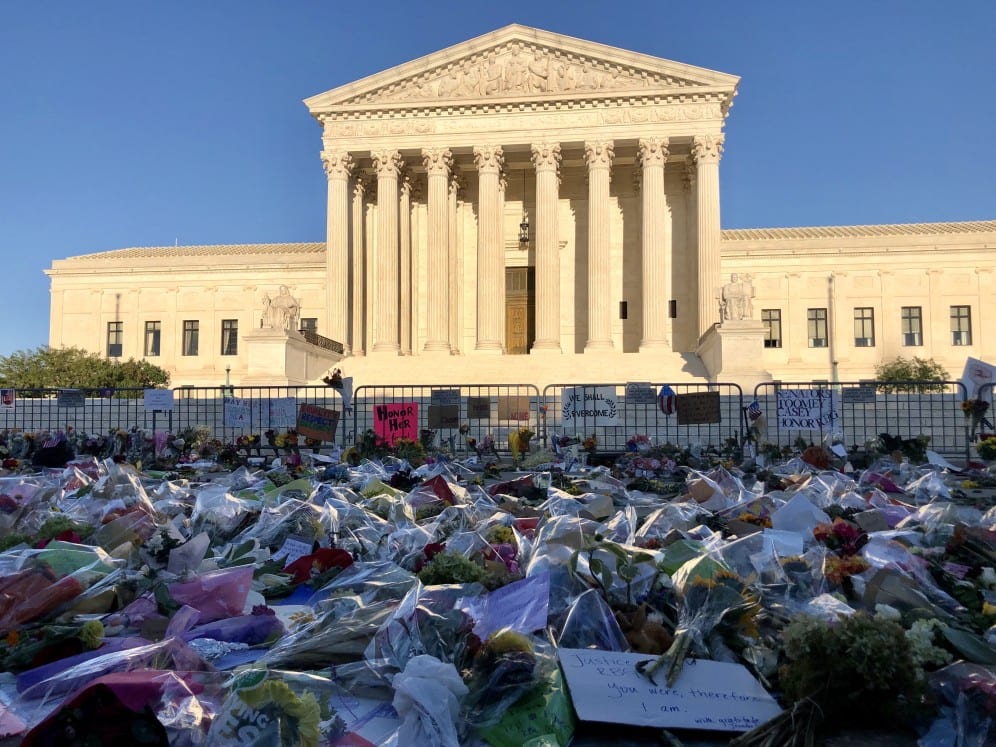 On October 7th, 2020, President Donald Trump went head to head against former Vice President Joe Biden, marking the beginning of the election season and the first debate of 2020. Amongst ongoing chaos, with COVID-19 and racial unrest, this election could make or break the season finale of a monumental year. During the debate, candidates discussed many of the key topics that are at stake during this election, including the open seat in the Supreme Court.

Following the death of Ruth Bader Ginsburg, a feminist icon who has paved the way for women, minorities, and the LGBTQ community since 1993, the Court requires a new member, and whether that takes place before or after this upcoming Presidential Election is up for debate. RBG’s final statement was delivered publicly, days before her passing, “My most fervent wish is that I not be replaced until a new president is installed.”

Breakdown of the Candidate’s Segments:

After nominating Amy Coney Barrett the weekend prior to the debate President Trump vouched for her on stage, stating, “I will tell you very simply; we won the election. Elections have consequences – we have the Senate, the White House, and we have a phenomenal nominee respected by all.” Trump asserted that his remaining months in the White House would allow him to appoint Associate Justice Barrett to the empty Supreme Court seat. In his short response, President Trump expressed that her position and academic background qualified her for the seat, and reasoned that if it were up to the Democratic party, they, too, would push to elect someone of their choice for the empty seat.

Vice President Joe Biden argued that Trump’s stance on this matter is unconstitutional, stating that the “American people have a say in who the Supreme Court nominee is. And that say occurs when they vote for United State Senators and for the President of the United States; they are not going to get that option now. The election has already started.  Tens of thousands have already voted and the thing that should happen- is that we wait. We wait and see what this outcome is.”  Vice President Biden expressed his fear that that the nominee for the Supreme Court, who has written against the Affordable Care Act (ACA) and deemed it unconstitutional, would place the ACA in jeopardy. He raised concerns about the impact this will have on women’s rights, those with pre-existing health conditions, and the overall reasonableness of healthcare expenses. Biden summarized his thoughts, stating that this matter should be decided on after the election in February of 2021.

Fact-Checking: What is True About Their Statements?

According to the Chicago Tribune, Amy Coney Barrett has not, as Biden claimed, stated that the Affordable Care Act is unconstitutional. Barrett has been vocal about her view of the ACA and the laws that upheld it in 2012, but she has not spoken out about whether or not is it constitutionally right within the law.

CNN reported Biden’s concerns about eliminating the ACA would leave approximately 20 million people from having access to affordable health insurance are true. While this appears to be true, and even more so during a global pandemic, the effect of various events of 2020 may have inflated this number. According to a study conducted by the Urban Institute in Washington, which calculated and measured the impact that changing the policy would have on Americans, 20 million people would be without insurance but CNBC reported in August that “up to 12 million Americans may have lost their employer-sponsored health insurance during the pandemic.”

A final point was brought by President Trump about his Supreme Court Nominee, stating that “some of her biggest endorsers are very liberal people.” For example, Barrett has been endorsed by Noah Feldman, a liberal law professor at Harvard as well as some support from former professors of Notre Dame. However, according to Inside Highered, these endorsements sparked a petition from faculty stating, “Many members of the faculty are strongly opposed to Amy Barrett’s nomination,” the letter said. “Many of us do not know her, but she seems to be a kind, decent, and intelligent person. However, we are strongly opposed to her views — as reflected in her writings, opinions, and dissents,” the letter said.

How Will This Impact Americans?

The Supreme Court will eventually be deciding on matters as impactful as the 1973 Roe V Wade decision, which granted women legal access to abortions. Not only does the future of the ACA lie in the hands of the Supreme Court, so do basic civil and human rights. If the ACA overturned, millions of Americans will be left abandoned in the middle of a pandemic with no replacement plan in place. The remaining options of either buying into another insurer with unreasonably heightened prices, or risking getting sick with the coronavirus with little to no support, would no doubt have massive negative impacts on Americans.

Overturning the ACA would also leave the elderly to struggle to pay for their prescriptions, as the ACA currently covers much of the expenses for seniors’ medications. This would also leave women at risk of experiencing gender-based discrimination from insurers who would charge women more than men on insurance coverage. This could lessen women’s job outlooks because businesses with company-covered insurance would view women as more expensive.

On top of impacting various vulnerable populations, America’s current recession may also be worsened if ACA is done away with. Pre-existing health conditions would once again not be covered, and preventative care will need to be paid out of pocket. Among the pandemic, Black, Latinx, and Native Americans are struggling more than ever with the systemic racism that hinders them from receiving care. If ACA is thrown out, this would leave people of color open for further discrimination by insurance companies to higher rates or denial of coverage.

The Supreme Court has recently made decisions on sex-based discrimination, religious discrimination, and immigration law. With justices’ life-long terms, this could impact the American people for decades. The current Supreme Court balance has five conservative justices and three liberals, so this next nominee could sway the Supreme Court vote to either side, and that will ultimately impact what is brought to the Supreme Court. With all of this in mind, it is imperative that Americans utilize their right to vote during the election.

Amy Comey Barrett was confirmed by the Senate on October 26th, and the Supreme Court will be voting on the constitutionality of the Affordable Care Act on November 10th, 2020.

Gracen Vandermeide is a staff writer for SWHelper and is earning her MSW through the University of Salisbury. Gracen enjoys spending time traveling and being with her pets. Gracen has worked with survivors of domestic violence and sexual assault. She enjoys supporting and advocating for those who do not have a voice and will continue to use her platform to do so.