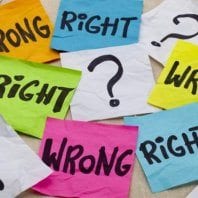 We all do it. See someone new and, within seconds, our brains start making up stories about them. Or we meet them, exchange a few words and before we know it, we’re filling in the gaps with our imaginations. The result? Assumptions.

I made an assumption recently, ironically right after running a workshop on accessibility and confidence for health staff. My colleagues Kylie and Sam, and I were about to get into the car when an elderly gentleman approached us.

“As always happens in hospitals,” he said, “I’m lost.”

We laughed. “We’re from Auckland,” we said (we were in rural New Zealand), “so we’re technically lost too! But we have a map of the hospital.”

“I’m looking for the rehabilitation centre.” His name, we ascertained later, was Arthur.

“That’s quite a way from here, but we’re heading that way,” said Kylie. “We’ll give you a lift if you’d like.”

Arthur gratefully accepted and, as he and I sat in the car while Kylie and Sam loaded my wheelchair, I quipped to him, “You’ve probably done you rehab for the day, walking around trying to find the place.”

Arthur muttered something but seemed a little bemused. I thought he may not have heard me.

On the way to the hospital’s main entrance, Arthur mentioned that he was there to visit his wife. Suddenly his bemusement made sense.

I had assumed he was there for rehab. Why? He was elderly, used a walking stick, had a limp and had said he was looking for the rehab centre.

In this case, no real harm was done — it was a fleeting encounter and our relationship and interaction weren’t professional in nature. Arthur probably thought I was a bit of a dick. But had things been different — say I was a medical professional — and I had acted on my assumption, poor old Arthur could have been whisked off for rehab.

So what could I have done differently to avoid the misunderstanding? Here are 5 things to limit the risk of making and acting on assumptions.

Noticing is linked to observing, but it involves being aware of — and separating — the meaning made by the observation. I observed Arthur’s age, stick, and limp. I went beyond noticing, though, by making meaning of those three observations — that he was receiving rehab — when he mentioned the rehabilitation centre.

Noticing without making meaning is important in avoiding assumptions.

What I failed to do was to doubt the meaning I had made. Doubt is a difficult balance — too much doubt renders us incapable of action, while not enough (or none) leaves us too sure and over-confident. Our cultural fear of being wrong can lead us to inaccurately believe we are right (see this TED Talk “On being wrong”).

Healthy doubt allows us to consider we may be wrong and feel ok about that.

Had I doubted the meaning I had made of Arthur’s reason for being at the hospital looking for the rehab centre, I could have asked Arthur a number of questions:

Why are you looking for the rehab centre?

Are you here for rehab?

What brings you to the hospital?

Questioning alleviates doubt. It also opens communication and allows you to gain insight into people’s stories.

The process of questioning allows us to recognise (“re-cognise” or “re-think”) our observations, meaning and insight into the person or situation. When I heard Arthur say he was visiting his wife, I recognised my error and that gave me the opportunity to correct my assumption.

Recognising the accuracy of the information we collect and create from people and situations helps us avoid acting on assumptions.

Unfortunately, in the two minutes between Arthur mentioning his wife and dropping him off at the hospital entrance, I didn’t have time to explain the mistaken meaning I had applied to his situation. In different circumstances, I could have said something like, “Oh your wife is in rehab? I’m sorry, I wrongly assumed it was you, which is why I made that dumb joke. My apologies.”

A response like that requires us to admit we were wrong. When we’re wrong, we think we’re right until we realise we’re not. There’s nothing we can do to undo it but we can apologise with humility and grace.

A response that is based on awareness and reflection is far more like to be useful and constructive than a reaction that hasn’t been fully thought through.

These five steps work in any situation where we are interacting with people. It’s especially useful when working in a professional role, providing customer service or working alongside colleagues. It’s also particularly helpful in situations of diversity, when there is something about the person with whom we are interacting that is new or unknown.

The process of noticing, doubting the meaning we’ve made, questioning to clarify our understanding, recognising the accuracy of our assumptions and then responding based on this information — even if it means admitting we’re wrong — is a discipline. It requires awareness, reflection, curiosity, humility and a commitment to relate to each other authentically and respectfully.

It also ensures our interactions are based on fact and shared understanding, not imagination and assumption.