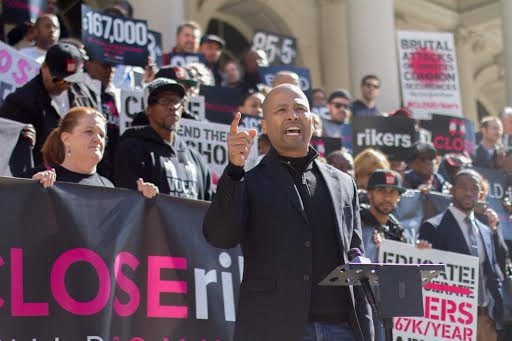 As a minor, Browder was arrested on suspicion of stealing a book bag and was sent to Rikers Island after his family could not afford to pay the $3000 bond as a condition for his release. Kalief Browder spent almost two years in solitary confinement at Rikers Island where he attempted suicide at least five times after being denied healthcare services.

In 2016, the #CloseRikers campaign lead by JustLeadershipUSA in partnership with many other organizations was created to “break the political gridlock and achieve real solutions that are guided by directly impacted communities”, according to its website.

The campaign called for:

When I first heard of the #CloseRikers campaign, I believed the campaign was a good idea in theory and would be effective in helping to raise awareness, but it seemed the jail complex was too massive to sustain any real change. My first thoughts were, “Is this a reasonable ask?”

This tweet opened a dialogue with Glenn E. Martin, the visionary leader, who believed in the impossible long before Mayor de Blasio backed the Rikers Island Commission’s recommendation to close the facility. I was reminded of when I first saw Glenn E. Martin which was during a livestream forum hosted on Twitter by the Columbia University Center for Justice back in early 2015 before periscope. During the forum, he said something to the effect that many people enter public service to change the system when in fact the system will change you long before you change it.

As someone who has worked in corrections at a Supermax, in law enforcement as a patrol officer, and in social work as a Child Protection Investigator, this statement really resonated with me. Although my heart is dedicated to serving others, I just could not conform to those environments which is why I created Social Work Helper. Now, I have the freedom to advocate, help create awareness and hold institutions accountable all of which has the tendency to get you fired in a public service job.

Glenn was gracious enough to grant me an interview to discuss his organization’s efforts to advance criminal justice reform, and you can read our conversation below:

SWH:  Tell us about your organization JustLeadershipUSA, and how you are using it to influence criminal justice reform.

GEM:  I spent six years in state prison and met some of this country’s best and brightest while I was there.  It taught me that, in criminal justice reform, those closest to the problem are closest to the solution but furthest from resources and power.

The people most harmed by mass incarceration are the people who can lead us out of that crisis, but only if we have a seat at decision-making tables.  That’s the principle on which I founded JLUSA.  Our bold goal is to cut the correctional population in half by 2030, and we have a three-pronged approach for accomplishing that.

SWH:  What do you believe are the major barriers and challenges preventing forward movement towards a more equitable criminal justice system?

GEM:  JLUSA believes that America’s most challenging barrier to expansive, systemic criminal and juvenile justice reform is the absence of clear and consistent leadership by those who have been directly affected by our failed criminal justice policies.  People who are directly impacted have big, bold ideas for changing the system that often are dismissed as unrealistic by traditional stakeholders.  That’s why the foundation of our organization is equipping formerly incarcerated people who are already leaders to access the power and resources necessary to make their ideas a reality.

SWH:  When you developed the #CLOSErikers campaign, what were your goals and expected outcomes?

GEM:  The #CLOSErikers campaign was developed with an ambitious goal of totally reimagining what criminal justice looks like in New York City.  Closing Rikers requires the City to reevaluate how each phase of its system operates: policing, setting bail, prosecution, sentencing, incarceration, and reentry.  Closing Rikers requires a significant reduction in the jail population of New York City.  And the shuttering of the penal colony is only one piece of the campaign.  The equally important part is to invest in and build the communities – poor black and brown neighborhoods – that have been devastated by Rikers Island for decades.

SWH:  What advice would you give to someone who dares to achieve the impossible?

GEM:  I’m proof of the talent that this country locks up and throws away every day.  There are thousands, if not millions, of people just like me who have the solutions to some of our most pressing issues but never get to have their voices heard.  My advice to other people like me is to hold onto what you know is right and don’t allow others to tell you that your ideas are impossible or unrealistic.  That’s what I was told when I first started talking about closing Rikers, but now it’s the official policy of New York City.  Build relationships with people who are willing to invest in you and your vision.

SWH:  How can our readers learn more about your projects and how to support them?

GEM:  Visit the JustLeadershipUSA website and the #CLOSErikers website for ways to get involved.  You can become a JLUSA member for only $1 per month ($12 per year), and there is an opportunity to donate memberships to people currently incarcerated.