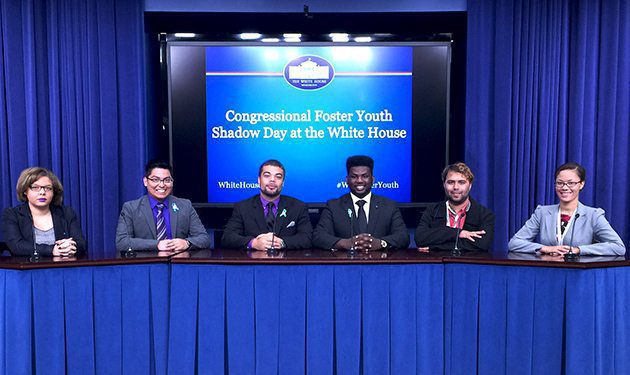 RIO GRANDE VALLEY, TEXAS – Carlie Patrick and Leroy Berrones Soto, students at The University of Texas Rio Grande Valley, returned from Washington, D.C., feeling they had contributed to improving and strengthening the child welfare system in the United States.

Patrick, a junior English/communication studies major, and Berrones Soto, a sophomore social work major, joined about 100 other students May 23 to May 26 for the 2016 Congressional Foster Youth Shadow Program, three days of education, advocacy and relationship building.

“It was an honor to be selected to represent Texas at the Shadow Program this year, and to share my story of what it was like growing up in foster care,” Berrones Soto said. “The way we change the system for the better is to let our elected officials know that we have solutions on how to make things better for millions of foster youths across the country.”

The annual program, now in its fifth year, is three full days of speakers, workshops, discussions and meetings designed to help young people learn about their Congressional representatives, their districts and how the U.S. Congress works. Current and former foster youths share their experiences with Congressional representatives, to help them gain a deeper grasp of the foster care experience and how they can improve policy.

“During a lively question and answer period, the representatives responded to our questions about child welfare policies and told us a little bit about themselves and how they got their jobs on the Hill,” Berrones Soto said. “After, there was a reception where we had dinner, then went into another theatre in the Capitol Visitor Center to see an episode of ‘The Fosters’ and continue talking policy and life-experiences with people who work in the child welfare arena.”

“We attended an interesting panel, held in the Eisenhower Executive Office Building, where people who work on Capitol Hill talked about how they got their jobs and became members of President Obama’s team,” Patrick said. “Among those on the panel was Rafael López,Commissioner of the Administration on Children, Youth and Families.

A highlight of the program was to meet and spend some time with an assigned Member of Congress and their staff. Patrick met with Congresswoman Eddie Bernice Johnson (D-TX 30th District) in the Rayburn Office Building.

“I actually ended up shadowing Robin Doody, Congresswoman Johnson’s press assistant and legislative correspondent,” Patrick said. “We discovered that we have lots in common. We are both from Houston, and we went to high school literally across the street from each other.”

Doody accompanied Patrick to a Congressional hearing on transportation of water supply and took her on a tour of the Rayburn Office Building and the maze of tunnels connecting the Capitol Hill buildings. He also attended the shadow luncheon with her, where the keynote speaker was Darryl McDaniels of Run-D.M.C.

Berrones Soto met with Congressman Brian Babin (R-TX 36th District) and his legislative aides Mary Moody and Stephen Janushkowsky. He shared his personal story in foster care, and they discussed ways to improve the child welfare system in Texas. Along with the aides, Berrones Soto attended a hearing of the House Committee on Transportation and Infrastructure.

Participants stayed in dormitories at The Catholic University of America, where some of the program activities and workshops took place. Going back and forth to Capitol Hill, they rode the DC Metro.

“This was my first time on a subway, and I loved riding the Metro,” Patrick said. “I liked it a lot better than the city buses I used to take in Houston.”

Also a subway first timer, Berrones Soto said riding the Metro was an “awesome experience” and he, too, became a subway fan.

“It was fast, clean and efficient,” he said, “though I think I was the only one holding onto the pole with both hands!”

Both Patrick and Berrones Soto said it was reassuring to hear from administration leaders on why advocacy by foster youth on the local, state and national levels is critical to affecting the decisions made by elected officials and policy leaders on their behalf.

By meeting other young people and alumni from across the country, leveraging their personal stories to create change, and educating federal policymakers about the experiences and perspectives of young people with personal experience in the foster care system, they feel they are helping move policy in a positive direction.

“Our voices and our stories matter, and I’m excited to have shared my experiences in Washington, D.C.,” Berrones Soto said. “I am extremely optimistic that after this great experience I will be able to continue advocating at a federal level to ensure my foster siblings have a more appropriate foster care experience.”

For more information on the Shadow Program and other programs that support, empower and engage foster youth, visit .