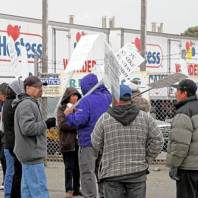 Yesterday, President Obama gave a speech on the continuing dilemma of the government shutdown which has been in effect since midnight October 1st, and he asked the question, ” What would happen if you decided to shut down your job while you develop a list of demands to be met”? Before, I give the President’s answer, lets look at the past to see if  any such occurrence have happened and what was the outcome.

In November 2012,  Hostess Brands announced that they were selling their company to the highest bidder as a result of a strike by union workers. Hostess fired 18,500 employees because less than 5,000 employees went on strike. According to CNN Money, the company stated:

“We deeply regret the necessity of today’s decision, but we do not have the financial resources to weather an extended nationwide strike,” said CEO Gregory Rayburn in a statement.

Hostess will move to sell its assets to the highest bidder. That could mean new life for some of its most popular products, which could be scooped up at auction and attached to products from other companies.”

Teamsters and unionize workers were blamed for causing the shutdown of a company who products lives in the childhood memories of so many. What could their demands have possible been to cause a company shutdown? According to the president of the Bakery, Confectionery, Tobacco Workers and Grain Millers (BCTGM), Frank Hurt said:

BCTGM says the company has ceased making contractually obligated payments to the Hostess workers’ pensions since July 2011 and has pocketed approximately $160 million—money earned by and owed to its dedicated workforce.

Hostess Brands is in bankruptcy for the second time in eight years. Since the first bankruptcy in 2004, BCTGM members across the country have taken dramatic wage and benefit concessions and watched as 21 Hostess plants were shut down and thousands of jobs were lost. At the time of the first bankruptcy, Hostess workers were assured by management that money saved via concessions and plant closings would help make the company stronger, more vibrant and more competitive. Read more

The President’s short answer to the his question is “You will get Fired”!  Take a look at this three-minute video of President Obama’s assessment of the government shutdown by House Republicans:

Currently, House Republicans are on a network messaging frenzy about how the White House and Democrats are not compromising or willing to negotiate with them. Originally, the shutdown was over defunding or delaying implementation of the Affordable Care Act which went into the full implementation phase also on October 1st.

Republican talking points since 2009 when Affordable Care Act was still a bill made claims that Obamacare would cause death panels, increase insurance premiums, and health care cost.  A 2013 article from Forbes Magazine tells a different story of how the enactment of Obamacare has driven down cost the last four years in a row.

While the new data suggests that some of the changes in how providers are paid for delivering healthcare began—and were having a positive impact—prior to passage of Obamacare, the ACA codifies these changes in payment procedures for physicians and hospitals, taking what now appears to be programs that are slowing the growth in costs and applying them to all providers throughout the nation. Read Full Article

Now, House Republicans are stating the other side is not willing to sit down and negotiate even more cuts to entitlement programs and government spending in addition to cuts already put in place by sequestration. Republicans have successfully eliminated people from talking about the strain caused by sequestration cuts. Additionally, they have gotten Democrats to accept and willing to sign a continuing resolution with current sequestration cuts as part of the deal. The effects of sequestration cuts have not yet been fully realized which will have devastating effects of their own in the upcoming months without any additional cuts being made. According to the LATimes:

As we reported in August, sequestration will pare as much as 1.2% off gross domestic product — after inflation — through this year and next, according to the Congressional Budget Office.  It will cost as many as 1.6 million jobs over that time frame, the CBO says.

Just as the government shutdown leaves congressional pay and benefits intact, so does the sequester. The damage is all done at the opposite end of the economic scale. Thousands of low-income residents of public housing will be thrown out of their homes. Public housing authorities that managed to stave off evictions this year say they will be out of options next year, when the cuts go deeper.

Tens of thousands of 3- and 4-year-olds will be barred from Head Start, perpetuating the vicious cycle of poverty and poor educational attainment faced by those families. Unemployment benefits will continue to be cut by an average of 15% nationwide. And of course job growth will be worse because of the sequester. That’s a great one-two punch Congress has landed on the jobless. Yet the best we can hope for is that the sequester continues, and doesn’t get worse.  Read Full Article

I have heard arguments that both Democrats and Republicans are responsible for the government shutdown, and I completely disagree. You can’t negotiate with people who put their self-interest over the needs of the majority. The decisions and demands being made by House Republicans and their leadership is irresponsible. Not only will it cost economic hardship for many children and families, some people will lose their lives as a result.

Also on yesterday, two United States Capital Police were hurt protecting tourists who were visiting our Capital. They left their families and came to work on furlough not knowing whether they would eventually get paid or not. They have the same worries as everyone else like mortgages, food, student loans, and taking care of their children. According to sources, a woman suffering from postpartum depression went on a tear in our nation’s capital with her one year old child. To read more on this developing story, view this link.

What else do Republicans want in order to end this insanity?