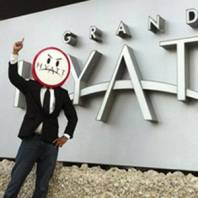 A controversy has been brewing within the social work community, and the Society for Social Work Researchers (SSWR) have found themselves at the center of it. In January 2014, SSWR will be having their 18th annual conference which will be held at Hyatt Hotels in San Antonio, Texas. Over the past few years, Hyatt Hotels have continued to be boycotted globally as result of worker’s rights violations and labor disputes involving their treatment of hotel service employees. On October 3rd 2014, a Change.org petition was created urging Jeanne Marsh, President of the Society for Social Work Researchers, and its board to reconsider having their annual conference with Hyatt Hotels.

In just a two week period, the petition received over 500 signatures from people all over the world while simultaneously creating a buzz on various social media outlets. After receiving emails from social workers expressing their concerns, I decided to reach out to the Society for Social Work Research, the labor union Unite Here, and Shane Brady the originator of the Change.org petition. The first person I interviewed was Dr. Jeanne C. Marsh who is the President of the Society for Social Work Research as well as Director of the Center for Health Administration Studies at the University of Chicago.

Unfortunately, this is not the first time the Society for Social Work Research has found itself in the middle of a boycott dispute. In 2000, the SSWR annual conference was being held in Charleston, South Carolina which was also under economic sanctions by the NAACP due to the State’s choice to fly the confederate flag over the Capitol Building. According to an article written by former SWWR President Allen Rubin, he reflected on the precisive measures taken by the organization in dealing with the circumstance before them which included:

3. We offered a free conference exhibit booth to the NAACP, and they accepted our offer.

4. The NAACP is developing a data bank of information on individuals who cancel vacations planned for South Carolina.We asked all conference participants who were planning such vacations to cancel them and let the NAACP know about the cancellations for their data bank.

5. A featured speaker at our conference banquet was the Reverend Joseph Darby, vice president of the South Carolina Conference of Branches of the NAACP and chairman of the South Carolina Coalition of Black Church Leaders. Reverend Darby delivered an informative and stirring talk about the issue of the Confederate battle flag and received a standing ovation. Read Full Article

However, the current policy makers with SSWR have decided not to use the model created by their predecessors. Instead, they have chosen to handle the current issue differently.

SWH: How long has the SSWR Board known about the  Hyatt Hotels Corporation and UNITE HERE?

Jeanne: The current SSWR Board learned about the situation when we were contacted by UNITE HERE around February/March 2013. Since that time, the Board has been actively involved in monitoring the evolving situation in San Antonio and communicating with SSWR members about it.  (See attached communications to SSWR members.)

SWH: What is the specific nature of the recent agreements reached between Hyatt Hotels Corporation and UNITE HERE?

Jeanne: On July 1, 2013 Hyatt Hotels Corporation and UNITE HERE issued a joint press release (see attached press release) which “announced a national agreement that resolves longstanding disputes between the two organizations.”  The agreement addresses the settlement and ratification of union contracts by Hyatt associates at specific hotels in San Francisco, Honolulu, Los Angeles, and Chicago.  Once approved, the contracts will provide retroactive wage increases and maintain quality health care and pension benefits.  The contracts would be retroactive from 2009 and be in effect into 2018.  Upon ratification of the union contracts, UNITE HERE will end its global boycott of Hyatt.

A part of the agreement is to establish a fair process, which includes a mechanism for employees at a number of Hyatt hotels currently without union contracts to vote on whether they wish to be represented by UNITE HERE. At this time the Grand Hyatt San Antonio is not unionized and there are no contract negotiations that we are aware of between Hyatt Hotels and UNITE HERE at this property.

SWH: What are implications of the agreement for labor/management relations at Grand Hyatt San Antonio?

Since the end to the global boycott of Hyatt, UNITE HERE in San Antonio has maintained a local boycott at the Grand Hyatt San Antonio and other non-unionized properties and continues to actively organize.

SWH: What are the implications for SSWR 2014 conference to be held at Grand Hyatt San Antonio?

SWH: How is SSWR responding to the labor/management relations at the Grand Hyatt San Antonio?

Jeanne: The SSWR Board is moving proactively in three directions:

(1)  Understanding that the situation with UniteHere and the Grand Hyatt San Antonio is evolving, the SSWR Board will continue to work hard to gather and communicate with members and non-members the most up-to-date information about the situation.

(2)  The Society books its hotels approximately four years in advance. We currently have contracts signed with the Marriott in New Orleans for 2015, the Marriott inWashington, DC for 2016 and the Marriott in San Francisco for 2017.  All hotel contracts are currently under review by the SSWR attorney to ensure terms are consistent with SSWR policy related to avoiding contracts with hotels engaged in current or pending labor disputes.

(3)  A special session is planned at the SSWR 2014 meeting for the SSWR Board to discuss with SSWR members the current status of the situation, the complexities of the issues, and to hear members’ concerns.

For more information, SSWR members have been encouraged to contact the UNITE HER representative , Rachel Melendes, at 210-2242-1520 and with Managing Director of the Grand Hyatt San Antonio, Toom Netting at 210-451-6501.

A copy of the statement issued to SSWR members outlining the above can be viewed here. Also, I was provided with a joint press release by Hyatt Hotels and Unite Here announcing a tentative plan to end the boycott against Hyatt Hotels which can be viewed using this link.

As you can tell from the picture above, faith based organizations and community leaders have been very active in the boycott against Hyatt Hotels. They have complied a report outlining the working conditions at Hyatt Hotels which can be viewed below:

I reached out to Unite Here and requested a status update regarding the boycott of the San Antonio Hyatt Hotel location. I received a response from Rachel Mendes of Unite Here stating,

The boycotts of the Grand Hyatt and Hyatt Regency in San Antonio are continuing, and new boycotts may be called at additional Hyatt properties. Workers at these two properties are asking people to honor the boycott and not eat, sleep, or meet at these hotels, and move events to a venue not in a labor dispute.

This agreement has shown us that when workers and allies stand together, we can move forward and win justice and respect on the job. As an organization of social workers, SSWR needs to do the right thing for the San Antonio workers and community by honoring the boycott until workers here are treated with the justice and respect they deserve. 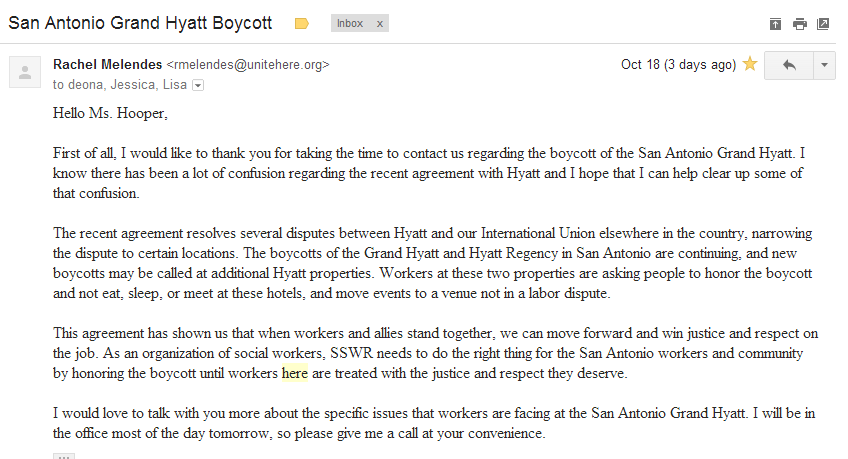 After speaking with Dr. Marsh, I had the opportunity to interview Dr. Shane Brady, the originator of the Change.org petition, who is also an adjunct professor with the social work department at the University of Michigan. Dr. Brady was an invited presenter at the 2014 annual conference, but he has chosen to decline as a result of these issues. He is also a first generation Phd graduate with roots as a community organizer focusing on social justice and LGBT issues.

In the petition, Dr. Brady acknowledges the contractual obligation SSWR has with Hyatt Hotels, but he raises some important additional concerns. He states,

The Society of Social Work Research Conference has a contractual obligation to hold the 2014 conference at Hyatt Hotels, despite the injustices experienced by workers of the San Antonio Grand Hyatt. It is the stance of UNITE HERE, the hospitality workers of the Grand Hyatt of San Antonio, and a group of us within social work and similarly allied professions that it is unethical to hold the SSWR conference as planned at the expense of perpetuating the injustices experienced by Hyatt workers by giving our business to Hyatt Hotels. Please sign this petition and send a message to SSWR leadership to cancel this year’s conference, change venues, or push the leadership of Hyatt Hotels in San Antonio harder to do the right thing by workers. In the words of Paulo Freire, “Washing one’s hands of the conflict between the powerful and the powerless means to side with the powerful, not to be neutral.”  Sign the Petition

Dr. Brady stated that he has spoken with many of his colleagues who have expressed their empathy for the workers, but stated they did not want to get involved. What does this mean if social work professors and leaders within the social work community feel no obligation to advocate on behalf of vulnerable populations? In doing my due diligence, I had some additional concerns that I needed to ask Dr. Marsh about.

SWH: Being that the organization has dealt with a similar situation in the past, why not use the same strategy?

Jeanne: The SSWR Board recognizes that many social work (and other) organizations have encountered similar issues when planning conferences. In order to learn from these experiences and draw on the significant expertise in the social work field, the SSWR Board has developed a Leadership Panel for the SSWR 2014 conference with representatives from major social work organizations including the Council on Social Work Education, the Group for the Advancement of Doctoral Education, the National Association of Deans and Directors of Social Work, the American Academy for Social Work and Social Welfare.  The Chair is University of Washington Social Work Professor Nancy Hooyman who was SSWR President when the SSWR Conference was held in South Carolina** during the period the state was flying the Confederate flag.  The charge to the group in the short term is to provide the Board with their recommendations of actions we can take to address the situation.  In the long term, the group will reflect on strategies all social work organizations can consider in avoiding and addressing similar situations in the future.

SWH: Was there an attempt to negotiate with Hyatt to release SSWR from its contract?

SWH: The Chairman of Hyatt Hotels Corporation sits on the Board of Trustees for your University, is this a factor in preventing the organization from using the same plan of action when it encountered a similar situation in the past with the NAACP?

Jeanne: The University of Chicago has a strong tradition of academic freedom where faculty pursue their work without outside interference or influence including from Trustees of the University.  I am aware that Mr. Pritzker is a University of Chicago Trustee, but I have had no contact with him. It also is my understanding that the Pritzker family no longer owns Hyatt Hotels as a result of a breaking up Pritzker family holdings a couple of years ago.

I tried my best to represent the point of view of each party involved. Now, I am interested in your point of view. Do you feel SSWR is properly handling this matter or do you feel more could be done? Please, leave you comment on this page, so others outside of the social work community can add to the conversation. Is having an internal conversation with other social work researchers at the annual conference enough?

Photo Credits: Courtesy of Dignity at Work and Hyatthurts.org