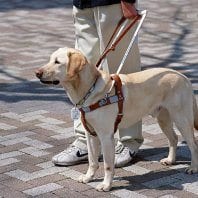 In Mooresville, North Carolina, a disabled veteran was denied service at a restaurant because of his service dog.  Benjamin Wardrid, a veteran who served in the Iraq War, experienced his first taste of discrimination as someone with a disability who uses a service animal.  Wardrid was diagnosed with post-traumatic stress disorder, or PTSD, upon returning home from serving in the U.S. Army.  Beau, Wardrid’s service dog, assists in ameliorating the symptoms of PTSD Wardrid may experience in his day-to-day life. 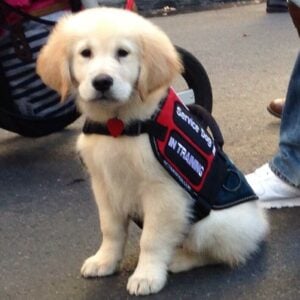 Last Wednesday, Wardrid was prevented from being served at a local restaurant while on a family outing because he had his service dog with him.  Wardrid knew that his rights had been violated, and he and Beau returned to the restaurant the following day accompanied by two police officers.  During the second visit, Wardrid and Beau were finally allowed in, and Wardrid was served.  The owner of the restaurant provided an off-camera statement that he has had “bad experiences” with service animals in the past.

The Americans with Disabilities Act (ADA) clearly outlines privately-own businesses’ responsibilities that serve the general population when it comes to service animals:

Privately owned businesses that serve the public, such as restaurants, hotels, retail stores, taxicabs, theaters, concert halls, and sports facilities, are prohibited from discriminating against individuals with disabilities.

The ADA requires these businesses to allow people with disabilities to bring their service animals onto business premises in whatever areas customers are generally allowed.

The ADA defines a service animal as:

(Excerpt from the ADA’s Commonly Asked Questions about Service Animals in Places of Business webpage.)

When this story was brought to my attention, I was shocked at the lackluster excuse the owner of the restaurant provided regarding his refusal to serve Wardrid.  Dogs who provide such services undergo vigorous selection and training processes; dogs with an aggressive temperament or demeanor are not selected to serve in this manner.  In my experience, the service dogs I have come into contact with were very calm and friendly when they were “off,” and attentive to their owner’s needs when “working.”

Regardless of the restaurant owner’s previous encounters with service animals, Wardrid should not have been denied because he had a service dog.  Any hesitations the owner may have had could have been resolved in a different manner; for instance, he could have brought his concerns to Wardrid’s attention, and an alternate seating arrangement could have been chosen.  Or Wardrid could have eased the owner’s concerns by discussing Beau’s demeanor, and how he would not be disruptive.

The ignorance or “fear” displayed by the owner is disturbing because it makes me, and possibly others who hear this story, wonder how many other “Wardrids and Beaus” were denied at this restaurant before this incident made news.  I also wonder about the treatment of people with disabilities at this restaurant; do people with disabilities feel welcomed, or is there an air of hostility that exists?

Have any of you witnessed discrimination against those who used service animals at public venues?  Have you been the victim of such discriminatory acts?  If so, how did you react, and what was the outcome?  I would like to have the opportunity to learn of your experiences and responses surrounding this matter.