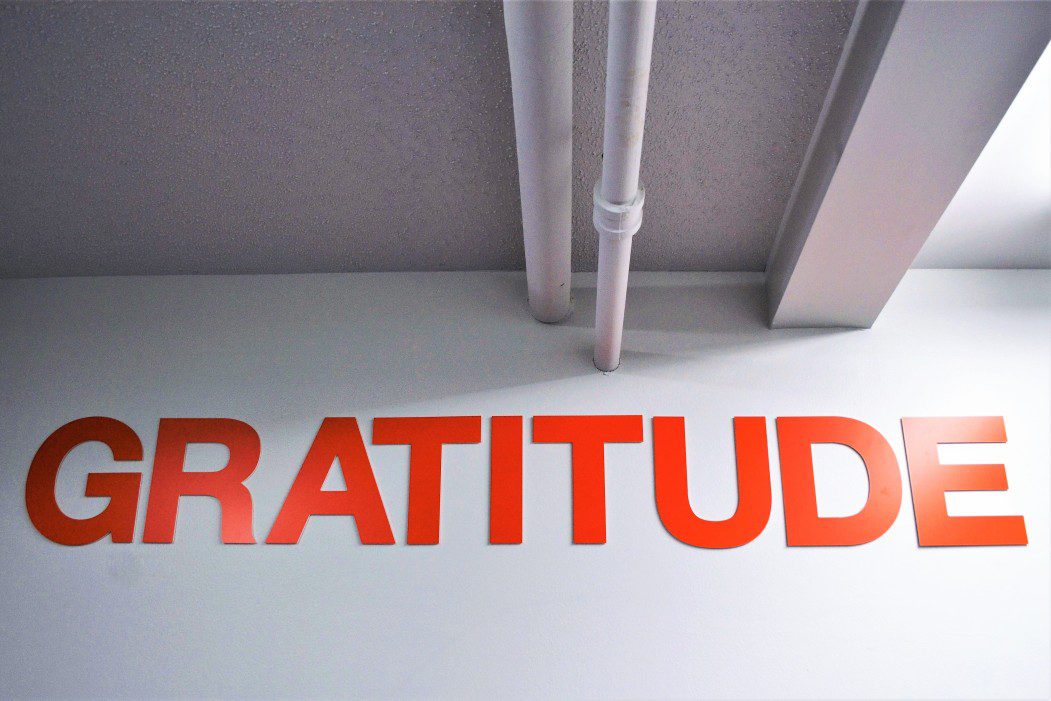 As we give thanks at the holidays, it’s easy to overlook someone important: your past self.

“Despite the fact that past gratitude is self-focused, it reminds people that they’re part of a bigger story and that they have the power to grow,” Baldwin said. “It’s possible this promotes a pay-it-forward type of mentality.”

Gratitude is what psychologists call a self-transcendent emotion, one that lifts us out of the everyday and expands our perspective, which can help us get along with each other better. In a recent experiment, Baldwin and Zaw asked participants to write brief gratitude letters. The first group thanked someone else, the second thanked themselves, while a third, the control condition, wrote about a positive experience they’d had. Zaw and Baldwin then surveyed the participants about their self-perception after writing the letter. Although the results are not yet published, early analysis shows that the exercise gave the other- and self-focused gratitude groups a sense of redemption and helped them feel they were morally good people. However, the group that wrote to themselves scored higher on both measures.

The past-self group also saw a benefit the others didn’t: an increase in the self-awareness measures of clarity, authenticity and connectedness.

“Unlike gratitude toward others, being appreciative of ourselves carries an added benefit of truly understanding who we are and feeling connected to ourselves,” said Zaw, a McNair Scholar who has been working with Baldwin since her freshman year as part of UF’s Emerging Scholars Program.

Zaw and Baldwin’s research — the first known data gathered on past-self gratitude — was inspired by a Reese’s cup. When Baldwin’s co-worker, boredom researcher Erin Westgate, returned to the office after pandemic lockdown, she was delighted to discover a peanut butter cup she had squirreled away in her desk.

“She texted me like, ‘Oh my gosh, my past self left my future self a Reese’s,’” Baldwin recalled. “I was like, ‘Wait a second. You’re expressing gratitude towards something your past self had done. We have to study this.’”

As Zaw and Baldwin dug into previous studies, they found plenty on gratitude toward others and a few on self-compassion, but nothing on past-self gratitude. They designed the letter-writing experiment to test its effects, presenting their findings at the Society of Southeastern Social Psychologists in October and at the upcoming meeting of the Society for Personality and Social Psychology in February.

If you’re curious about the benefits of self-gratitude, Zaw offered a way to try the experiment at home, maybe as a new Thanksgiving tradition. Take a few minutes to write a thank you message to someone else, and another to yourself for something you did in the past. Sharing what you wrote could foster connections between loved ones, she said, but the exercise can also pay dividends if you try it on your own.

“At Thanksgiving and Christmas, we focus on other people, but self-care is really needed too, especially if we want to feel more clear about ourselves,” she said. “Maybe it can even lead to a better vision for ourselves for the next year.”