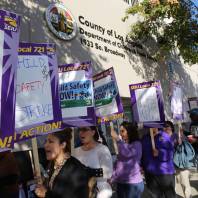 For social workers with the Los Angeles Department of Children and Family Services (DCFS), Friday marked their second day on the picket line with no progress being reported towards reaching an agreement with the County. Social Workers initiated the strike due to low pay and high caseloads which prevents them from properly investigating reports of abuse, neglect, and dependency as well as providing other emergency services. The strike is being led by Bob Schoonover, president, of the local Services Employees International Union (SEIU) 721 which represents approximately 3,500 social workers.

As a former child welfare investigator, I fully support the efforts of the L.A. social worker’s strike, and I hope it will help elevate the plight of public sector social workers from their current invisible status. As a result of the Great Recession and self-imposed austerity measures from all levels of government, public sector social workers have silently shouldered the burden of responding to the increased need for services despite having resources and manpower levels less than they were before the recession.

Public Sector social workers lack the national lobbying power of teachers, law enforcement, fire fighters, and nurses which often leaves us out of any legislation protecting educators and first responders from cuts. Social Services agencies are also not required to maintain any accreditation standards like schools, hospitals, and police departments which means administrators and government officials are unregulated in their policy making. In this case, if the union is unsuccessful in negotiating reduced caseloads for the workers, there is no other body of government to seek redress.

The federal government only monitors outcomes and whether a social worker completes cases within the allotted time frames. It does not take into consideration how many cases the social worker has on his/her caseload. Every day, social workers are forced to maneuver a broken system while trying to restore hope to children and families in need of help, but what happens when the social worker’s hope is gone?

Social workers and other key stakeholders who have taken an interest in the LA social workers strike have been quite vocal in either their support or opposition. According to a post from a social work forum against the strike, Annette Mahoney-Cross an administrator with a New York Child Welfare agency stated,

“So I have to comment on the strike of public child welfare workers in LA. I finally had time to read articles from other media outlets and I cannot support this work action. I am an administrator at one of the largest public child welfare agencies in the country in a suburb of New York City. I am also a union leader who sits on the board of directors of my union.

In NY public employees are prohibited from striking as per the Taylor Law, with good valid reason. There appear to have been other options available to staff and in fact two union delegates stepped down because they felt intimidated by union officials, Yes it is abundantly clear they more staff need to be hired, but why has the union not directed a work action before a full on strike? Workers refuse new cases, get written up and then use the grievance process. Involve the Child Welfare League of America to discuss recommended caseloads? These are only a few options which could have been explored, but SEIU does seem to like to strike first to try to force management’s hand. Sadly the only ones to suffer will be the families.” via Facebook

In my opinion, I believe the above stated view is limited in its thought process while failing to take into consideration the larger picture. In this country, Red states have the highest poverty rates, reliance on social welfare programs, and the poorest outcomes for children living in America, and social workers in these states are barred from unionizing as a result of Right to Work legislation. By continuing with the strike, LA social workers are not only exposing systems failures preventing social workers from providing quality care to children and families, but they have the ability to become the voice for other social workers who have been silenced.

Despite outcries of opposition, support appears to be growing for the social workers’ strike and is evidenced by the comments on the SEIU Local 721 Facebook Fanpage. You can also stay up to date with SEIU 721 on Twitter @seiu721using the hashtag #721strike.