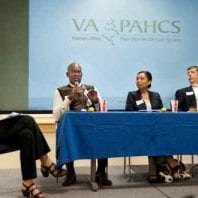 Ensuring the mental health of Americans is a costly affair. Three recent unrelated occurrences should help us realize there is no inexpensive way to prevent, diagnose and treat mental illness. By now most of us have heard about the “broken” Veterans Administration and its failure to provide timely services that has led premature deaths of veterans. Newspapers, broadcast media and numerous blogs have reported about various calls for the resignation of VA Department Secretary Eric Shinseki following a few damaging reports about unacceptable medical practices involving veterans—particularly the report out of Phoenix that veterans were dying after secret waiting lists were discovered falsifying wait times for treatment.

While the focus of the VA investigation has been on medical services, many of the veterans who are not receiving timely treatment are suffering from post-traumatic stress disorder (PTSD) and other brain injuries because the VA simply was not prepared for the huge numbers of soldiers returning from deployments with serious mental health issues. Approximately 2.6 million soldiers were deployed in Afghanistan and Iraq and it is estimated that 20 percent of returning veterans have screened positively for PTSD and depression. The VA estimates as many as 22 veterans commit suicide every day.

So far, President Obama is standing by Shinseki but finds himself faced with another crisis that questions his ability to lead. Unfortunately, there are few topics too sacrosanct not to politicize. But the woes of the VA go farther back than the Obama Administration. The VA budget has been increased significantly over the years even during the sequestration. However, as battlefield medical advances save more soldiers’ lives, they are returning with more complex problems that are quite expensive to treat.

The Veterans Affairs fiasco comes on the heels of the rejection of the National Football League’s offer of $765 million to settle lawsuits by 4,878 former NFL players (and 1,000 family members) who suffered concussions during their careers. U.S. District Judge Anita Brody rejected the settlement reached by the NFL with its former players because she was concerned that the settlement was not sufficient to cover the needs of the claimants. The lawsuit was sparked by the discovery of the degenerative brain disease, chronic traumatic encephalopathy (CTE) in the brain of the late Pittsburgh Steelers center, Mike Webster who died in 2002 at the age of 50 years old. That story was the subject of a Frontline documentary, League of Denial: The NFL’s Concussion Crisis.

Subsequent to the concussion lawsuit, 500 players have filed another lawsuit accusing the NFL of obtaining and administering illegal drugs in an effort to mask the pain and symptoms of various injuries such as broken legs and ankles. Turning a blind eye and even denying the traumatic brain injuries (TBI) suffered by NFL players resulted in incalculable costs to families and children. The NFL has taken dramatic steps to reduce the chance of TBIs but concussions are still a staple of a very violent game.

The third occurrence—another mass killing—in Santa Barbara, California, happened Friday night when Elliot Rodger, the 22-year-old son of Hunger Games assistant director Peter Rodger went on a hate-filled rampage, killing six and injuring 13 others before shooting himself. More human life destroyed by someone who obviously should not have been able to purchase guns. Yet Congress consistently fails to pass laws requiring stricter background checks despite the fact that 90 percent of Americans favor stricter background checks. The last serious attempt to pass a gun sale background bill, S.22—the Gun Show Background Check of 2013—failed last year when five skittish Democrats voted against a bill offered by West Virginia Democrat Joe Manchin and Pennsylvania Republican Pat Toomey. The National Rifle Association has ensured that no gun control law gets passed by holding many of our nation’s lawmakers hostage.

There is no way to address mental health on the cheap. Failure to provide adequate resources for prevention, screening and treatment often come with a heavy price. Threats to mental wellbeing will increase as we become more socially isolated, consumed and fixated on our device of choice. We no longer have to leave home to bowl alone.

Photo Credit: Courtesy of US Dept. of Veteran Affairs 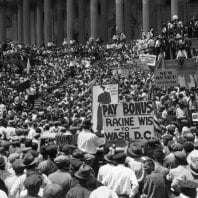 Throughout the series, I have taken you back to Washington D.C. during the Great Depression, alongside 25,000-45,000 WWI veterans protesting and lobbying for their Bonus checks that would help get them out of poverty. I analyzed two key tensions, Micro vs. Macro and Public vs. Private, in order to show you how they have had a dramatic impact on the way our country treats those who fight her wars. Now, I will tie everything together and demonstrate how these historical lessons can help us better serve our veterans today.

Similar to the Bonus Expeditionary Force (B.E.F.) veterans of 1932, modern U.S. military veterans are issuing grievances to the U.S. government, and anyone who will listen, over issues related to compensation. 82 years after the B.E.F., popularized as the Bonus Army, occupied our nation’s capital, 550,000 veterans who fought in Iraq and Afghanistan are waiting on average between 273- 327 days for their disability compensation claims to go through, often at the expense of their physical and mental health. While recognizing the U.S. government has made much progress since the time of the B.E.F., it is apparent that work still needs to be done.

Although society has widely accepted public assistance as a need for U.S. military veterans, there are hundreds of private agencies that still exist to serve the needs of the same veterans that the U.S. Department of Veterans Affairs (VA) serves, or aims to serve. This would suggest that the services provided by the public, federal government, are not adequately meeting the needs of U.S. military veterans. One must only consider the average wait on the VA’s disability claim back log mentioned previously to see the VA is not prepared to handle the rising needs of U.S. veterans.

While there is observable Public vs. Private tension among services provided to veterans, a question can also be asked in consideration of this tension: Does the U.S. government view the issues that military veterans face as being personal/private problems, or does it acknowledge that these are public issues brought upon individual veterans as a result of their time in military service? This question may be a topic for further investigation. While we can still observe Public vs. Private tension occurring among modern U.S. veterans and the U.S. government’s approach to serving them, we can see Micro vs. Macro tensions as well.

Through an analysis of all the services the VA provides U.S. military veterans, it is apparent that the VA takes a micro level approach, treating every veteran on a case by case basis, rather than having a focus on macro level systems to address environmental factors that might contribute to adequate care.  We’ll see why this matters to society in a minute, but why does this matter to the field social work? Social work has been an integral part of veteran services provided by the U.S. government since 1929 and the VA is now affiliated with over 180 Graduate Schools of Social Work, training about 900 students per year. VA Social Work demonstrates its micro level focus in its mission statement which reads “The mission of VA Social Work is to maximize health and well being, through the use of psychosocial interventions for Veterans, Families and Caregivers” (2013). Psychosocial interventions aren’t necessarily the wrong approach, but it is near the foundation of micro level practice.

U.S. veterans, veteran service organizations, and even social workers within the VA, might benefit from following the social work trend and adopting or including a macro level approach to address modern day issues. After all, this series has shown that macro level approaches are historically the most effective at creating positive change and building security and autonomy for a group of disadvantaged individuals. It is through this intersection that the most profound implications of this series can be drawn.

In order to adequately address the needs of U.S. veterans, more work needs to be done at the macro level. Whether this manifests through the VA adopting new practices like creating a program with the sole focus of macro systems, social workers advocating and lobbying for macro changes in public policy, or veterans themselves recreating a physical effort at the scale of the Bonus Army in 1932; a macro approach larger than anything currently present must occur for the veteran population’s needs to be adequately addressed.

If U.S. veterans from around the country arrived en mass at Washington D.C. demanding legislation to end the VA backlog, support alternative healthcare measures within the VA, and to protect veterans benefits from any future government shutdowns or policy changes (three primary, widespread issues noted by the author); then modern U.S. veterans would be able to carry on the legacy that the Bonus Expeditionary Force left behind. Such an effort would require something that we don’t see very often: the participation and collaboration of the Veterans of Foreign Wars, American Legion, Disabled American Veterans, Iraq and Afghanistan Veterans of America, and the dozens of other national agencies that work with and for U.S. veterans. After all, collaboration among large veteran organizations was what finally led to the passage of a Bonus Bill in 1936.

I will conclude by saying this is not just an issue for U.S. veterans, it is an issue for society as a whole and in particular, social workers. Especially social workers who work within the U.S. Department of Veterans Affairs. Every U.S. citizen has benefited from the passage of the Bonus Bill and the GI Bill that followed; evident in the rise of the middle class during the 1950’s from millions of veterans going to college and buying homes. When U.S. veterans are adequately cared for, everyone wins. If social workers are called to “draw on their knowledge, values, and skills to help people in need and to address social problems” (National Association of Social Workers Code of Ethics, 2013), then social workers should not only help carry on the B.E.F. legacy, they should be using their knowledge, values, skills, and privilege as professionals; to lead such an effort from the front.