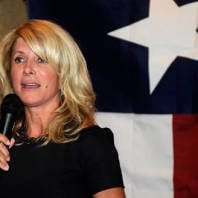 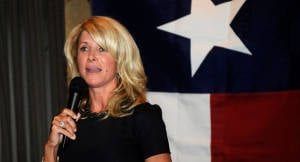 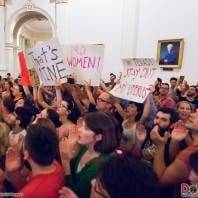 Gender Politics, In Politics? NO WAY! Earlier this week, Senator Wendy Davis of Texas stood up for women’s reproductive rights in her 11 hour filibuster to keep the 45 clinics open in Texas SB 5 would have banned abortions after the 20th week of pregnancy. She spoke with authority and on such a controversial topic that it would only seem fitting that the 24 hour news networks would have paid Davis more media attention.

Here is an excerpt from Time Magazine:

You might think that this kind of ticking-clock politics drama would be a magnet for cable news. TV news, after all, devoted considerable coverage when GOP Sen. Rand Paul held a rare one-man-speaking filibuster on the floor of the Senate earlier this year. There was a deadline, an explosive social issue, some charged gender politics in the room. “At what point must a female senator raise her hand or her voice to be recognized over her male colleagues?” demanded Sen.Leticia Van De Putte with roars from the crowd and rowdy protesters shaking the room with chants of “Let her speak! Let her speak!” Aaron Sorkin, could not have scripted it better, though he may have polished up the dialogue a bit.
Read Full Article

What was it about Rand Paul’s filibuster in the Senate that motioned for such an amplified voice in mainstream media?  Many may remember Rand Paul and his filibuster against John Brennan’s appointment to the CIA. What was it about the filibustering process that made both Senators stop their filibusters? For Rand Paul, it was biological while for Wendy Davis it was a technicality. The longest Filibuster on record is that of Strom Thurmond who was allowed a short recess for a bathroom break in 1977. With this in mind, how does the filibustering process work?

There are a few key rules about filibustering, and the first of which is that the floor must be taken with no sitting or no leaning. Wendy Davis was penalized for this rule because another senator assisted her in adjusting her back brace. The other key rule about filibustering is staying on topic. According to the chamber, she went off topic twice by mentioning the budget for planned parenthood and mentioned a sonogram bill. In Filibustering after a representative has gotten three violations, as Sen. Davis received, she can no longer hold the floor.

These technicalities were not discussed in as great detail in the Rand Paul Filibuster in March of 2013. The standards appear to be different and the media coverage was different.  However, the issue struck a chord with social media advocates and local organizers.

“LET HER SPEAK” the crowd chanted as she left the floor

Her efforts were not in vain! Organizers and protesters chanted for the last 15 minutes and ran out the clock for that final vote. 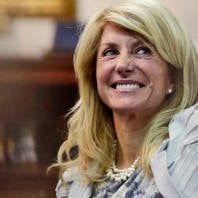 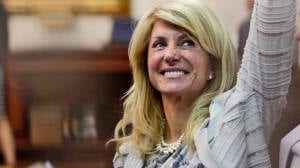 It has been quite an eventful week in politics, at the national level, and in several states. Not only did the Supreme Court hand down rulings on some key cases including DOMA, Proposition 8, and the Voting Rights Act, but the Senate amended the Comprehensive Immigration Reform bill to add stronger border security provisions, and is in the beginning stages of coming to a deal regarding student federal loan interest rates (something I am personally very happy about considering the average 6 K in Stafford loans I take each year). Besides all of that earlier this week, something magical happened in Texas.

Wendy Davis, a state Senator representing Texas’ 10th district, made national news for her 11 hour filibuster of the republican backed restrictive reproductive health bill that the Texas legislature’s leadership was attempting to railroad through the state senate. The bill Wendy said would have a “devastating impact” by enacting a 20 week abortion ban, and effectively closing almost all of the health clinics that provide abortive services, among other vital health services for women, across the state.

Wendy Davis,  a hero to many in the reproductive rights fight, stood for 13 hours without bathroom breaks, water, or food and talked. Her goal was to kill the bill by stalling the vote till after the midnight deadline for the session. “I thought that we could stop it and we did stop it, for now,” she said on a CBS This Morning Interview. However the victory may be short-lived, as Governor Rick Perry has called a second special session specifically for this bill to be held on July 1st.

Wendy Davis has become a rallying cry for those engaged in the fight against restrictive reproductive health legislation. Her courage, dedication, and unique background have become an inspiration to women, including myself, across the county. The Washington post’s Lydia Depillis published a great profile of Wendy Davis this week, bellow is an excerpt:

She knows the law. Davis became the first person in her family to graduate from college, with a degree from Texas Christian University and then Harvard Law School. She clerked, litigated, and spent a few years in the title insurance business before starting her own practice for federal and local government affairs, real estate, and contract compliance.”

The national attention she has gotten this week over her “marathon filibuster”  has many talking about the possibility of her seeking a higher office, her response “….we’ll see.” My Response to her is that I hope so, we need more strong women in politics that are willing to sacrifice for the best interests of their constituents.